Africa has the highest accident rate per flying hour in the world, according to Professor Michael Inggs of the Department of Electrical Engineering and the Radar Remote Sensing Group. The lack of regional air traffic is crippling development in Africa. In the meantime, FM radio broadcasting is experiencing a meteoric rise across the continent, serving as the dominant mass medium in Africa. These two facts may seem completely unrelated, but to members of the Commensal Radar Project at the University of Cape Town (UCT), the proliferation of FM radio waves can in fact provide affordable and safe air traffic control in Africa and the developing world.

Inggs and his team at the Commensal Radar Project, a joint collaboration between UCT, the Council for Scientific and Industrial Research (CSIR) and Peralex Electronics, have developed an alternative radar system – using FM transmissions, and a number of receivers spread out across many hundreds of kilometres and connected by cell phone links – to track the location of aircraft, with an accuracy of 100 metres or closer. This, says Inggs, is more than adequate for air traffic control safety standards. Work is currently being done to commercialise this technology.

Very few African countries have radar systems installed at their airports: South Africa has the infrastructure, and there are a couple of other radar systems on the continent, but they are few and far between. As it stands, pilots flying across the continent have to rely on a manual system to avoid aircraft collisions. “The pilots know who is taking off from where, and when, and they talk over the radio to coordinate their routes,” he says.

Inggs stresses this is a situation that cannot continue: “As the continent develops, we will see a massive growth in air traffic,” he says. But a radar system can cost around $10 million – prohibitively expensive for many developing countries, not only in Africa but also in South-East Asia and Latin America. 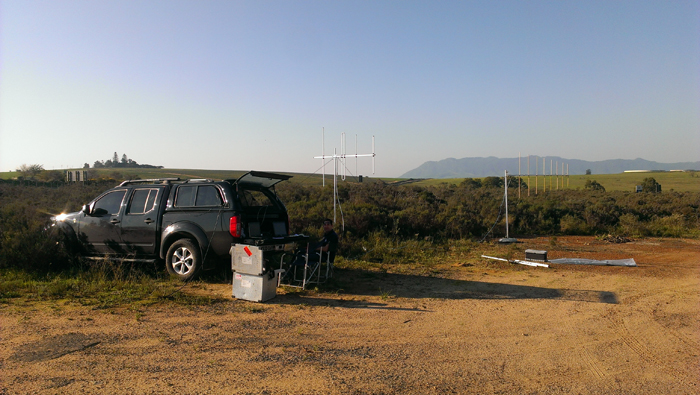 The Commensal Radar Project started around the year 2000. Inggs – who in the 1990s had dabbled a bit with using receivers to pick up the data from other, unrelated transmitters – read about a researcher in Europe who was using television signals to track aircraft, and began to investigate a similar solution for Africa. “For technical reasons, I found using FM signals more effective than television signals,” he says. As the aircraft travels through the sky, it reflects the FM signal, which is something that can be picked up through a receiver. At the same time, as the aircraft moves through the signal, a phenomenon called the doppler shift occurs. This is a change in the frequency of a wave, such as a sound wave or a radio wave, depending on the speed of an object and the position of an observer. The simplest example is an ambulance siren: when the ambulance is coming towards you, the pitch of the siren is different from when it is moving away from you.

“The word 'commensal' is a biological term,” explains Inggs. “It refers to a system where two organisms share a relationship in which one may benefit from the existence of the other, but the organisms don't affect one another.” This perfectly describes the relationship between the receivers of the Commensal Radar Project and the FM radio transmitters. The project's receivers use the FM transmission to track aircraft, but the transmitters themselves are not affected by this – they simply keep transmitting pop music and talk shows to listeners. 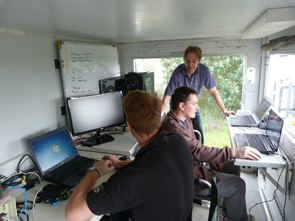 The project was a long time in the making, with a number of challenges, most of which were solved by a sequence of exceptional PhD students grappling with the applied mathematics problems faced in the project – including Craig Tong, who worked on developing and refining the software to receive and process the signals. Francois Maasdorp resolved the ambiguity over pinpointing and tracking a single aircraft when there are other aircraft on an ellipse around it. (This mathematical challenge was based on the work of a PhD student from Chad, Roaldje Nadjiasngar.) The final step was a demonstration, tracking South African Airways planes coming into Cape Town.

It is for this work that the Commensal Radar Project was award Gold at the annual AVI (Africa Aviation Innovation) Awards in late 2015. The project has also just been awarded the IEEE Harry Rowed Mimno Award for clear dissemination of technical material.

According to Alex Bassios from Peralex, this project dovetails perfectly with the company's goal to transform research into world-leading products. "We are happy to be collaborating with the CSIR and UCT on this,” he says, “and expect to surprise the world again with another innovative product from the tip of Africa.”