Land is an emotive issue in Africa, perhaps made more so by the extraordinary mineral wealth that lies beneath it. One of the continent's greatest paradoxes is the fact that the countries with the most mineral wealth are also often economically stagnant and politically unstable. Exploring – and attempting to resolve – complex issues such as these is a consistent theme in the work of Hanri Mostert, professor of private law and one of UCT's recently elected National Research Foundation (NRF) South African Research (SARChI) Chairs.

According to Mostert, we tend to think of Africa in terms of resource dependency, rather than in terms of the broader, global interdependency of resources. “In fact,” she says, “most countries' economies rely on resources such as minerals, oil and gas in one way or the other. While African countries tend to depend on the income generated by the sale and export of the resources, the availability of such resources is equally crucial to secondary economies, which need the raw materials to proceed with their production processes. Is it not interesting that in significant parts of Europe, electricity is powered by the raw materials coming from Africa?”

The interdependency between Africa and Europe specifically has profound implications for Africa's international relations, and in Mostert's view, has not yet been interrogated sufficiently. It is the focus of the Extractive Justice Project, a recent project inspired by one of Mostert's greatest preoccupations since her arrival at UCT: mineral law in Africa.

In 2008, the university's Programme for the Enhancement of Research Capacity (PERC) provided her and a team of researchers with seed funding to launch an extensive survey about mineral law in three countries: Zambia, Namibia and Botswana. The intention was for the research to be collated and published as a series of books. Once research began, however, it became clear that there was a far greater need for such texts than had been anticipated. The subsequent Mineral Law in Africa project has now grown to incorporate 12 countries, and promises to continue for many years to come. What's more, it has provided impetus for teaching exchanges between participating universities. Following a joint application by Mostert and colleagues at the University of Zambia (UNZA), the NRF in South Africa and the Zambian Council for Science and Technology are providing funding for the development of mineral law courses at UCT and UNZA, and for the development of teaching materials.

Mineral Law in Africa created interest among a broad group of internationally based scholars, academic researchers and professionals in the extractive industries, all experts in their fields – ranging from law, economics, politics history and international relations to science and engineering – to engage in the Extractive Justice Project.

Projects such as these that stretch across the continent have become hallmarks of Mostert's mineral law-related work, which includes her team's involvement in a World Bank project, the African Mining Legislation Atlas. This project aims to produce a comprehensive and electronic database of mineral law across the entire African continent. “This database makes available basic legal frameworks relating to minerals in Africa,” says Mostert. “Law scholars take this kind of information for granted too easily – these legislative texts are lawyers' primary sources, and while we expect basic legislative texts to be publicly accessible, sadly, very often they are not.”

A love of the law and the land 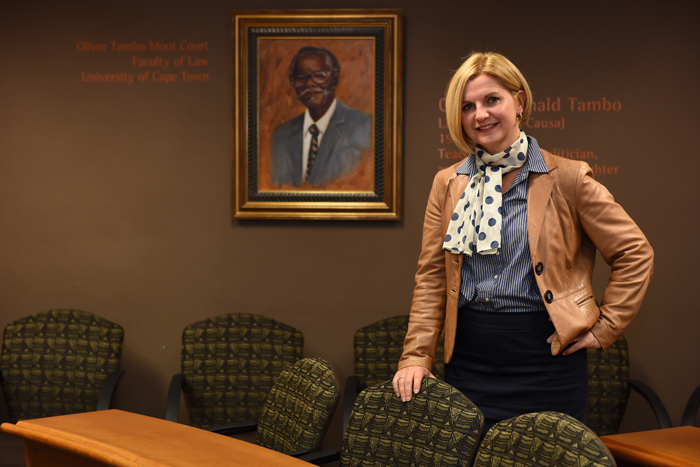 Professor Hanri Mostert is rated by the NRF as an internationally recognised researcher, and her work on mineral law has been cited by the Constitutional Court of South Africa.

Mostert's love of the law and the land were born at the start of her career. After completing her BA and master's in Law at Stellenbosch University, she won a German Academic Exchange Service (DAAD) Scholarship to the Max Planck Institute for Public and International Law in Heidelberg, Germany, where she completed her PhD and discovered a passion for deep engagement with the law. “I love the research side of things, so the institute was an amazing place to start a research career,” she says.

Mostert's PhD focused on a German-South African analysis of how property, specifically land, can be constitutionally protected and regulated. Why land? “It's a finite resource, and it has to be shared by an increasing number of people – this challenge runs through all natural resource issues, whether to do with minerals, water or land,” explains Mostert. “I was fascinated with how the interests of all the various parties who have a stake can be balanced, and how this finite resource can be distributed equitably. This is fascinating just from an intellectual perspective; but land is also such an emotive issue, and I find this combination very compelling.”

After her PhD, Mostert spent eight years on the law faculty staff at Stellenbosch University. During this time her focus on land law led naturally to an interest in mineral law. She says: “Mineral law is about both the surface and the substrate. These areas hold interest for different stakeholders (investors, land owners, communities who use the land) for different reasons. On top of that, there are environmental implications and rights to be considered.”

Mostert also points out that land use and the spatial segregation of the races in this country are inextricably linked with issues of the mines at the start of the 20th century. When the Mineral and Petroleum Resources Development Act was enacted in 2002, it precipitated a huge paradigm shift – from private- to public-based regulation of mineral law – which determined the kind of access people may have to these resources.

“The shift has been a positive one,” says Mostert, “because apartheid operated by excluding people from accessing resources, based on their inability to be the private owners of the land in which such resources were situated.” Exclusivity – the ability to exclude others from using or enjoying a particular resource – is generally seen as a main tenet of private ownership, she says. Apartheid laws manipulated this characteristic to create an advantage for a minority of South Africans.

“Because the ability to extract minerals was so closely linked to how land could be held or owned, access to subsurface resources was largely restricted to those who could own the surface. The Mineral and Petroleum Resources Development Act changed this. Now the state is the custodian of these resources.”

When talking about what the state's custodial function entails, Mostert gets excited: “State custodianship is not well defined in the law, and our courts are very cautious about attaching definite meaning to it. But it is exactly this gap that opens a space in which to create more equitable access to mineral rights, as well as better state accountability.”

Tackling these issues across the continent, however, requires a much greater cohort of highly skilled specialists in mineral law. It is the prospect of feeding into this cohort that particularly excites Mostert about the SARChI Chair. “The best thing about the award,” she says, “is its focus on creating expert capacity. It enables me to open up the discipline of mineral law to a whole new generation of prospective scholars and practitioners.”

There is a waiting list of students wishing to register for doctoral study in mineral law, she notes. “In my field, there is a far greater demand for mentoring and supervision than current capacity allows.” The SARChI initiative is generous with its support of postgraduate research, she says, “and this provides us with an opportunity to build a network of scholars who can spread their expertise to further prospective students”.

Mostert is clearly fired up about the prospects. “We teach from our own experiences, and in response to the examples we were given,” she says. “A good PhD experience can really make a difference to the building of a discipline.”

As the holder of a SARChI Chair, Mostert can grow her current cohort of ten PhD students and supplement their supervision with highly qualified postdoctoral staff. She is a strong believer in the value of peer mentoring, having organised her current cohort of PhD students into a tight group that meets for weekly writing circles. “Each individual brings a set of talents to the group,” she says, “and so they strengthen the skills of others. For me, this sharing of human resources is the most valuable of all the aspects of our academic exercises at the Chair.”

It is the ways of sharing of natural and human resources that Mostert finds most compelling. The relationships excite her: between land and law, surface and substrate, the jostling between the rights of the people who own, work and live on the land and beneath it – and between the scholars studying it.

“My husband teases that as someone who studies the law of something as static as the earth's surface and subsurface, I should travel much less than I do,” she laughs, “but for me, these questions – and how the law here and elsewhere deals with them – are endlessly fascinating.”