Small-scale fishers have a low carbon footprint and play an important role in the food security, economy and culture of coastal villages, yet they remain a marginalised group in South Africa – lacking rights, a say in the management of their resources, and empowerment in the market chain. Dr Serge Raemaekers is working with fishers and government to develop a smartphone application that will empower the fishers, and possibly completely change the power dynamics in their sector.

If you take a look at the menu of your average restaurant in just about any coastal town, you'll find more or less the same variety of fish: hake from an industrial fishery, calamari imported from places like Argentina, Mozambican or Asian prawns; and then linefish, possibly caught by small-scale fishers, but sourced through a series of middlemen. What you generally won't find, according to Raemakers, a lecturer/researcher in the Department of Environmental and Geographical Sciences , is high-quality, fresh linefish, sourced directly from local small-scale fishers.

This disempowerment and marginalisation suffered by small-scale fishers began long before the apartheid days, says Raemaekers, and has continued into the democratic dispensation, as post-1994 deliberation regarding fisheries was strongly dominated by industry and organised labour. Both groups resisted the redistribution of resources to traditional, small-scale fishers – who at that time were not well organised – and the post-1994 fisheries policies reflected this bias.

In 2004, a group of small-scale fishers turned to the Equality Court to fight for their right to earn a living through fishing. The fishers were successful in the court battle; and in 2007, government embarked on a five-year participatory process, which culminated in the development of a small-scale fisheries policy focused as much on human rights and socio-economic development as on fish stocks and sustainability. 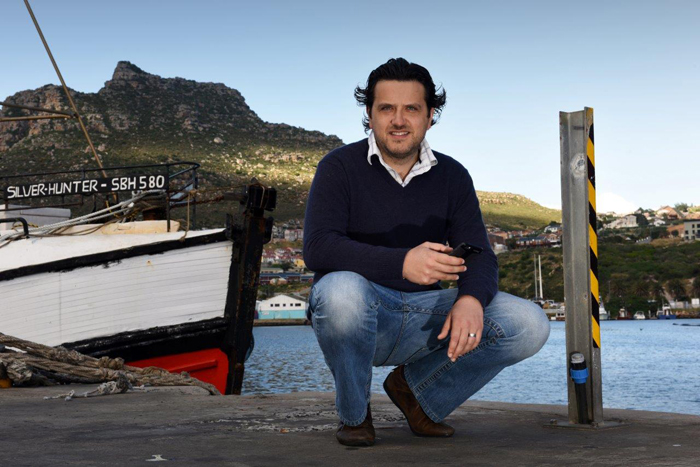 “This policy is a radical paradigm shift,” says Raemaekers, who served on the government-established National Task Team responsible for drafting the new small-scale fisheries policy. “The development of the policy was an intensive participatory project, but it doesn't stop there. The next challenge lies in implementation.”

It was thinking about the challenges of policy implementation that led Raemaekers, together with Abongile Ngqongwa, a fishery manager from the Department of Agriculture, Forestry and Fisheries (DAFF) and fisher and community worker, Nico Waldeck, to the idea of creating a smartphone application (app) to be a one-stop shop for small-scale fishers to record their catches, engage with government at the co-management table, enhance their safety at sea, and explore different value-chain opportunities. The app is called 'Abalobi', the isiXhosa word for small-scale fishers, as referred to in the policy.

“There are two major problems with the small-scale fishing sector that spurred us on to working on the development of Abalobi,” says Raemaekers. “The first is the big gap between scientific knowledge and local fisher knowledge. The very contextualised local knowledge does not make its way into fisheries management; but also, the scientific understanding of fish-stock models does not always gel with the local knowledge owned by fishers.” Part of what Raemaekers and his team hope to achieve through Abalobi is to build trust between the relevant role players, including government and scientists, creating relationships where groups can work together to complement different knowledges and local data, and to achieve greater understanding of fish resources and of how best to implement policy.

A second gripe for Raemaekers is that small-scale fishers are mostly 'price-takers', stuck in a system of servitude in which they are just working to pay back last year's loans. “These fishers don't often get a good price for their catch. Even though this is potentially the most sustainable and socially just fishing practice in our inshore waters, these small-scale fishers are not empowered in the value chain.”

Simple information-sharing and communication between fishers could free them from this trap. As part of the Abalobi project, a chat (smartphone-based instant messaging) integration was developed that allows fishers – who had had no contact with each other previously – to communicate with one another.

Raemakers tells a story of a group of fishers in Struisbaai, part of the pilot programme, who used this tool to set a minimum price for their linefish – before the first boat came into the harbour. “It sounds so simple,” he says, “but for these fishers, it was a total shift in the power dynamics. They all worked together, and got a better price.” There are knock-on effects, too. As fishers from different parts of the coastline start communicating, they also begin sharing information and skills to help one another. These fishers may never have met, but they are in the same sector and working towards the same goal.

Abalobi, which is still in the pilot stage, has a number of planned modules. One of the core modules currently being pilot-tested is Mobile Catch Reporting, through which both fishers and government monitors capture data and access easy-to-understand dashboard analytics. At the moment these processes are separate: the fishers capture their information about a catch, and they own that data. They decide who can see it and how it is to be used. At the same time, government monitors are also capturing data. “The plan is to have regular workshops for engagement between government and fishers, to discuss the data – what the differences are, and why,” explains Raemaekers. “We are embarking on a process of building trust, co-producing knowledge, and working together to ensure responsible governance of the sector.”

Other modules include a focus on safety at sea, connecting fishers to markets and consumers, and building a knowledge hub for fishers to keep on top of the latest trends and regulations.

Raemaekers has been working closely with both the fisher community and the Department of Agriculture, Forestry and Fisheries on Abalobi. The key for him is that this is not an academic exercise, but a community-owned and -led open source project. “This is a really transdisciplinary endeavour,” he says. “Abalobi not only brings together scientists, government, industry and community, but also encompasses natural sciences, social sciences and information technology.

“This is not about a team of IT people developing yet another app. Abalobi is a project by the small-scale fishing community themselves, to own the process of implementing the policy they fought for.”

The Abalobi project (www.abalobi.info) is currently funded through Raemaekers' NRF research grant and with DAFF's small-scale fisheries directorate support. The project will require dedicated funding to enable a full-scale roll-out.