When Dr Suzall Timm decided to focus on waste collecters in Cape Town for her doctoral thesis, she uncovered a mound of fascinating material. Timm graduated with a PhD in criminology on 19 December 2015.

Dr Suzall Timm was on the lookout for a topic for her PhD when she came across an article in the newspaper about landfill pickers in Cape Town.

It suited her perfectly.

She'd been looking for an environmental topic that related to people's lives. Her previous studies had been on drug use in teenagers in her home town of Worcester, and policy debate around women prisoners.

Examining the lives of informal waste pickers and the way in which they were being regulated in the city and others seemed like a logical extension to her earlier investigations into understanding what enables or constrains the everyday lives of those living in poor communities.

It was also an area ripe for the picking, so to speak, as not much research had been done in Cape Town on the subject.

And so between 2008 and 2011 she took to the streets to do her empirical research.

Timm spent time in the streets of Rondebosch, Rosebank and Observatory close to UCT's campus on bin days to do interviews and observe how waste-pickers operated.

But she didn't stop there. 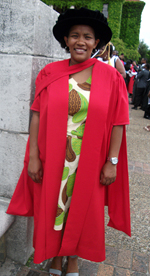 As Timm explains: “I discovered there were three main categories of waste collectors: The skarrelaars (the people you see on bin day); the carties (or cart horse operators) and the bakkie brigade.”

She found that the skarrelaars were not only subject to city restrictions, but were also being regulated by city improvement districts, local residents and neighbourhood watches.

Because of a lack of mobility, they would only collect certain types of waste that had some market value at a particular time and would avoid collecting waste that might bring them into conflict with the authorities.

The carties, on the other hand, tended to focus on scrap because they had the means to move it around. Many people in this category had a history of working with carts that stretched back for generations to hawking vegetables in District Six.

The bakkie brigade acted as “middle men” buying waste from the skarrelaars and others to sell on. (She also uncovered waste pickers in the townships who tended to specialise in collecting only one kind of bulk material, such as glass, to sell on to the bakkie brigade.)

While Timm was not able to quantify the total value of the informal waste business, she established that street pickers could earn between R25 and R60 a day, while the township pickers might earn around R50 for waste sold to bakkie brigade operators, making this very much a “subsistence” activity.

She also realised there was a murkier side to waste collection in the form of crime syndicates who controlled particular activities such as plastic milk crates or scrap.

All of this activity was regulated by a variety of authorities, from the police through to the city's Copperheads, the Carthorse Protection Association and even neighbourhood watches.

What also impacted on waste collection was whether people had the means to move volume, or whether they were constrained by their lack of mobility.

This is where nonhuman elements came into play – from the trolley used by the street picker to the horse and cart and even the kind of waste that was being gathered.

Hence, in the citation, her thesis is described as providing “a better understanding of how urban social order is created and contested: first by embracing a broad conception of agency; second by demonstrating that agency is distributed across the human-nonhuman divide.”

With so much data in the bag, it was a challenge for Timm to narrow down her focus and her thesis includes in its addenda many of the individual stories she gathered along the way.

This wealth of material also opens the way for postdoctoral work.

Timm plans to spend the next year writing up thesis chapters and some additional material for publication.