Understanding evolution might help us understand patriarchy and xenophobia

Evolution has drawn more criticism from non-scientists than any other scientific theory, probably because it speaks to the origins of humanity.

Much is therefore at stake. And despite the mountains of evidence in support of evolution, there is still much opposition to it. Opposition stems largely from evolution's unintended consequence of removing humanity from the pedestal of special creation.

Evolution also does not claim that extant non-human primates, including monkeys, baboons, chimpanzees and gorillas, if given enough time, will evolve into humans.

The truth is we cannot predict with any degree of certainty what form the descendants of any living organism will evolve into 10,000 or one million years from now. There are just too many variables to consider and the process of evolution includes a component of randomness.

But a better understanding of how humans evolved and how that affects human behaviour can unlock alternative and workable solutions to societal problems.

Life propagates through the duplication of DNA and transference of that DNA from parent to offspring. Offspring are not exact copies of each other or of their parents as a result of mutation and sexual reproduction. This results in differences among individuals in the traits they possess, including size, shape, colour and behaviour.

Life plays out in time and space – in some kind of habitat or environment. Differences among traits of individuals will translate into differences in how long individuals live or how many offspring they produce.

Differences in survival and reproduction result in a change in the relative proportions of individuals in subsequent generations. This is evolution.

Resources are finite and natural selection occurs because individuals have to compete for the resources they need to survive and reproduce. These include sexual partners, food and living space. In species with separate sexes, the costs of reproduction are different for males and females.

For example, reproduction in female mammals involves energetically expensive eggs, which provide the nutrition needed by the developing zygote, a lengthy pregnancy, and energy-rich milk for the baby.

In contrast, male reproduction involves sperm that has relatively little investment of energy. Over the span of their lives males produce millions of sperm. Their reproductive potential is never tied up by pregnancy or milk production. This gives males the potential to impregnate hundreds of females.

In social animals, males may form alliances that improve their access to resources and therefore to females. The differential costs of reproduction and the male alliances that such costs promote has the potential to explain many phenomena observed in human and non-human animal societies. 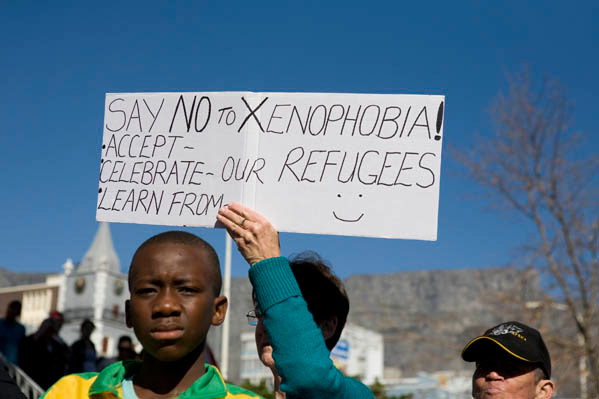 Photo by Janah Hatting [CC BY 2.0], via Wikimedia Commons.

For example, it might explain not only why xenophobic and gang violence occurs in human societies but also why these behaviours are largely restricted to impoverished communities and perpetrated almost exclusively by young males in the prime of their reproductive potential.

Male alliances are evolved strategies that allow males greater access to females. Groups of males can compete more effectively than individual males for resources and females. A potential solution to some societal problems may be to reduce competition among males for females. This can be done by reducing poverty through a more equitable distribution of resources so that competition is reduced.

Another way is to improve access to resources by females through equality of education, opportunity, and employment equity. This may reduce competition among males because controlling resources would no longer be important for access to females. In short, patriarchy must fall.

Competent delivery of key socioeconomic services by governments is crucial for tackling many of the ills associated with competition for scarce resources. This includes the recent xenophobic attacks in South Africa, which have been blamed on the fierce competition for scarce jobs between locals and foreign nationals.

We accept that there are sets of human behaviours which are similar despite differences in race, culture and gender. We call this human nature. Fossils provide us with evidence that our physical form has evolved. The existence of human nature is evidence that our behaviours have evolved. Evolution therefore provides us with a tool to scientifically investigate the causes of human behaviour.

Parts of this article were taken from the author's forthcoming book, Evolution's Chimera: Amazing Adaptations in Bats, to be published by University of Cape Town Press.