The argument for the use of police body cameras is gaining momentum in South Africa, amid growing demand for greater police accountability, especially in the wake of the Marikana massacre.

The cameras are typically worn on the chests of police officers. Their use is becoming common globally.

The police say they are discussing the use of technology, including body cameras, to improve communications and for the safety of officers. South Africa has a high rate of police murders.

The case for police-worn body cameras

A recent study involving the random assignment of body cameras to half of the 54 patrol officers in Rialto, California, showed:

... shifts without cameras experienced twice as many incidents of use of force as shifts with cameras.

In a recent examination of allegations of police inefficiency in Khayelitsha, a township for black people in Cape Town, criminologist Andrew Faull suggested body cameras could improve the ability of police management to monitor officers' interactions with civilians.

It also cited the Igarape Instute's Smart Policing Project. The project consists of an app for smartphones that tracks video, audio and GPS coordinates passively and in real time. It aims to improve police accountability and strengthen public safety in low- and middle-income settings in Brazil, Kenya and South Africa.

South Africa ran a one-month pilot scheme under the Smart Policing Project in October 2014. The South African Police Service and the Cape Town municipal police declined to participate because the technology was not stable. According to Gideon Morris, the provincial secretary for police, the focus of the pilot was:

... to get the technology stable enough and to try and expand the use of it once they know that the prototype is working fully. Once this had been achieved the discussion with SAPS will be resumed.

Nevertheless, traffic officers from the National Department of Transport who took part in the pilot were not averse to wearing body cameras. They responded positively, saying their actions were questioned less by the public who knew they were being recorded.

Incidents of police brutality are an ongoing problem in South Africa and body camera technology may help reduce them. Among the most recent high-profile cases: 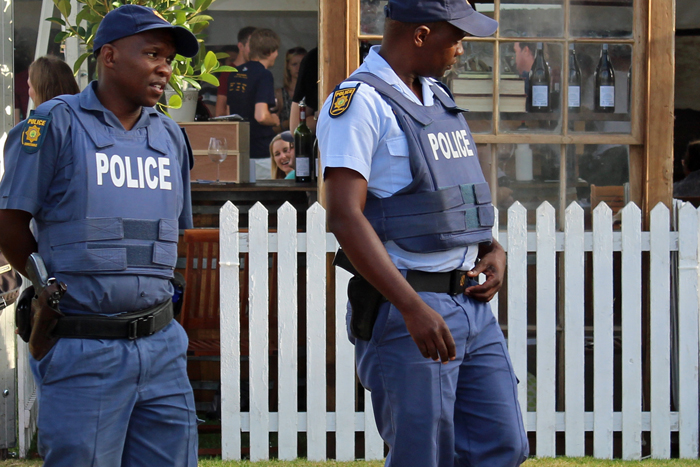 Use of technology not without risks

The advantages of body cameras seem obvious. The civilian oversight forum report highlighted the potential benefits of recordings, including for police training. Research from Scotland supports the evidentiary benefits of body cameras, saying they expedite resolution of cases.

They also provide additional protection for the police from public complaints. That way, they may even reduce the costs to the state from civil claims.

But the use of footage is not without unintended consequences. In Australia, it was found that a victim's demeanour at a scene often differed greatly from what was presented in the courtroom. Footage depicting the initial reactions of a victim compared to the post traumatic aftermath can result in a victim essentially being re-victimised in the process.

The disadvantages of cameras also relate to privacy issues for both the police and the public.

Among the hurdles to the use of technology in policing is the the need for enabling legislation, especially to cover cases where privacy and evidential matters arise. Unfortunately the law will always remain light years behind technology.

The Electronic Communications and Transactions Act governs the admissibility and evidential weight of electronic evidence in court.

The South African Law Reform Commission has recommended changes to legislation to address the issue.

The use of body cameras in South Africa is an inevitable, welcome progression. But for this to happen, both the public and the police must actively embrace the technology for their mutual benefit.

There also needs to be discussion about the extent that these technological advances can help or hinder academic research of the police. Police are notoriously difficult for researchers to access. Will it mean they have a legitimate reason to exclude personal access and require researchers to study camera footage instead?