Bones, birds and dinosaurs: the tale of an accidental palaeobiologist

When a young Anusuya Chinsamy told the apartheid state she needed to study at the 'white' University of the Witwatersrand because of its excellent palaeo-anthropology department, she did not expect to spend a lifetime in the palaeosciences, or that she would go on to become a global leader in the field.

When Chinsamy was growing up in Laudium, an Indian area on the outskirts of Pretoria, her dream was to be a high-school science teacher. Her father, however, encouraged her to get a degree before undertaking a teaching diploma. After matric, she was accepted to study a Bachelor of Science (BSc) degree at the University of the Witwatersrand (Wits); but because of the legislated racism of the apartheid state, black students could not get automatic acceptance to a 'white' university such as Wits. As an Indian woman, Chinsamy first had to get ministerial consent, and stipulate why she could not study at one of the universities that were then classified as 'black'. On the advice of those who had been through similar experiences, Chinsamy wrote in her ministerial application that she wished to study at Wits because it was a world leader in palaeo-anthropology. At the time, Anusuya intended no more than to complete her BSc in biology and zoology, and then become a teacher.

In fact, Chinsamy went on to specialise as a palaeobiologist, studying the biology of prehistoric animals. Today the young Anusuya Chinsamy from Laudium is Professor Anusuya Chinsamy-Turan, head of the Department of Biological Sciences at UCT, and an internationally recognised expert in the palaeosciences.

“A palaeobiologist assesses every possible line of evidence associated with a fossil, in order to better understand it as a once-living animal,” explains Chinsamy-Turan. “My speciality is to look at the fossil bones themselves, which – even after millions of years of fossilisation – have preserved the microscopic structure of the bone that records key aspects of their biology.”

To examine this microstructure, Chinsamy-Turan embeds a dinosaur fossil in resin. Then she slices off a very thin section of this bone, about half the thickness of a single human hair, and examines it under a microscope.

Using this methodology, Chinsamy-Turan was the first person to deduce growth curves for dinosaurs. What she found was that rather like trees, dinosaur bones contain 'growth rings' that can be used to assess the animal's age. The growth rings also show that dinosaur growth was affected by seasonality, much like many reptiles alive today.

Reptiles – unlike mammals, which grow very quickly up to a certain point, and then stop – continue to grow quite slowly throughout their lives. During warm, favourable seasons, reptiles such as turtles or crocodiles grow much faster; but that growth slows down if it gets cold. “What makes dinosaurs so interesting,” says Chinsamy-Turan, “is that like reptiles, while their growth was affected by seasonality, when the climate was favourable they would grow as fast as birds and mammals.”

The similarities and differences between dinosaurs and birds is a particular passion for Chinsamy-Turan. “It is well known that birds are descended from dinosaurs,” she explains. “But less understood is the evolutionary path dinosaurs took to become the modern birds we know today.” 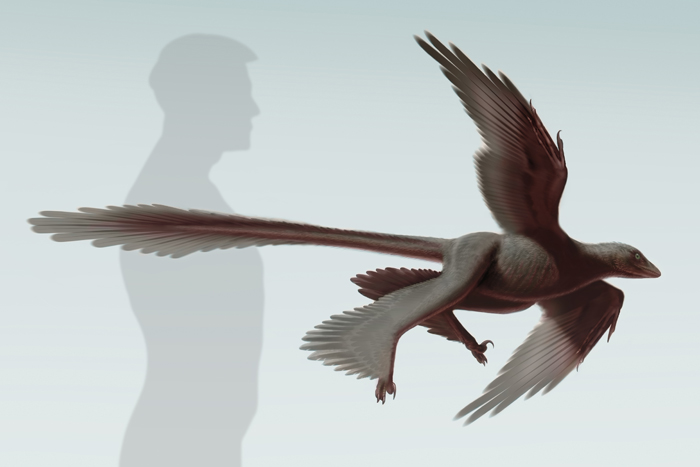 Changyuraptor yangi, a long-feathered predatory dinosaur that sheds light on how dinosaurs flew, and whose bone microstructure Chinsamy-Turan analysed to determine its age.

We can track a number of the stages in this evolution through the fossil record. For instance, dinosaurs increasingly acquired birdlike characteristics, such as toothless beaks (some of the early birds had teeth), and lost some of the more dinosaur-like traits, such as clawed fingers, a long bony tail, and dinosaur-like growth patterns. “Many of those early birds grew much more slowly, and would take several years to reach adult body size,” says Chinsamy-Turan, “whereas modern birds reach maturity in a matter of a few weeks.”

In fact, Chinsamy-Turan was the first palaeoscientist to study these early birds, and it was this work that led to her first publication in Nature. During a postdoctoral fellowship at the University of Pennsylvania, she worked on three early bird fossils from Argentina.

“I remember the exact moment I looked through the microscope at this slide and thought to myself, this is a Nature paper,” she says. “I could tell immediately that this was something so different to what we understood at that point.”

Today there are about 20 Mesozoic birds that have been studied histologically, but – she notes with some pride – after all these years, her research on those early birds back in 1994 remains a landmark study. Since then she has published extensively, both in international scientific journals (including Nature and Nature Communications) and in the popular press. She has also published two popular-level books: Famous Dinosaurs of Africa, and Fossils for Africa, which have gone a long way towards promoting science in South Africa – another passion of Chinsamy-Turan's.

It was largely thanks to her father, who was her biggest supporter, and always pushed her to be more, that Chinsamy-Turan ended up on her career trajectory. Not only did he talk her into getting a degree in the first place; he also convinced her to do her honours before she completed her postgraduate teacher's diploma. By the time she'd completed her teaching diploma, the research bug had bitten, and she went back to Wits to continue postgraduate studies in the field of palaeontology, thereafter specialising in palaeobiology.

“My father is an amazing man,” she says. “When I was growing up under apartheid, few Indian men encouraged their daughters to be independent and well educated, but my Dad was adamant that my sisters and I do just that.”

She feels fortunate to have grown up in a home without gender stereotypes: nobody ever told her she could not do something because she was a woman. “So I grew up being able to do everything and anything I wanted to.”

It was perhaps this 'go-getter' attitude that led her to submit not one but two academic papers to the very first international conference she ever attended. After this meeting, she was invited by two renowned palaeontologists – Dr Jack Horner, of the Museum of the Rockies (who served as technical advisor on the Jurassic Park movies), and Dr Peter Dodson, of the University of Philadelphia – to pursue postdoctoral research in the United States. Anusuya chose Philadelphia, and says that those years were an incredible eye-opener for her. “It was here that I realised I could play on the international stage,” she says.

Today, Chinsamy-Turan has certainly achieved this ambition. Yet in a way, she has also returned to her first; even though her position as head of department at UCT means a great deal of extra work and responsibility, she says, she still makes time to teach and do her palaeobiology research. “Today, I'm the science teacher I always wanted to be…” she laughs, “…just at a very different level.”

Chinsamy-Turan's advice to the next generation is to refuse to be bound by limitations. “Follow your heart and do what you love, and the rest will follow.”