Dr Robyn Pickering is hard at work on UCT's new dating laboratory, due to be launched on 22 October. The lab builds on UCT's reputation in geochemistry, rooted in the radiogenic isotope facility set up 10 years ago.

Coupling her interests in geology and palaeoanthropology, Pickering qualified as an isotope geochemist and has dated some noteworthy fossil finds: Australopithecus sediba at Malapa, a significant South African hominid site, and a million-year-old fossil monkey from the Caribbean that vanished 3 000 ago.

The results of the fossil monkey dating, work done while she was at the University of Melbourne, were announced just three months into Pickering's UCT appointment at the Department of Geological Sciences.

Fresh from a six-year stint as a postdoc in Professor Jon Woodhead's lab at Melbourne, Pickering's job is to set up a “clean” uranium series dating laboratory (using uranium-lead and uranium-thorium) in the department.

This will be Africa's first such facility and an asset to researchers in an era of tantalising fossil finds where dating is crucial for their placement in a chronology of evolution.

Pickering's special skills set is best illustrated by two photographs. In one she wears a clean lab suit, required for working in the lab with uranium and lead used for dating speleothems, a “catch-all” phrase for calcium-carbonate deposits that form in caves and often sandwich or cling to fossil remains. In the other she has a helmet, climbing harness, ropes and carabiners, all set to abseil down to a cave at Pinnacle Point, a dizzying drop above the foaming sea at Mossel Bay. (She's that keen to do her own fieldwork!)

Pickering has worked mainly in South African caves (dolomite makes for good caves) with their rich deposits of early human fossils. She's also  worked alongside international teams at archaeological and palaeoanthropological sites along the southern and western coasts of South Africa, Australia, East Africa, Armenia and the Dominican Republic.

Two valuable finds have brought her work to the fore: Austalopithecus sediba, discovered by Professor Lee Berger (of Homo naledi fame), and the more recent dating of a tibia belonging to the million-year-old fossil monkey (Antillothrix bernensis) found in a freshwater cave in Altagracia Province in the Dominican Republic in the Caribbean. 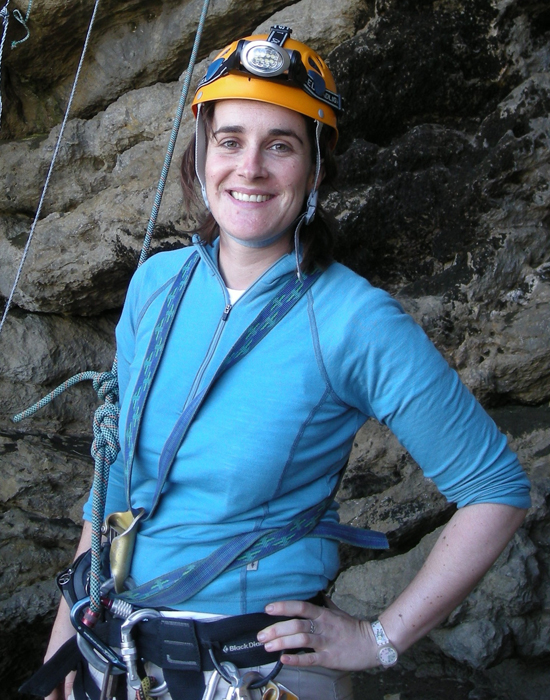 The geologist in the field. (Photo by Andy Herries.)

Pickering was the lead researcher involved in dating the limestone surrounding the monkey fossils, the limestone samples travelling between the Caribbean, North America and Australia where they finally reached her.

“Scientists had long been puzzling over the age of primate fossils from this region – since the days of Darwin and Wallace,” she said at the announcement earlier this month.

Pickering and her former PhD student at the high-tech Isotope Chronology Laboratory at the University of Melbourne, Dr Helen Green, measured the levels of uranium, thorium and lead in the samples. The results pegged the fossil monkey, about the size of a small cat, to around 1.3 million years old.

“The presence of endemic New World monkeys on islands in the Caribbean is one of the great questions of biogeography, and now knowing the age of these fossils changes our understanding of primate evolution in this region,” she said. “Our analysis of the fossils shows that Antillothrix existed on the island of Hispaniola for over a million years relatively unchanged morphologically.”

But 3 000 years ago the monkeys went extinct, probably when humans began to inhabit the islands.

Closer to home, Pickering was part of Lee Berger's team that dated the fossilised bones of Australopithecus sediba at the Malapa Fossil Site five years ago. After making the find, Pickering says Berger ran to the top of a koppie to find a signal and emailed her: “You've got to date this!”

Earlier in September Berger, a research professor at the Centre of Excellence in Palaeosciences at Wits, made headlines in September with another rich find, the identification of a new hominin species called Homo naledi at the Rising Star Cave near Johannesburg.

With 1 500 bones and 140 teeth from 15 skeletons, these fossils have not yet been dated.  There is no geological material that can be dated attached to the remains and, as yet, no animal bones to provide clues.

With a launch date of 22 October, she's hard at work on UCT's new dating laboratory, which builds on UCT's reputation in geochemistry, rooted in the radiogenic isotope facility set up 10 years ago.

Much of her experience comes from working with leading geochemist and isotope geologist Professor Jan Kramers from Bern in Switzerland.

Kramers wanted to use uranium‑lead techniques to date South African caves and Pickering ended up doing greenfield research for her PhD, developing a uranium-lead dating technique for the flowstones (geological material that forms at the base of stalagmites) at three of the country's big hominid sites: Sterkfontein, Swartkrans and Cooper's Caves.

The new controlled or 'clean' facility is vital to the work of geochemists and archaeologists.

“The isotopes we work with occur in very low concentrations in the rocks we analyse. There's more lead in a fingerprint than in my samples, so I have to work in an ultra-clean lab; the air heavily filtered to avoid lead pollution coming in from petrol fumes.

“We also work with very strong acids, radioactive traces and radioactive standards. The lab suits protect us but also stop us from contaminating the samples.

“My role is to set up the uranium-thorium and uranium-lead techniques of uranium series dating in the lab here at UCT to be able to continue the work of dating the homind sites. So it will be the first uranium series lab in South Africa and Africa.”

Pickering moved to Cape Town with her New Zealander husband Warrick Joe and their two-year-old Lucy, who is in her dad's care to give Pickering this opportunity.

It was too good to miss.

Young women academics are particularly vulnerable at this stage of their professional lives,  says Pickering.

“It's the “leaky pipe syndrome”, where young women leave academia to raise children.”

While men's academic careers are more even and linear, there's huge attrition of women around this early career researcher stage.

“This is where women are lost,” added Pickering. “We need a simple system to make is easier to enable women to come back to work.”