An emeritus professor in the School of Geosciences at the University of the Witwatersrand, McCarthy has devoted more than 30 years of research to the study of the Okavango Delta ecosystem, “terra incognito”, as it was when he and his team began work there.

The Okavango, an alluvial fan and not a delta, is a network of waterways, islands and levees, some 250km from top to bottom, and made up of permanently flooded, seasonally flooded and occasionally flooded regions.

It formed in a depression caused by the southwesterly propagation of the East African Rift Valley.

“It's probably the best preserved of the world's large wetland ecosystems,” said McCarthy. “Lack of development by the Portuguese, the civil war in Angola after independence and mosquito- and tsetse fly-borne diseases spared the region from colonial exploitation.”

He said that although various government agencies had generated good maps, aerial photographs and a large body of hydrological, geological and climatic information on the Okavango by the 1980s, its ecosystem was little understood.

Why did the channels of water through dense papyrus change form and direction over the years? What caused papyrus blockages and failure of the channels? How did the levees form? What role did hippos and elephants play − and even termites?

It's taken years of field trips and collaborations (McCarthy worked with a corps of multidisciplinary experts that included UCT's Emeritus Professor Heinz Ruther and Emeritus Associate Professor Charles Merry, among others) for him to piece together the puzzle of this complex ecological system. 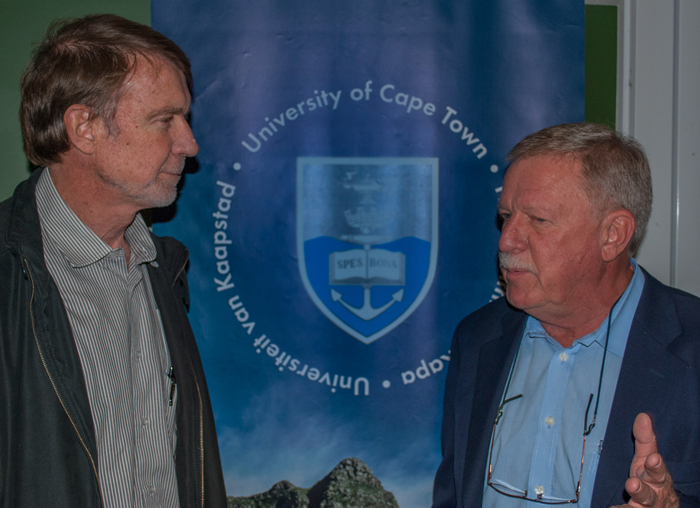 “But the processes that regulate sedimentation are almost all biological in origin.

It's managed by the biota and is constantly changing; it's a remarkably resilient system.”

Some of the fieldwork was conducted from a houseboat, a 'platform' from which McCarthy and his research team surveyed the network of waterways, islands and levees between Shindi to Shakawe, a channel distance of some 300km.

“We sailed up the Nqoga channel from the distal end to the headwaters in a houseboat in 1987. By 2002 part of the channel we used had disappeared, the trees had died on the surrounding islands, which had 'drowned' and been encroached by papyrus. A new channel had formed elsewhere.”

Curiously, these new channels “nucleate” on hippo paths through the dense aquatic vegetation. Hippos use these to access nutritious grass on the islands. These networks of trails pick up surface flow from dying channels and erode to form new channels.

“This is very important for the ecosystem,” said McCarthy. “Elephants too use trails to cross from island to island, but they have less of an impact on the Okavango ecosystem.”

Another mystery was the absence of salt in the Okavango, given the fact that about 90% of its annual flow is lost to the atmosphere. The observation that many of the islands were crusted with sodium bicarbonate provided a clue as to how the water is lost.

“Further investigation showed that the groundwater under the islands contains sodium bicarbonate, the result of transpiration by trees and other vegetation on the edges of these islands.”

The water table under these islands is also lower than the water level in the surrounding swamps. At night the water table rises beneath the islands edges because trees transpire more during the day.

“Trees maintain a net flow towards the island centres where salt accumulates in the groundwater, causing it to become more dense. This keeps the surface water fresh.”

Working with a climatologist and mathematician, McCarthy found that droughts in the Okavango region seem to occur in cycles of about 80 years, which appear to coincide with the sunspot cycle.

“This suggests that solar insolation causes doughts in the region.”

Much of the Okavango's unique character is because its catchment lies on desert sand, which now supports a tropical forest, the result of climate change.

“The water flowing from this catchment has little in the way of dissolved solids and silt and mud; the particulate sediment load consists mainly of sand.

“Biota collectively manage the accumulation of the sediment in a way that results in constant change, maximising the delta's habitat diversity,” said McCarthy.