The Cala Reserve Community have had their right to appoint their own headman affirmed, after a Full Bench of the Eastern Cape High Court unanimously dismissed an appeal by the Premier of the Eastern Cape to overturn a judgment by a lower court on 18 August 2015.

The decision will have far-reaching implications for the role of traditional authorities in the Eastern Cape and possibly even nationally, says Professor Lungisile Ntsebeza, AC Jordan Chair in African Studies and holder of the National Research Foundation (NRF) Chair in Land Reform and Democracy at the University of Cape Town. "Unless this judgment is challenged," he says, "the Eastern Cape will have to review the whole system by which they appoint their headmen."

Professor Ntsebeza presented expert evidence on behalf of the Cala Reserve Community: "The arguments presented in the judgment have dealt a massive blow to the manner in which the Eastern Cape government interpreted customary law rules relating to the appointment of chiefs and paramount chiefs in the Eastern Cape," he says.

The saga started in 2013, when the long-serving headman of Cala Reserve, Mr JH Fani, tendered his resignation. As had been their custom, the residents called a community meeting and elected Mr Gideon Sitwayi – a sub-headman, and Fani's de facto deputy – as their new headman. However, the amaGcina Traditional Council rejected their choice – apparently because he was not a member of the royal family.

To the dismay of the community, Chief Gecelo, head of the council, imposed his own choice on them: Mr NJ Yolelo, his clansman. He cited the Eastern Cape Act, which, he said, instructs the royal family to elect the headman, telling them: "Nokuba niyathanda okanye anithandi na, yiroyal family ethata izigqibo ngokubekwa kwenkosana [Whether you like it nor not, it is the royal family that decides on the headman]."

The community wrote letters of complaint regarding the Chief's appointment to the Premier of the Eastern Cape (Mr Phumulo Masualle), the MEC for Local Government and Traditional Affairs (Mr Fikile Xasa) and the Qamata Regional Traditional Council. Their complaints were rejected.

As a last resort they approached the Legal Resources Centre (LRC), which launched an application in the Eastern Cape High Court on their behalf against the decision of the Premier. The Court found in favour of the Cala Reserve community on 9 October 2014 – but the Premier of the Eastern Cape appealed against this decision.

It was this appeal that was dismissed by a full bench of the Eastern Cape High Court in August this year. 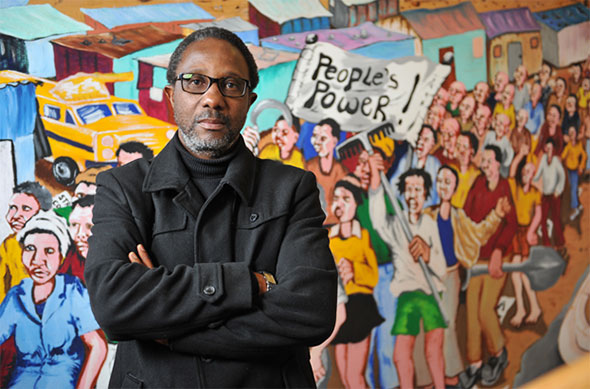 Ntsebeza was able to provide incontrovertible evidence that the community were right in their assertion that they had elected their headman for over 100 years. Having conducted extensive research into the history of traditional authority in the Xhalanga district, he could give a detailed account of the history of electing headmen in this area, including Cala Reserve, going back to the 19th century. His evidence was particularly strong because he had written sources – including from government and the church – to corroborate the oral testimonies he collected. "I had a tweetalige woordeboek [bilingual dictionary]," says Ntsebeza, "because most of the interpretation of what was happening was from the viewpoint of missionaries, including Afrikaans missionaries."

Ntsebeza also drew attention to a provision in the Traditional Leadership Governance Framework Act, which states that the royal family can only appoint a headman after taking into account the practice of the community. The practice in Cala, clearly, was to elect their own leaders.

"The only evidence as to the customary law in the Cala Reserve concerning the identification of the headman is that tendered on behalf of the respondents by Professor Ntsebeza," Judge J Plasket wrote in his judgment. "His evidence stands unchallenged. It is the only admissible evidence on the issue. No reason was advanced as to why it ought not to be accepted."

This flies in the face of the argument put forward on behalf of the Premier, which was that communities do not have the right to elect their headman or even to be consulted under post-constitutional legislation. Yet "even a dictator and despot such as Chief KD Matanzima failed in his attempt to change established practices and tradition, including the election of headmen", wrote the judge, quoting Ntsebeza.

Astonishingly, the judge notes that the Premier "... conceded that the effect of this argument was that the people of the Transkei region enjoyed greater democratic rights in respect of the identification and appointment of headmen under homeland rule than they do under a democratically elected government".

With this judgement, however, communities under customary law should see an increase in their democratic rights, at least in the Eastern Cape.