A book to grow Africa's next generation of researchers

Emerging researchers across the spectrum – from those who already enjoy recognition to those who are just starting out – are likely to benefit from a new publication flowing from the Emerging Researcher Programme (ERP).

Growing the Next Generation of Researchers: A handbook for emerging researchers and their mentors, by Dr Lyn Holness, arises out of the work of the ERP which is hosted within the Research Office.

As with the ERP, the book responds to the concern that the majority of South Africa's research output is still produced by an aging population of predominantly white academics. 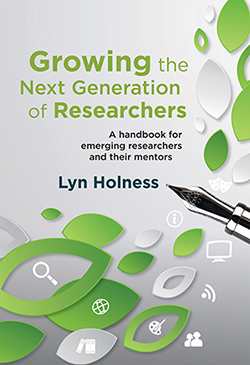 At the launch, Professor Danie Visser, deputy vice-chancellor for research and internationalisation, said: "With this book, Dr Lyn Holness commits the democratic act of sharing her knowledge beyond the borders of her own university's research enterprise."

Visser describes the book as an impressive vade mecum for both young researchers starting a career in academia and their mentors.

"Only someone with both experience and empathy could provide such guidance," he says. "As one begins to read the book, it is immediately obvious that the author has both of these qualities in abundance."

Holness commented: "While this book does draw from the first (publication), it reaches beyond it to deal with the pressing issues within academia today. It seeks to be relevant, not only in South Africa, but across the sub-Saharan continent too."

"The challenge today, as it was when we began the ERP," says Holness, "is how to grow a new generation of researchers and do this in the context of transformation."

Growing the Next Generation of Researchers addresses three primary readerships.

It speaks first to institutions, and the imperative for institutional support in promoting research among junior staff members, sometimes requiring a shift in mind-set and a prioritising of resources in order to be competitive as higher education institutions on the national and global platform.

Second, it addresses those responsible for the task of mentoring new, young or inexperienced academics in developing their research capacity and igniting enthusiasm.

Third, it is directed at emerging researchers themselves, identifying the skills required to produce sustained, quality research, and discussing strategies to do so.