The late Dr Neville Alexander saw the Gariep (Orange River) as a fitting metaphor for a post-1994 South Africa grappling to unify competing identities into one nation. Its myriad tributaries, some powerful, some gentle, merge to become the river that gives life to the arid Kalahari and Namaqualand. As UCT prepares to rename the Graduate School of Humanities building after the scholar-activist, it's worth quoting this passage from Alexander's 'Language Politics in South Africa' in full.

"I have proposed the metaphor of the Gariep, that is, the Great River. This has numerous advantages in terms of describing the dynamic and the real variability or diversity of our society as it is structured at present. The image presents itself because of the historical fact that South African society, as we know it, has come about through the flowing together – mostly violently, sometimes in a relatively peaceful manner – of three main 'tributaries' – carrying different cultural traditions, practices, customs, beliefs, etc. These currents or streams are the African, the European and the Asian. Today, we have to add, as most countries in the world have to do, the modern American, or 'coca-cola', stream."

The Gariep is an indigenous image, he adds. It transverses the whole of South Africa and its tributaries have catchment areas across the country. The Gariep is also a dynamic metaphor, writes Alexander, which "gets us away from the sense of unchanging, eternal and god-given identities".

"For this reason," he continues, "it is appropriate for the transitional period in which we are living, any one tributary might flow more strongly than the others, that new streamlets and springs come into being and add their drops to this or that tributary, even as others dry up and disappear; above all, it represents the decisive notion that the mainstream is constituted by the confluence of all the tributaries ... that no single current dominates, that all the tributaries in their ever-changing forms continue to exist as such, even as they continue to constitute and reconstitute the mainstream."

Alexander called metaphors "powerful instruments of mobilisation and conscientisation". Indeed, his life's work can itself be read as a metaphor for these things.

When UCT's Faculty of Humanities unveils the Neville Alexander building on 28 August, one day after the anniversary of his 2012 passing, it's in memory of a man who "meant many specific things to many different people", according to a tribute penned by Crain Soudien and eight others in 2012.

Born to a carpenter and a school teacher in Cradock in 1936, Alexander was formally schooled at the Holy Rosary Convent. He completed a BA and MA at UCT in only five years before earning a PhD at the acclaimed University of Tübingen in Germany in 1961.

The Sharpeville massacre in 1960 heralded an immediate return to South Africa after his doctorate. He formed the Yu Chi Chan Club, which evolved partly out of a relationship to Marxism that he retained and refined throughout his life.

The early '60s were wracked by mass imprisonments of apartheid's opponents, violent security police, forced removals of black people from their homes, and tens of millions of black South Africans were barred from cities unless they were coming to work and carried a 'dompas'. It was in this stifling environment that Alexander came to support armed struggle – indeed, Yu Chi Chan means 'guerilla warfare' in Mandarin. 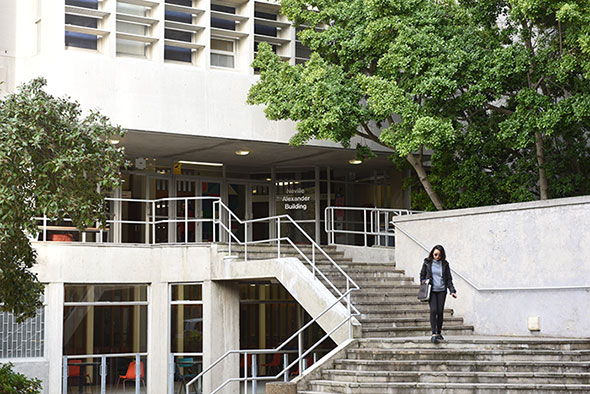 The new signage is already on display.

"What separated Alexander from many other academics and intellectuals is that his pursuit of knowledge was anchored in the existential imperative to act in the 'here and now'," Soudien et al write.

As Salim Vally, Jane Duncan and Brian Ramadiro wrote in 2012: "His whole life he argued for and practised a principled approach to building an independent anti-capitalist left while emphasising the need for the unity of all organisations committed to a socialist future."

Alexander was arrested in 1963 and 12 months later was banished to Robben Island for a decade. His time on the island produced the Robben Island Prison Dossier, a blow-by-blow account of the political prisoners' brutal treatment by the apartheid regime.

By the time he established the Project for the Study of Alternative Education in South Africa (PRAESA) at UCT in 1992, Alexander had published the seminal One Azania, One Nation under the pseudonym No Sizwe.

He insisted that post-apartheid education, and indeed the economy as a whole, suffered for the marginalisation of indigenous languages. Arguing that the legacy of apartheid education maintained the skewed status quo, he lamented mother-tongue education was still equated with the "ravages of Bantu education".

He writes in Language, Class and Power in Post-Apartheid South Africa: "Without analysing the matter any further, I want to maintain without fear of contradiction that this tendency, even though there are currently the beginnings of some hesitant countervailing tendencies, will continue to undermine South Africa's ability to expand and consolidate democracy and at the same time represents a built-in constraint on economic development, the magnitude of which remains to be established by means of carefully designed research in all branches of the economy."

His opposition to including 'race' in UCT's admissions requirements (at the time) demonstrated his belief that race was a concept devoid of any biological integrity, and merely a social construction designed to empower some over the disenfranchisement of others.

While he made a name for himself in the upper echelons of political debate – even competing in the 1994 general elections with the Trotskyist Workers List party – Alexander did much of his work outside the confines of academic halls, and through reading clubs, seminars and workshops around the country.

In Memory Book for Neville, which PRAESA compiled to commemorate his retirement in 2011, Carole Bloch, now the project's director, remembers: "Neville, you have been and remain a precious friend, you gave me space to grow and to help others to grow ... this has been a real gift."

In the same volume, which was presented to Alexander as a gift, Tumi writes: "I started my own reading club because of your encouragement. I have a lot of children attending the reading club at my house. We thank you for the freedom of reading and writing."

By naming the Graduate School of Humanities building the Neville Alexander building, UCT recognises the immense contribution that he has made as a scholar, activist, and public intellectual.

In a recent op-ed, UCT's Associate Professor Shamil Jeppie explained the decision to rename the building after Alexander.

"The decision to rename the building was taken in 2014 and is a fitting memorial by the university to this great alumnus. His intellectual focus on the role of language in the creation of a new society was a deeply humanistic endeavour," writes Jeppie. "A scholarly space in his honour also holds the hope that the intellectual life of the building will continue his legacy of intellectual curiosity and critique, of anti-racism and social justice."

His writings are freely available online.