How to turn apartheid urban planning on its head

In his keynote address at the REDI3x3 Policy Workshop on Spatial Inequality, held recently at the Centre for African Studies, Professor Edgar Pieterse criticised the current proliferation of urban policy and planning as "tinkering at the periphery of a complex problem".

He was speaking to a room crowded with urban policymakers, public officials, private researchers and academics.

"At present our efforts to create a more equitable urban fabric have resulted in a sustained anomaly in which social fragmentation, segregation and inequality are all worsening," he said.

"Since 1994, the state has provided over four million housing subsidies and built close to three million units. But despite this being one of the largest and most ambitious public housing programmes in the world, it has had a paradoxical effect. Public housing remains on the periphery and there is a strong continuity between apartheid-era housing and first- and second-generation social housing."

According to Pieterse, who holds the South African Research Chair in Urban Policy and is a founding director of the African Centre for Cities, such housing depreciates rapidly, burdening households with no or little income, while simultaneously further disconnecting the urban poor from economic opportunities.

In addition, citizen responses to such urban planning are often not well anticipated. As an example of the latter, he describes the case of Du Noon, a settlement near to Cape Town that was planned in 1995 to accommodate 2 900 households and which is now home to more than 16 000 dwellings.

Other deep-seated factors should also be taken into account, he says. For example, the fact that our urban infrastructure is based on 1950s modernist assumptions of engineering rationality is a profound problem in his view, because it creates a template for a resource intensive urban system, something which is particularly concerning when our energy systems remain dependent on coal.

Pieterse says that if you are an urban leader in one of our cities at present you are working under two overarching macro policy frameworks – the National Development Plan and the New Growth Path. However, the flagship national infrastructure investment programme that drives investment for the next 20-30 years is not aligned to these and with myriad agencies and departments often working in isolation of one another.

"No one can accuse South Africans of not trying," he explains, "We spend an inordinate amount of time debating, thinking, researching and creating plans, policies and reports. What I see more and more, however, is policies and programmes that amount to little more than tinkering at the edges of this complex problem, rather than any attempt to deal with the central question of the dislocation between the township and the suburb." 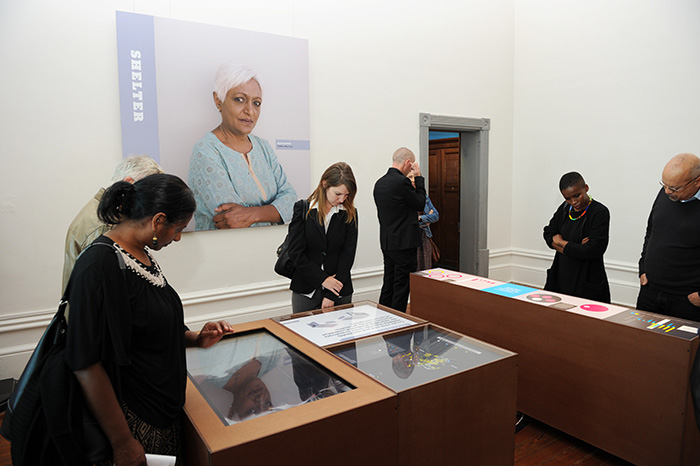 The City Desired exhibition focused on 10 relevant themes, by telling stories around the lives of 11 individuals, through commissioned non-fiction narratives that were then combined with key sets of data and maps. The exhibition can be seen online at www.citydesired.com

The majority city and the elite city

How does this current situation play out in the local context of Cape Town?

He describes Cape Town as one of the most compliant metros in the country. "Cape Town municipality has a strong indigents' policy and top-up investments through cross-subsidisation, it is aggressively following bus rapid transport (BRT) rollout and it has really interesting social economic analysis that goes a long way to better understanding the consequences of policy and public and private investments. In all there is a very deep understanding and desire to create change."

In his opinion, what this plan amounts to is that for the majority city (the townships) is: basic service delivery, increased housing delivery and rollout of the BRT, while for the elite city (the suburbs) the plan is to ensure there is no drop in the standards of municipal delivery while creating the most enabling environment possible for new real estate investment.

He has two problems with this approach: "Firstly, at the heart of the transport-orientated development (TOD) approach lies the fact that it boils down to a 20-30 year agenda for a real estate driven process of urban transformation."

"Secondly, I believe we must confront the question of whether, even with all the right policy, it is possible that we are still making no impact on the current challenges facing our cities. I think that is the case. We have a serious case of technocratic denialism; we plan without gees. We think we can figure this out behind our laptops and GIS maps, but that is no way to truly identify the problems and solutions that face our society."

Reimagining the township as the city

If this is true, how can we truly effect social integration, economic inclusion and sustainability? Or, in Pieterse's words: "What will it take to create, in hip-hop parlance, a critical black mass? Could it be that the central point is one of transforming our collective public culture?"

To achieve such an outcome, he suggests such varied ideas as criminalising NIMBY-ism ("not in my back yard"), ensuring 20-25% social housing minimums as a requirement for all real estate developments over R10million and tackling cultural transformation at private and model C schools through a minimum quota of reserved places for learners from the townships and the compulsory study of isiXhosa.

"And," he says, "if we really are going to take a transit-oriented approach, I believe we must put it on steroids, because at the moment the projections are far too modest to make any sizable difference to real estate markets and the economy."

His suggestions for accelerating the TOD approach is to fast-track rail investment, integrate and expand mini bus taxi systems and prioritise non-motorised transport.

Lastly, Pieterse asks how it might be possible to reimagine the township as the real city.

"Townships are inwardly focused sites of accumulative disadvantage where young people have little chance of getting a decent job that requires a university education. How can we halt the intergenerational structural exclusions this spatial system creates?"

His answer? Combine technocratic proficiency with trusting civil society to take the lead through unleashing the gees and capability of citizens (even if it feels politically dangerous and risky), focus on youth unemployment and the making of "place" and community as the city's "shared obsession".

"Instead of reimagining Cape Town," he says, "perhaps we need to re-imagine what we mean by place making."