The Women in Science Awards (WISA) 2015 were founded by the Department of Science and Technology in 2003 as an intervention to reward and recognise women in the sciences.

WISA 2015 chose the theme 'Science for a sustainable future'. The theme is based on the Millennium Development Goals (MDG), which had a deadline of 2015, and are now superseded by the Sustainable Development Goals (SDG). These goals set out a number of objectives, including addressing extreme poverty and ensuring basic human rights in health, education, shelter and security.

The ceremony on Thursday night did not shy away from the progress that still has to be made in achieving the ambitions of both these initiatives. However, the finalists and winners were all powerful testaments to how much has been done.

In addressing the impacts of climate change and infectious diseases, the young scientists, who represented UCT at WISA 2015, are tackling issues that disproportionately affect Africa; progress in these areas would certainly lead to a more sustainable future.

"We are immensely proud of our WISA 2015 scientists," said Professor Danie Visser, deputy vice-chancellor for research and internationalisation. "I am particularly proud of the important nature of their work and the way in which they are contributing to solving some of the most crucial challenges facing our continent.

"In order to make significant scientific progress, we need to draw scientists from the full diversity of our population. Young women such as these give us great cause for optimism about the future."

To the finalists and winners, Minister of Science and Technology Naledi Pandor made a rousing call: "Promote science. Promote young women's interest in science. Help us to bridge that gender gap that continues to be a blight on our society. Let us ensure that no woman feels that she is left behind in science and technology."

Dr Gina Ziervogel's research has always been focused on those most exposed and vulnerable to climate change and variability, from households to villages and at municipal levels. As the potential of climate change to compound and aggravate poverty becomes increasingly clear, her work has a crucial role to play in finding ways to respond to the impact of climate change, particularly in the context of African poverty alleviation and development.

"Almost by default, Gina's work has social impact," said Professor Mark New, pro vice-chancellor and director of the African Climate and Development Initiative (ACDI), who nominated her for the award. "Her research projects are generally done 'with' rather than 'on' people and communities, focused on practical issues."

This is evident in one of her current projects, called 'Flow': Fostering Local Wellbeing, a transdisciplinary research project led by the ACDI. The project supports a group of Flow Ambassadors – unemployed youth who play an awareness-raising role in adapting to climate change, mapping local resources and making videos of municipal services, local businesses and other stories to engender interest in the richness of their local towns.

Alongside this is the development of a community currency – a regionally based money initiative that supplements the national currency system, matching unmet local needs with unused local resources.

Ziervogel commented: "To me this is a really exciting project because it brings together the local community, the informal economy and the local municipality, to look at how they are developing and supporting adaptation to climate change."

In the next five years, she sees herself developing her engaged scholarship by working collaboratively with these different groups to find innovative solutions.

"One of the things we need to do in addressing the goals of environmental sustainability and reducing poverty and inequality is looking at transformation. What are new ways we can do things? What are new ways we can challenge the status quo and the current policies and ways that we work so we can be more collaborative and inclusive and address risks more holistically?"

She was an exceptional scientist, said Professor Susan Parnell, producing world-leading high-impact research with African as well as South African reach, as evidenced by her P rating from the NRF.

"Specifically, her work lies at the core of the global development agenda and brings science to bear on issues of eradicating extreme hunger, ensuring environmental sustainability and developing a global partnership for development. Ziervogel has carved a position as a strong leader in an important and growing field.

"The applied nature of her work means she has a powerful public profile. Policy makers and practitioners know her globally as a careful and systematic researcher who is making a major contribution to our understanding of how climate science is used. Given this year's theme of 'science for a sustainable future', I cannot think of anyone better deserving of this award." 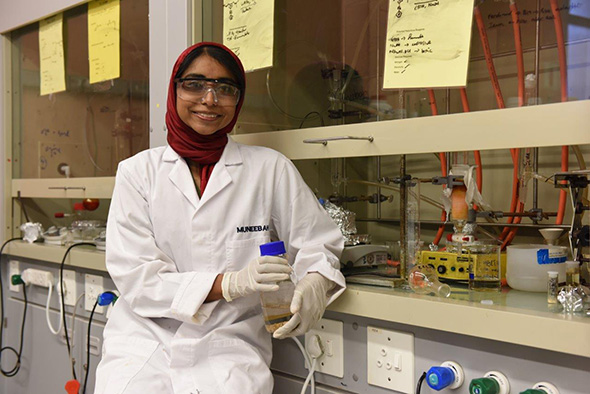 Parasite resistance to current treatments is growing, and a serious threat in Africa, with its high prevalence of infectious diseases. PhD student Muneebah Adams' projects are aimed at finding novel strategies to combat endemic diseases such as malaria, particularly resistant strains.

Adams is working on the preparation and evaluation of organometallic complexes such as potential antiplasmodial agents (which target the malaria parasite) and antitrichomonal agents (which target trichomoniasis, a common sexually transmitted disease). Her work will contribute to the growing library of compounds being evaluated for their biological activity, which will provide insight for future drug design.

"She is certainly ranked in the top 5% of research students I have supervised," said Professor Gregory Smith, who supervised her master's degree and in whose research group she currently works. "Her future could be predicted as an emerging top-notch researcher after she completed her MSc and progressed to the PhD degree. She immediately impressed me with her sense of purpose and work ethic."

Adams attributes her interest in science to the encouragement of her parents. "They have always been my inspiration and they instilled the concept that good hard work pays off," she said. 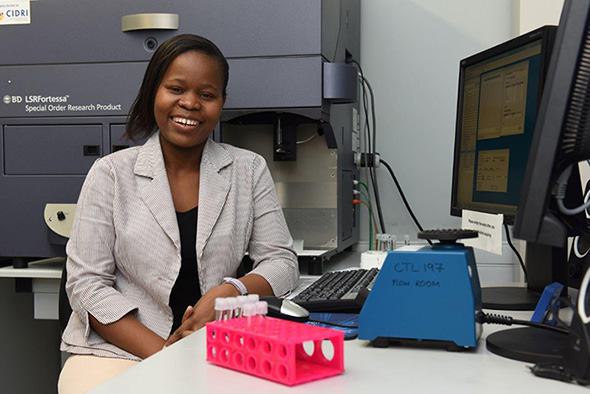 Central nervous system tuberculosis (CNS-TB) is the deadliest form of TB, with mortality rates as high as one in two. However, we do not yet understand the host immune mechanisms needed to protect against it. We therefore urgently need researchers to generate new knowledge and increase the depth of scientific insight into this area.

PhD student Khanyisile Kgoadi is one such researcher, and is currently investigating mechanisms associated with dendritic cell-T cell interaction during (CNS-TB). CNS-TB is an inflammation disease and many cell types play an important role in the immune defense responsible for clearing of the inflammation. Dendritic cells seem to be potential key players in understanding the mechanisms that occur in CNS-TB because of their characteristics and ability to initiate innate immunity, activate and alter T-cell responses in clearing the inflammation.

Before embarking on her PhD, Kgoadi had already made her mark during her honours and master's degrees, where she studied under a renowned leader in the field of HIV/AIDS, Professor Debra Meyer, at the University of Pretoria. Here she was one of a few researchers in the world addressing HIV/AIDS and highly active antiretroviral therapy (HAART) using novel-based metabolic approaches.

Dr Aurelia Williams, postdoctoral fellow at the University of California, San Francisco, who was her mentor and honours co-supervisor and who nominated her for the award, said she was impressed by her dedication to "making a change in the lives of people infected and affected by poverty-related diseases".

Said Kgoadi: "I chose to go into this field because I could not bear the heartache and despair I feel when I see and hear of people who are suffering from HIV/AIDS. Science offered me an opportunity to make a difference, so I took it."

She moved into the field of TB research because of the high rates of co-infection. "To tackle both of these infections, which are still so high in South Africa and Africa, I need to research both," she said.

Her current supervisor, Associate Professor Muazzam Jacobs, predicts a stellar trajectory for her. "I have had many postgraduate students passing through my hands; Khanyisile Kgoadi is among those I expect, and will accept nothing less than, performing at a scientific level equal to the best."

She has already notched up a first-author publication and won several competitive awards; at the same time, she has engaged in a number of community outreach initiatives.