Violence against women must emerge from the shadows

Journalists need a resource guide focused on "issues of gender, patriarchy and misogyny" if they are to report accurately and fairly on cases of intimate partner violence.

This is one of Dr Taryn van Niekerk's recommendations following her study into intimate partner violence and how it is understood by perpetrators and their communities, as well as how it is represented in the media.

South Africa has the dubious distinction of being a country with one of the world's highest rates of gender-based violence. Furthermore, an analysis of the South African Stress and Health survey found that domestic violence was the most common form of violence experienced by women.

Van Niekerk, a recent PhD graduate and researcher at UCT's Children's Institute, also suggests that journalists receive training that sensitises them to the implications of the language and writing traditions they employ when reporting on violence against women.

As part of her study, Van Niekerk analysed the content of two Cape Town dailies, the Cape Argus and the Daily Voice, and their representations of intimate partner violence.

Through this analysis she found that, in the name of newsworthiness, extreme forms of violence against women (such as sexual violence) were prioritised above more insidious forms such as emotional or psychological abuse, which keep women silent and trapped in abusive relationships.

"It has the effect of privatising the violence, rather than making these issues part of public discourse ... (A) resource may also draw journalists' attention to problems surrounding newsworthiness, and this tendency to prioritise one form of violence over another."

She describes her study as "an in-depth analysis of language" in which she aims to "unearth issues of power and oppression" that emerge when people speak.

Her data was drawn from three sources: Interviews with perpetrators of intimate partner violence, focus groups with their peers and relatives, and media analysis. Study subjects were sampled from two marginalised communities in the greater Cape Town area – Hanover Park and Strand. She conducted a simultaneous analysis of data from all three sources; and this, together with the theories she adopted, resulted in a unique methodology for her study. 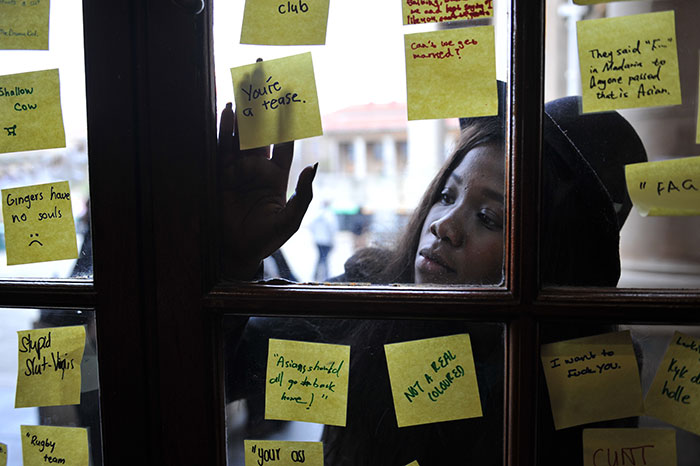 As part of a 2014 collaboration between Michaelis School of Fine Art and university's HIV/AIDS, Inclusivity and Change Unit (HAICU), first-year students staged an exhibition looking at social justice issues, many of them to do with gender. One group in particular asked members of the UCT community to write down their reactions to inappropriate or disrespectful comments (as well as the comments themselves) on sticky notes, and the notes were pasted on the windows of the Molly Blackburn Hall (seen here).

Blaming the victim is a common thread

A recurring message she uncovered among the perpetrators, their social networks and the local media revolved around victim-blaming – where female victims were often blamed for the violence they suffered.

"Graphic descriptions of the bodies of murdered women were presented in the Daily Voice, and often these women were depicted as rebellious, sexually impure, corrupt individuals – as if this information justified the brutalities against them. What's more, it was predominantly black female bodies marked in these discourses of the 'deviant' victim. However, women who abided by traditional feminine values were less likely to be blamed for the violence perpetrated against them. Instead, they were considered worthy, 'valid' victims. More focus was placed upon the responsibility of the victim in the violence than on explaining the broader practices at work that made this violence possible."

Violence as a social act

Van Niekerk maintains that intimate partner violence cannot be isolated from its social context. "We think of intimate partner violence as an act only committed by the perpetrator against the victim. However, this act of violence might have been influenced by a number of conditions, such as the extent to which violence is tolerated in a community, and the social and cultural norms that possibly condone or reject it. Some research has found that men's family members choose either to remain oblivious to or defend their violent acts." When referring to the social or collective component to intimate partner violence, she emphasises the covert role played by men's social circles and the greater community, and the fact that perpetrators are more likely to continue their abusive behaviours if the community condones such behaviour.

"The primary finding of my thesis is that men's representations of intimate partner violence were deeply influenced by an 'audience' of peers, kin and community members, and their ideas of what a man and woman ought to be and do. Indeed, it can be said that intimate partner violence is an act that is influenced by surrounding social and cultural norms that at times condone this violence. The community, relationships and individuals are shown to be inseparable spheres."

Van Niekerk argues for the development of prevention and early intervention programmes directed at "tackling problematic masculinity practices, which involve control over women and children, as well as social norms that render woman and girls compliant and vulnerable to men". She believes parents should be the targets of such programmes to help them "rethink patriarchal practices that might produce violent masculinities".

Furthermore, therapeutic interventions can also aid in the recovery of survivors of intergenerational abuse – where children encounter or witness abuse.

"My findings point to the prevalence of intergenerational abuse – of men and women who witness or experience violence in their childhood, and become perpetrators and victims of violence in adulthood ... Therapeutic interventions that attend to the psychosocial and emotional needs of children – and their families – are important, and might have great meaning for reducing the long-term effects of such abuse."