How to study the most dangerous animals in Africa

Jess Dawson is studying the impact of hippo poo on the St Lucia food web; among other skills, she's had to learn how to catch a crocodile, and how not to unsettle a hippopotamus.

Hippos may spend their days wallowing in the water (to avoid sunburn), but at night they come onshore to eat. Dinner for the average hippopotamus ranges between 30 and 40 kilograms of grass. This means that each hippo deposits up to 25 kilograms of dung into its surroundings a day.

"Hippos are transferring a huge amount of nutrients from the terrestrial to the estuarine environment," says Jess Dawson, PhD student in the Department of Biological Sciences. The St Lucia estuary, where Dawson's research is based, contains around 1 000 hippos; this means up to 25 tonnes of hippo dung deposited into the ecosystem daily.

South Africa boasts about 250 estuaries. Historically, around 200 of those used to be home to hippopotamus populations; today, the St Lucia estuary in northern KwaZulu-Natal (KZN) is the only estuary that contains a settled, sustained and protected population. This, says Dawson, offers a valuable opportunity to understand the impact of hippos on an ecosystem – and more specifically, the impact of hippo dung on the St Lucia food web. 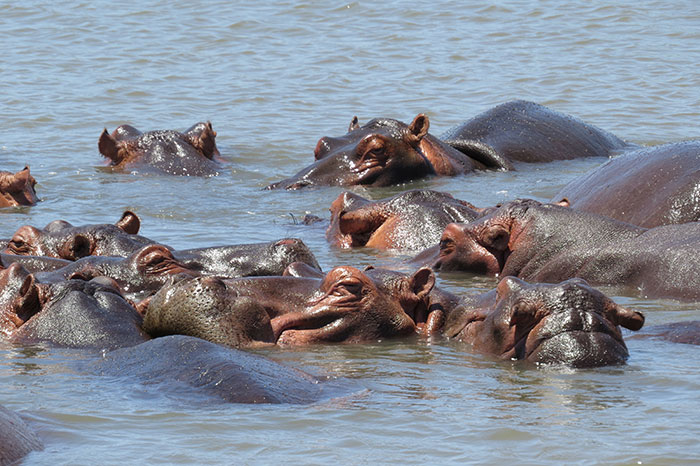 Hippos in the St Lucia estuary.

Having grown up visiting game reserves and enjoying days and nights out in the bush, Dawson was well aware of the dangers of doing research in a system containing two of South Africa's most dangerous animals: hippos and crocodiles. "Even though my mother wasn't super-keen on the idea – it still makes her nervous – I accepted the dangers and necessary precautions I would need to take, because it was such an interesting and poorly studied topic," she says.

Dawson uses two techniques called 'fatty acids' and 'stable isotope analysis' to determine the effects of hippo dung on the food web. Fatty acids are used to trace the transfer of organic matter (dung, in this case) through the food web, to see how far up the food chain the dung is present. Stable isotopes can be used to get a 'signature' from the dung and grasses, and then track that signature through the St Lucia food web. This helps to determine what proportion of a species' diet is made up of hippo dung, and how far up the food chain the dung travels. The food web samples collected include sediment organic matter, particulate organic matter, small organisms such as microalgae and zooplankton, larger species such as macrofauna (invertebrates living on or under the sediment surface), fish, and even a few crocodiles.

When sampling in this kind of environment, says Dawson, caution is her watchword.

"Hippos are dangerous on land and in water," she explains. "Although they have to come on to land to feed, they don't feel safe out there. So if you happen to get between a hippo and the water, you're in trouble. They will probably charge for the water; and because of their size, they can easily kill a person just by running over them."

And in the water, they are very territorial. So, she says, the research teams stick to a few key rules when out on the boat. They try not to go within 50 metres of a hippo; and if a hippo starts to look even slightly agitated, the researchers weigh anchor and move on.

"The real concern," says Dawson, "is that hippos can move surprisingly stealthily. A researcher can unwittingly come between a hippo mother and her young while walking about on the hippo paths; and that's a very dangerous place to be." Dawson has no choice but to walk on the hippo paths, as this is where the hippo dung is. Fortunately, she has managed to complete her sampling with no surprise hippo encounters.

Once Dawson has collected her dung samples, she deposits them into cages – four-walled structures, made of wooden poles surrounded by shade mesh – which enclose an area of 50cm°, from sediment bottom to water surface. The cages keep fish and other larger species out, but create uniform areas in which she can change the conditions and study the effects of those changes.

"Once a week, for six consecutive weeks, I put a measured amount of fresh hippo dung in half the cages, and no dung in the other half," says Dawson. "This allowed me to compare the effects of the dung on the system within each cage."

As if hippos – generally regarded as the most dangerous animals in Africa – are not enough, Dawson also has to contend with crocodiles. The two beasts don't compete for food, and hippos are too big to be feasible prey for crocodiles; so they can live in relative harmony, and are often found together.

But to put her dung into the cages, Dawson has to walk knee-deep into the water of the estuary. "The water's completely brown," she says. "When I started my research, the crocodile expert's advice to me – aside from recommending great caution, and constant vigilance – was: 'Don't go too deep, and carry a stick; if a crocodile comes, hit it on the head.'" Dawson says she has no idea if her reflexes would be fast enough for her to hit an attacking crocodile on the head; but she keeps her crocodile stick with her at all times. 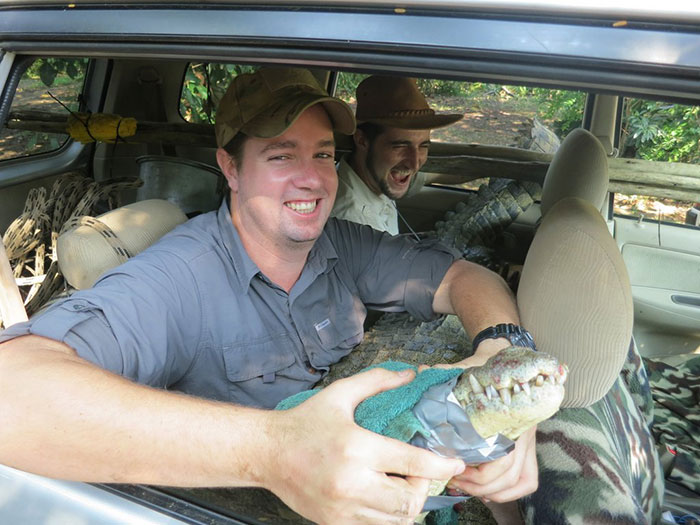 This croc was causing problems at a jetty used by tourists, which made it easy to catch for sampling. The researchers helped to relocate it to a dam further north, where it could no longer give trouble.

It's all very well avoiding crocodiles while collecting dung; for other parts of her research, Dawson has had to get up close and personal.

Since crocodiles also occupy the estuary, they are a part of the food web she is studying. This means catching them in order to sample their tissue. The crocodile-catching expeditions are overseen by crocodile expert Xander Combrink, employed by KZN Wildlife. He takes the researchers out on a boat at night, when the crocodiles are out in full force, and shines a light over the water to pick up the reflections in their eyes.

"Once you've identified a crocodile, you turn off the engine so you can cruise closer without startling it," Dawson explains. "Then you hold out a long pole with a noose on the end, and slip the noose over its head. Some nights you're lucky; other nights, you don't even get close."

Once the crocodile feels the noose tighten, it starts to roll and thrash; and this can be pretty startling, says Dawson. However, with the cautious approach the researchers use, they cannot actually be pulled into the water. Just in case, the end of the noose rope is securely attached to the boat so that if they do need to release the rope, the croc won't escape and be left with a noose around its neck. After a bit of a fight, the researcher slowly pulls the crocodile toward the boat.

"Once it's caught, you want to get its mouth closed up as quickly as possible," says Dawson. So the next step is to use a pole with a big cable tie on the end; a rope and fish hook through the end of the cable tie allow the researcher to close the tie from the safety of the boat.

With the crocodile's mouth held closed, they slowly pull it to the shore: "At this point you have to be very careful to keep the croc's head above water, so as not to drown it inadvertently," Dawson remarks.

On shore, the researchers cover the croc's eyes with a damp cloth, tie up the back legs (with very big crocs, they tie the front legs too) and put duct tape around the mouth to ensure it's securely closed.

"Once their eyes are covered they become quite docile, and stop fighting," says Dawson. Although, she says, to ensure the crocodiles don't make a run for the water or move too much, researchers occasionally have to sit on them too.

What's it like sitting on a crocodile? Dawson laughs. "Really, really uncomfortable!" 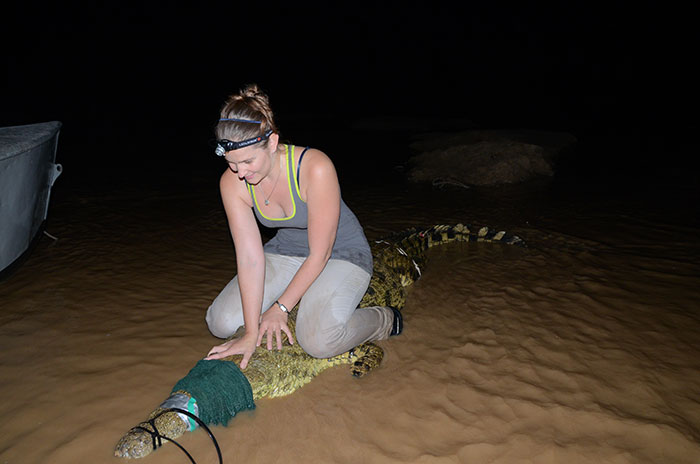 The crocodile's scales are hard, and have spike-like bumps, which doesn't make for a comfortable seat.

The researchers do the full analysis of the bound croc as quickly as they can. This includes measuring it, identifying the sex, and removing tail scales for tissue analysis. "During the croc-catching week, and for a while afterwards, I had terrible nightmares about crocodiles," she says. "I was very grateful that by this time I had completed my other sampling work, and no longer had to stand in the murky water."

While she may be chasing and catching crocodiles, the nature of Dawson's work means that other creatures find themselves quite attracted to her, too. "I used to handle the dung with my bare hands. It doesn't smell bad – after all, it's really only grass. But the smell does linger," she says.

"One evening I decided to go to the beach to watch the sunset, and noticed a dung beetle seemed to be hanging around. When I got to the beach and the beetle was still with me, I realised it was me the beetle was after!" Shortly after that, she began wearing gloves when working with dung.

Despite her close encounters with dung and dangerous animals, Dawson loves the work. "I really enjoy understanding how a system functions," she says. "My research may not mean I am developing policy for environmental management, but this baseline knowledge – this understanding of what is happening in a system and how it works – is crucial for a broader understanding of our environment. It may not have huge conservation impacts right off the bat, but it contributes to knowledge that could certainly impact conservation in time."