Fact and fiction in Jurassic World

'Nothing in Jurassic World is natural!' proclaims Henry Wu, the chief scientist in Colin Trevorrow's Jurassic World. And to complicate matters even further, he explains how even the DNA used to 'create' the animals is not authentic dinosaur DNA: gaps in the ancient genome have been filled with the DNA of different living animals. In a movie such as this, the public is often left wondering: what is fact, and what is fiction? Professor Anusuya Chinsamy-Turan, palaeontologist and head of biology at UCT, unravels some of this confusion.

The history of life on earth extends to about 3.8 billion years ago. Jurassic World showcases animals that existed in the Jurassic time period, which began about 208 million years ago (mya) and lasted for roughly 56 million years. However, in reality, some of the animals depicted in the movie are found only in the Cretaceous time period (between about 152 and 65 mya). Many animals (including non-avian dinosaurs) that thrived in the Jurassic and the Cretaceous periods died out in the catastrophic mass extinction event that rocked our planet about 65 mya. Most of what we know about these extinct animals comes from studies of their fossilised bones and teeth, and from the palaeo-environments in which their remains are found. Under rare fossilisation circumstances, impressions of soft tissues (such as organs, skin and feathers) of these long-gone animals are preserved. Studies of the fossilised remains have allowed us a glimpse into the lives of extinct animals, and have permitted reconstructions of various aspects of their biology.

In Jurassic World, Indominus rex is quite obviously reminiscent of the world's best-loved predatory dinosaur, Tyrannosaurus rex ... with some enhancements. Dr Wu explains that the T. rex DNA was genetically supplemented with DNA from other animals such as cuttlefish and tree frogs. These particular genetic additions make Indominus capable of moderating its body temperature, and camouflage. Its exceptional strategic abilities, including the plotting and scheming, are all clearly in the realm of fiction.

Unlike Indominus, T. rex was a real dinosaur. It lived in the Cretaceous and is well represented in the fossil record by a number of individuals, including juveniles and several adults. Research into the microscopic structure of T. rex bones shows that it took about 18 years for the dinosaur to grow to about 14 metres in (adult) size. 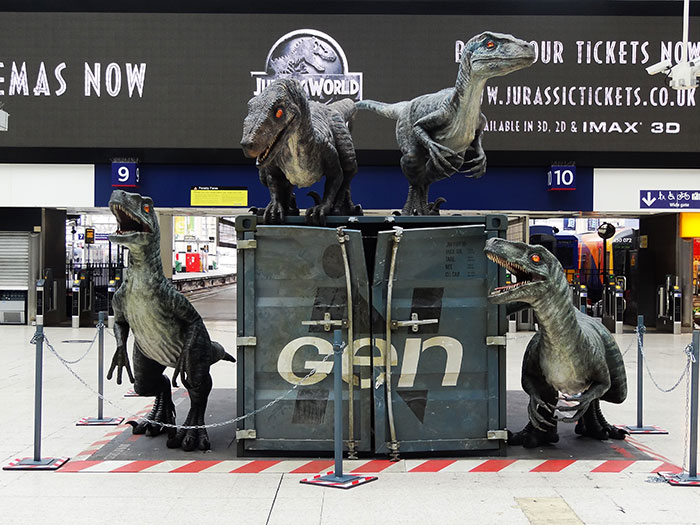 In the movie, the raptors are based on real dinosaurs called Velociraptors that were only about half the size of those depicted in the movie. The fossil evidence shows that 'raptors' were pack hunters, and although we know that Velociraptors were not dim-witted, exactly how they hunted and whether they could have been 'trained', as Chris Pratt attempts in the movie, is pure speculation.

We know that many large sauropods were herbivorous behemoths, and much scientific research has gone into reconstructing their posture and locomotory habits. It was fabulous to see the animated Apatosaurus move on the big screen as scientists theorise, which is a far cry from the tail-dragging dinosaurs of earlier movies.

My biggest disappointment in the movie was the lack of any feathered dinosaurs. For more than two decades we've known that although some dinosaurs had typical scaly reptilian skin, many of them also had feathers. The feathers of some dinosaurs are identical to those of modern birds (their descendants), while in others the feathers appear to be prototypes of feathers or of some sort of feather-like structures.

Besides the CGI dinosaurs, it was great to see the marine reptile (a mosasaur) leaping out of the water in Jurassic World. These gigantic carnivorous sea reptiles are not dinosaurs, and they only arrived on the scene in the Early Cretaceous. Some of the largest mosasaurs (like Mosasaurus hoffmanni) reached lengths of about 18m, but none are known to have reached the gigantic proportions of the movie's version! Though it is true that, with enormous vicious teeth along the side of their jaws, and some in the roof of its mouth, mosasaurs were the top aquatic predators of the time!

Jurassic World's flying terrors are also not dinosaurs. They are, however, based on real fossil creatures, called pterosaurs, that were the first flying vertebrates that took to the air on membranous wings. Pterosaurs were lightly-built animals (lighter than any comparably-sized bird), and they came in many different sizes. Some were sparrow-sized; whereas others, like Quetzalcoatlus, were enormous, with wingspans of about 10-12 m. Many pterosaurs show special adaptations for eating fish (piscivory) and insectivory, although there were a few filter-feeders. It is highly unlikely that these delicate-boned animals would have been able to lift an adult human off the ground (as in the movie)! I'm afraid the pterosaur attack is purely in the realm of fiction.

As in any good science fiction story, there are embedded elements of scientific fact in Jurassic World. (This was also true of Michael Crichton's Jurassic Park, which Steven Spielberg turned into a blockbuster more than 20 years ago.) Jurassic World stretches the evidence of what we know of earth's prehistory into a fantasy that has already entertained and delighted millions of people around the world.

I am a real palaeontologist, who studies dinosaurs; and although I think the story line of Jurassic World was terribly predictable, and that it could have portrayed more real science, I loved the CGI extinct animals. It is my earnest hope that despite the embellishments, Jurassic World – like the original Jurassic Park – will inspire a new generation of palaeontologists and dinosaur enthusiasts.

This opinion piece first appeared in the Daily Maverick. Image of Velociraptors at Waterloo station licensed under CC BY 2.0 via Wikimedia Commons.