Archaeologists working at the El Mirón cave in Cantabria, Spain, have found evidence that our Paleolithic predecessors, who lived between 10 000 and 15 000 years ago, ate fungi such as bolete mushrooms. Bolete mushrooms are widespread in Europe and the northern hemisphere.

The findings were published in a Journal of Archaeological Science (Vol 60) paper by PhD candidate Robert Power, a PhD candidate at the Plant Research Group, Max-Planck Institute for Evolutionary Anthropology, and his supervisor, Dr Domingo Salazar-Garcia of UCT's Department of Archaeology.

Salazar-Garcia and Power have been working on Iberian prehistoric material for several years. Dental calculus remains from El Mirón show that although these people were primarily hunters, they also ate a variety of plant foods – including mushrooms. Dental calculus is mineralised dental plaque made of minerals, bacteria and trapped micro food remains that archaeologists use for reconstructions of dietand the associated environment.

Examining the dental calculus using several microscopy techniques revealed diverse microremains from plants, fungi, animals and minerals. Compared to bones, plant foods (especially) leave little trace in the archaeological record. Even less is known about the early use of fungi.

"We're lucky that in the past, people didn't get rid of their dental calculus – otherwise we wouldn't be able to study them today!" says Salazar-Garcia.

What archaeologists know about human diet during the Magdalenian phase – the final phase of Western Europe's Upper Paleolithic period – is based on terrestrial animals, mainly medium and large herbivores, he says. "These hunter-gatherers relied heavily on reindeer in the north, and red deer, ibex, fish and other small game in the southern regions." 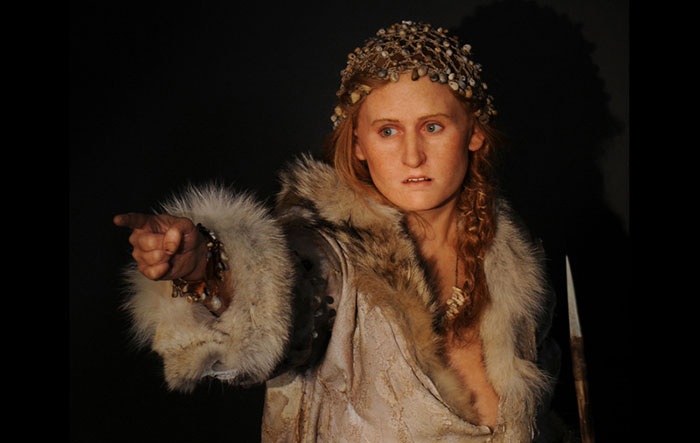 Archaeologists working at the El Mirón cave in Cantabria, Spain, have found evidence that our Paleolithic predecessors, who lived between 10 000 and 15 000 years ago, ate fungi such as bolete mushrooms.

Other uses for mushrooms

Power has always been interested in how traditional societies take advantage of wild resources such as plants and mushrooms for food. Although the use of mushrooms is poorly understood in prehistory, ethnographers have found that more recent hunter-gatherers not only ate fungi, but also used them for flavouring and medicine.

Mushroom use has been identified from as early as the European Chalcolithic period (roughly 5 300 to 1 700 BC). The Chacolithic Tyrolean Iceman 'Ötzi' (dated to between 5 300 and 5 100 years ago) carried several types of fungi with him. The finding at El Mirón cave is probably the earliest indication of human mushroom use or consumption, which had not previously been identified in the Palaeolithic period.

Salazar-Garcia's background is in both medicine and archaeology: "I've always been interested in what humans are and where we come from. And studying subsistence and diet in the past through microscopic and biomolecular analysis is an interesting way of combining my areas of interest," he said.

If the presence of mushrooms points to diversifying food choices, the Magdalenian period is also distinctive for its sophisticated tools.

"This period was important for developments in and increases in decorative and art forms. For example, bone tools were often decorated with engravings."

The most famous art of the period is cave engraving and polychrome painting. The Magdalenian people also had language, social order, symbolic thought, and most probably spiritual expressions too.

Cave is mine of information

The El Mirón cave, 20km from the coast of the northern Iberian peninsula, on the western face of Monte Pando, has been excavated since 1996. It's been a gold mine for archaeologists, revealing rich details of life in western Europe in the Magdalenian period.

The remains of the famous Red Lady (daubed with red ochre that sparkled with spectacular heamatite, a type of iron oxide), were recovered from a burial chamber at the back of the cave. These provide interesting glimpses of the times. The ritual of using red ochre at burials throughout the Upper Palaeolithic and elsewhere in Europe suggests it was important in burial rites.

Salazar-Garcia and Power have published previously in international journals, both as lead authors and as co-authors. Most of their papers have dealt with prehistoric dietary reconstructions using stable isotopes and the study of plant microremains.