Emeritus Associate Professor Brian Paddon passed away on 20 June 2015 having been an academic in the Department of Chemical Engineering from 1969 until his retirement in 1994. Brian was born in Calcutta, India, in 1932 and spent his early childhood in Amritsar and attended school in Darjeeling. During WW II he and his sister were sent to back to South Africa and Brian matriculated at St Andrews College in Grahamstown in 1950. 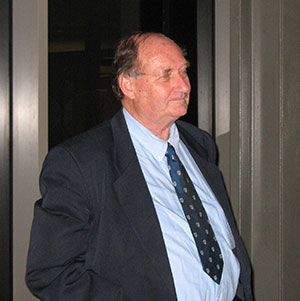 He went on to UCT where he graduated with a degree in Applied and Industrial Chemistry (shortly thereafter to become Chemical Engineering). His first job was at Mobil refinery in Durban where he was involved in the early development of Mobil's first fluidized catalytic cracking unit. He returned to Cape Town in 1963 continuing to work with Mobil and during that time completed his MBA as one of the first graduates from UCT's Graduate School of Business. In 1969 Brian left the corporate world for a position in the Department of Chemical Engineering at UCT joining other luminaries from the early days of Chemical Engineering such as the late Donald Carr and Heinrich Buhr.

The Department in those days was quite small with only a handful of lecturers and graduating classes of between 10-20. However Brian and his colleagues created a wonderful foundation for what is today widely regarded as one of the leading Departments of Chemical Engineering globally. The Department benefited greatly from having someone on its lecturing staff with such extensive industrial experience and Brian became renowned as the convener of the tough Design Course which is the capping course to the Chemical Engineering degree. His knowledge of chemical engineering processes was legendary and through this he made an enormously positive impact on generations of chemical engineering students.

Brian Paddon, ever cheerful and pleasant to all and sundry, was passionate about his teaching and will be fondly remembered by colleagues not only in Chemical Engineering but also in all the Engineering Departments at UCT. Staff and students will recall how wonderfully helpful he was at all times to students struggling with the basics of chemical engineering and to new young academics still finding their feet. The University and Chemical Engineering in particular are deeply indebted to Brian for his dedicated and passionate contributions to the Department over almost three decades and he will long be remembered by all those with whom he came into contact.