What can be done to make sure that wind energy and Africa's vultures co-exist?

Many people see wind energy as one of the key solutions to meeting Africa's growing energy demand and mitigating climate change. As a result, wind farms are already under construction or are being planned in many countries across sub-Saharan Africa. But wind farms can pose real threats to bird species, and they have the potential to jeopardise threatened bird populations.

So far, the biggest impact of inappropriately sited wind turbines has been on populations of large birds of prey, in particular eagles and vultures. In some extreme cases turbines have led to the death of hundreds of the birds as they collide with the turning blades.

Wind energy has the advantage of being an established energy source. But we also know from experiences in Europe and the US that inappropriately sited wind farms can have a devastating impact on the environment.

For example, hundreds of raptors are killed each year, including relatively large numbers of Golden Eagles at the wind farm at Altamont Pass, California. Turbines at the Smola Island wind farm in Norway have also had a terrible effect on White-tailed Eagles.

Africa has the opportunity to benefit from lessons learned in Europe and North America. Experiences there can help ensure that wind farms are not placed in areas likely to conflict with vulnerable bird populations. They can also advance our knowledge on how wind farms can be constructed in a sustainable way without destroying the very species they hope to ultimately protect from the negative impacts of climate change.

Lesotho is a prime site

Lesotho is the only independent state to lie entirely above 1000m elevation and is one of the poorest countries on the planet. It is a prime location for wind energy production which has the added advantage of bringing in much needed revenue and creating jobs.

But the Lesotho mountains also lie at the centre of the Bearded Vulture population in southern Africa, a species particularly vulnerable to the impact of wind farms.

Bearded vultures are classified within this region as critically endangered. They have declined by at least 30% over the last few decades. Only around 100 pairs remain. The main causes of the decline are linked to poisoning and collisions with power lines.

Lesotho currently has no wind farms but large scale developments are being planned in the Letseng and Oxbow areas. The Letseng project, consisting of 42 turbines, has already been approved. There are also longer-term plans for multiple wind farms made up of 4000 turbines generating around 6000 megawatts throughout the Lesotho highlands. 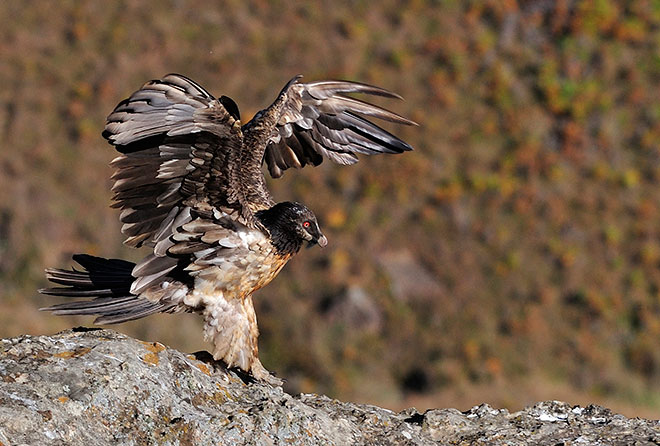 This can be achieved in two ways.

The first is ensuring that wind farms are not developed in areas where vulnerable species occur. This can be done by building sensitivity maps that highlight the best and worst locations at a very broad scale of where to place wind farms within a country. A map like this has been successfully completed for South Africa by BirdLife South Africa and the Endangered Wildlife Trust.

The second approach aims to ensure that, where wind farms and vulnerable species do overlap, turbines are sited in the most appropriate locations to decrease the risk of collision. This approach is difficult because it requires detailed information on the habitat use of species which is only rarely available.

But this kind of data would make it possible to build predictive models which could be applied across a species' range to identify inappropriate locations for turbines.

In our new study, we applied this second approach to identify high use areas for the Bearded Vulture in Lesotho and neighbouring provinces in South Africa. Our aim was to provide a tool that would allow developers to site wind farms in locations least damaging to Bearded Vultures.

We took advantage of tracking data collected from 21 Bearded Vultures fitted with solar-powered GPS satellite tags. Between 2007 and 2012 these tags generated the equivalent of 31 bird-years of data logging the vultures' location, altitude and speed every hour during daylight.

Working with a spatial ecologist, we used the data to construct models that predicted which areas would be most intensively used by Bearded Vulture. Separate models were built for territorial adults and sub-adults because they behave differently.

Next we refined these models incorporating the probability of flying at heights that place the birds at risk of collision. This is less than 200m. Our final model combined probability of being at risk height and allowed the generation of a risk map covering the entire southern Africa range of the species.

We tested the use of the map with the two proposed wind farms and explored their levels of risk relative to other sites within the species range. We found that the two proposed wind farms were very poorly sited, particularly the one at Letseng. This reinforced the findings of another study which suggested that fatalities from the wind farm could substantially increase the decline rate of this species.

The map is freely available to wind farm developers and can be used to guide future development. Based on the information it provides we hope wind farms will be sited away from high intensity areas used by Bearded Vultures. The map's high resolution (90m x 90m) also means it can help guide the placement of individual turbines.

The model was built to test the feasibility of creating such a tool. We are now confident that this can be a useful approach to help other species threatened by wind farms.

Disclosure statement: Arjun Amar received funding from DST-NRF Centre of Excellence at the Percy FitzPatrick Institute of African Ornithology, and from Natural Research Ltd, a Scottish based environmental charity.