What lies behind the rise of jihadist movements in Africa

Africa arguably faces the biggest threat to political stability since the collapse of colonialism in the mid-20th century.

The threat comes in the main from the proliferation of militant Islamic groups in parts of the continent.

These groups, which strike at the heart of African cohesion and nation-building, include:

Journalists, analysts and scholars provide crucial insights into the identity and practices of Africa's rebel groups. But credible information is invariably a casualty of war. This requires people to exercise a high level of critical analysis to attain an unbiased understanding of conflict in Africa.

The consequences of the support by the West for oppressive African regimes needs to be considered. In turn, strident Muslim aggression needs to be understood in relation to the influence of Western-based Christian fundamentalist groups in Africa. Many devout Muslim believers see this as a muted form of the Christian crusades that endured for 200 years.

Some 800 years later, the current conflict is understood as a continuing fight for the purity of an Islamic belief. For them, defeat is not an option.

Drivers of the jihadist conflict

The Sykes-Picot agreement, which entrenched European dominance in the Arabian Peninsula in the wake of the first world war, plus the West's protection of the newly established state of Israel in 1948, resulted in a resurgence of Islamic extremism in global politics.

The effects of the Cold War escalated, and the African independence struggles resulted in a plethora of African coup d'etats, counter-coups and deep-seated tensions in the 1950s and 1960s. This ideological conflict soon mutated into resource wars and economic deprivation, manipulated by religion and culture, still today.

African notions of state have their roots in colonial law, which resulted in political control by a dominant group. This "crime", says world-renowned Ugandan scholar Mahmood Mamdani, led to the politicisation of culture, religion and indigeneity to the exclusion of subservient and minority groups.

The failure of African states to adequately address their racial, ethnic, cultural, religious and economic differences provided the fertile ground on which rebel groups now prosper.

The gap between the basic principles of democracy and political participation, and their non-implementation, has contributed to the stand-off between government and individual ethnic, cultural and religious groups. 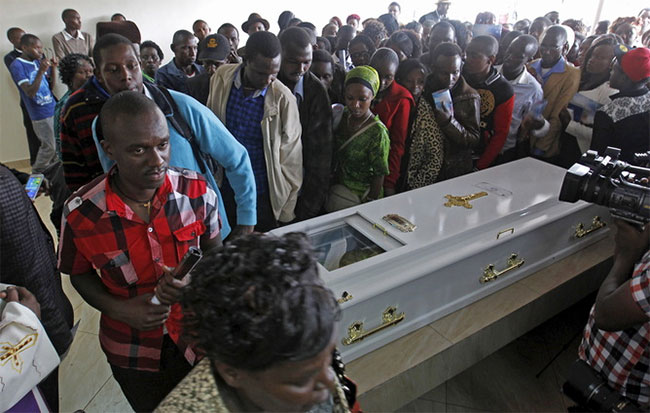 Relatives and friends gather to view the body of a student killed during a recent al-Shabaab attack in Kenya. (Photo by Thomas Mukoya/Reuters.)

Capitalism, deeply entrenched in the global economy, has produced dependent African economies. Only a minority of grassroots Africans have been drawn into the middle and upper classes which, in the words of South African political analyst Steven Friedman, constitute an exclusive club "never meant to be for everyone".

In the absence of compromise between the two ends of this economic divide, the fabric of African co-existence is under serious threat. This contributes significantly to the fight-back by Africa's poor, which includes a growing number of alienated and unemployed young people.

Toxic mix of religion and poverty

African poverty acts in a symbiotic relationship with religion, which is a powerful mobilising force among poor communities.

Priests, mullahs, rabbis and other religious leaders are frequently associated with extremist views which they communicate through religious language and symbols that acquire apocalyptic dimensions involving a choice between divine wrath and favour. They demand dogmatic obedience by their followers, while promising rewards in heaven.

At the same time, there are inspirational religious leaders and grassroots believers in Islam and Christianity who affirm the supremacy of God and Allah over state and rebel leaders.

But their focus on the pre-eminence of the divine is largely suppressed as institutional religion is captured by the dogma of ruling and rebel groups. This lifts the political conflict into the realm of spiritual encounters between rebels and the state.

Driven by different forms of propaganda, this dogma promotes and legitimates violent behaviour. Believers engage in civilian massacres, kidnapping and abduction, rape of women and girls, forced marriages and the killing of so-called infidels and apostates. The slaughter of rebels by government forces also occurs under this rubric.

Dehumanisation of the other

The extent of this violence, driven by a sense of exclusivity, moral superiority, religious intensity and blind submission to authority has resulted in the endemic demonisation and dehumanisation of "the other".

There are no quick answers to the toxic mix of the above five ingredients. Understanding and unravelling the intertwined causes will require critical elements that need to be creatively reviewed by African leaders, credible facilitators and a pool of multi-disciplinary analysts.

Karl Marx warned that "the tradition of dead generations weighs like a nightmare on the brain of the living". The past needs to be pondered as a basis for each new African generation to create a new future.

If individual African countries, together with regional and global agencies, fail to embrace this responsibility, Africa's much-heralded economic progress is likely to be engulfed in an ideological war which knows no state borders.

Disclosure statement: Charles Villa-Vicencio does not work for, consult to, own shares in or receive funding from any company or organisation that would benefit from this article, and has no relevant affiliations.