Before the advent of antibiotics in the 1930s, infections associated with E. coli claimed hundreds of thousands of human lives. Today, as we see a rise in the prevalence of drug-resistant E. coli infections, we risk a return to those dark days.

Most Escherichia coli bacteria, better known as E. coli, live a completely harmless life within the intestines of mammals. 'Friendly' bacteria in the gut (called 'normal flora') often help to synthesise some vitamins, and on occasion defend our intestines from other more harmful invading bacteria.

But while it's a friendly little helper in the gut, E. coli can be a ruthless killer in other parts of the body. It's the culprit in 85% of urinary tract infections, which can be fatal if not treated. In newborns, especially premature babies, E. coli can invade the blood and infect the coverings of the brain (the meninges), causing fatal meningitis.

A battle is currently being waged between bacteria (E. coli included) and modern medicine. One of the foot soldiers in this war is Dr Ombeva Malande, an MPhil paediatric infectious diseases student in the African Paediatric Fellowship Programme at the Red Cross War Memorial Children's Hospital. Malande's research focuses on the emergence and prevalence of drug-resistant E. coli at the hospital, particularly carbapenem-resistant Enterobacteriaceae (the family of bacteria to which E. coli belongs).

Carbapenems are a class of broad-spectrum antibiotics that form the last line of defence against E. coli infections in children. However, a group of 'streetwise' E. coli are now producing enzymes to disrupt the carbapenem molecule, building resistance to the only effective treatment left for pneumonia, meningitis, and ear and urinary tract infections in children.

"When the bacteria produce enzymes that render our antibiotics ineffective," says Malande, "we respond by adding new agents to the antibiotics, to fight the enzymes. However, the bacteria respond to these new agents faster than we can develop the enhanced drugs."

The bacteria acquire the ability to do this by altering their own genes, through mutation – or more commonly, explains Malande, by horizontally acquiring 'ready-made' resistance genes from other organisms. Some bacteria are able to share genetic information by hooking up to each other and sending information through little packages (called mobile transposons, or integrons). Horizontally acquired resistance genes are often carried in this way, on transmissible plasmids – small rings of DNA that are transferred efficiently from one cell to another by mating or conjugation.

These elements not only capture and organise the expression of resistance genes; they are also capable of moving from plasmids to the chromosome, a feature that stabilises their inheritance, making it easier to pass on their drug resistance to other bacteria. E. coli commonly uses this method of spreading resistance to Klebsiella, another member of the Enterobacteriaceae family.

"Once resistance has developed within a bacterial community, it's rapidly shared among the entire bacterial population, with serious consequences for public health," says Malande.

There is also an element of preferential selection in this process. When bacteria are exposed to an antibiotic and incomplete elimination occurs, bacteria still sensitive to the antibiotic are quickly killed off, leaving the resistant bacteria to flourish and replace the old population. Those bacteria that survive develop mechanisms to evade the treatment, which they then share with other bacteria populations. 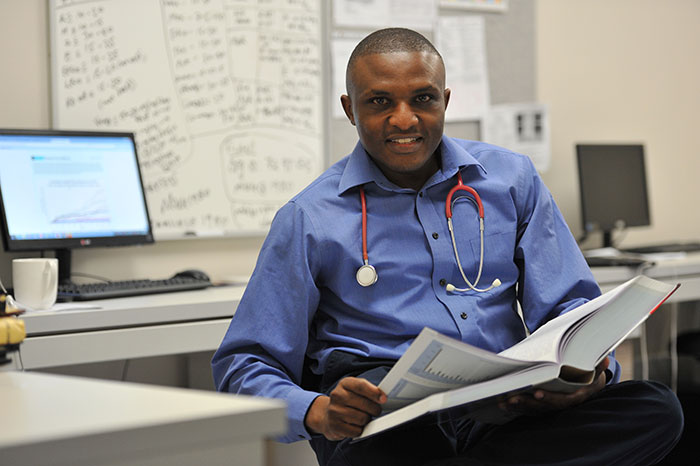 The overuse and inappropriate use of antibiotics is fuelling the spread of drug-resistant antibiotics. For Malande, this point cannot be emphasised enough: "The more antibiotics you use, the higher the chance of acquiring bacterial resistance. If you take antibiotics for the wrong reason or length of time, or in the wrong dosage, you contribute to the development of the resistance."

The particular challenge in Africa is that antibiotic prescription is not always carefully guided by laboratory studies; at the same time, use of low-quality antibiotics is rife across the continent, and levels of treatment adherence are not high. These circumstances contribute to the development of drug-resistant bacteria; and on a continent with so many life-threatening infections, that's a recipe for catastrophe.

"Research by the World Health Organisation suggests that more than 50% of all antibiotics prescribed are unnecessary. In fact, I think the figure is closer to 70 or 80%," says Malande. "We therefore end up with existing and new patients suffering diseases we cannot treat, or that we need newer and more expensive drugs to treat. These forms of the diseases also tend to be more aggressive. As a consequence, we see a higher rate of complications, longer periods of hospitalisation, and a higher death toll."

Story by Natalie Simon. Main image courtesy of Wikimedia under creative commons. Portrait of Ombeva Malande by Je'nine May.