University curricula in South Africa are still largely European or American in origin and focus. In some spaces, though, academics are starting to shift the terrain by introducing an African-centred curriculum.

In the past few months, the state of the curriculum at South Africa's universities has become a hot topic. This debate is part of a larger discussion about post-apartheid transformation. Some commentators have suggested that decolonising curricula will lower academic standards.

But early evidence from an 18-month-old research project suggests that altering elements of the curriculum boosts student engagement and expands the canon so that African experiences are taken seriously.

We have conducted qualitative research on curriculum content and students' experiences to trace what happens when Humanities curricula are deliberately changed to shift an institution's dominant ideologies. The research has focused on African-centred courses across several disciplines, including education development, film and media, gender studies, history, linguistics, philosophy, psychology and social anthropology.

While the two cases studies mentioned here are too few to represent what is happening across Humanities faculties, it is enough to illustrate the qualitative shifts that are possible.

The first case study comes from a third-year course run by UCT's department of social anthropology. For one of their assignments, students have to review an ethnographic work through two lenses: its politics of representation and the sorts of evidence it provides for the claims it makes. Students can choose from a list of 89 ethnographies or representations of culture. Sixty-one of these are related to Africa.

Importantly, the forms of representation are not limited to "traditional" anthropological texts. The list also includes African novels and poetry, on the grounds that while anthropology may have been closed to black African narrators during colonialism, it was never possible to silence them. They were not able to become anthropologists by the norms of the time, but they still were able to make pertinent commentary about culture.

The course convener argues that these texts can provide as much depth of representation as so-called scientific anthropological accounts. This approach upends the power relations of who was "allowed" to speak with authority about Africa at a particular point in the discipline's history.

For instance, in Okot p'Bitek's Song of Lawino, an epic poem based on the oral tradition, Lawino explains to her husband that despite colonisation, culture is not so easily changed:

Listen Ocol, my old friend,
The ways of your ancestors are good,
Their customs are solid
And not hollow,
They are not thin, not easily breakable
They cannot be blown away
By the winds
Because their roots reach deep into the soil.

This speaks to the tension between social continuity and social change, which is a key thematic that anthropology has attempted to analyse. Song of Lawino is able to present this thematic to students through the oral tradition. In doing so it foregrounds African ways of being in the world rather than colonial representations of African ways of being in the world. Students are able to engage with the key concerns of the discipline from a locally centred standpoint.

As part of the course, students must carefully and critically engage with the ways in which knowledge carries colonial histories. This is seen through the way that people are represented or how they represent themselves in a piece of work. They have been taught throughout their undergraduate degree to be critical of the things they read rather than just accepting traditional ideas of who is an authority and who is excluded from debate.

The doors that Steve Biko opens

The second case study comes from a foundation course that I convene and teach. It is designed to allow first-generation university students access to the hidden curriculum. These unspoken rules and assumptions are often taken for granted by students who come from privileged backgrounds. 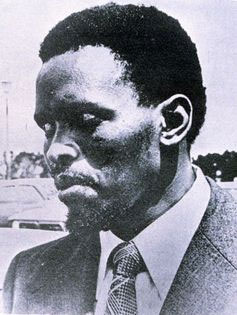 Steve Biko, who was murdered by apartheid government operatives in 1977. (Photo by Reuters.)

Students at South African universities usually learn about the core concepts and genres in the social sciences through the Euro-American canon. In this course, we use Steve Biko's I Write What I Like. Biko, who was murdered by apartheid police in 1977, pioneered the Black Consciousness movement in South Africa. Complex concepts like identity, race and socialisation are easily grounded in Biko's work. Importantly, these concepts are presented in terms that resonate with South African students.

The book has been extremely well-received. At the end of the first class in which we discussed I Write What I Like, a student approached me and said:

I want to thank you for these classes and the material. But you must be prepared for people to speak very loudly in your class. This is Biko, they will think they know more than you!

I replied that, as black South Africans, they may well know more about this particular form of identity politics than I did as a white Zimbabwean/South African social scientist. She laughed and said: "I didn't know the university could open up such spaces for us as students!" The text gave this student and the knowledge she brought with her greater legitimacy within the university space.

These case studies show that students in the Humanities engage more critically with the material they are set. Students are asking themselves, their classmates and their lecturers much more difficult questions. This level of engagement can only have positive benefits for the university as an institution which drives intellectual thought and for the development of an active citizenry. The research project is still ongoing across the three institutions, with much more data to be collected. But these preliminary findings suggest that academics have been engaged with notions of an African curriculum for quite some time and that they are finding creative solutions.

Written by Shannon Morreira, Lecturer in Education Development at University of Cape Town