Smoking in South Africa has decreased substantially over the past two decades, particularly among the young and the poor – and research shows that this is largely thanks to sharp hikes in excise taxes, which have pushed up the price of the average pack of cigarettes.

The cost has induced some smokers to give up, encouraged others to cut down on the number of cigarettes they smoke, and helped to persuade people not to start in the first place.

It's a scenario that has been extensively researched by the highly-respected Economics of Tobacco Control Project, based at the School of Economics.

"This is impressive in anyone's language. We see that smoking prevalence has decreased most among the poor and the young – the two groups most sensitive to changes in the price of cigarettes," says project director Professor Corné van Walbeek.

Excise tax currently stands at R12.45 per pack of cigarettes. An average pack of 20 retails for around R30, although Van Walbeek says there is something of a price war going on currently, due partly to an influx of cheap cigarettes into South Africa from importers wanting to take advantage of the profitable cigarette market. British American Tobacco (BAT) is the dominant cigarette producer in South Africa, and has been the price leader for many years. Despite the frequent tax increases and decreasing sales volumes, the profit per stick has grown enormously – to the extent that BAT is now more profitable than it was 20 years ago. In order to fight cheap competitors, BAT has slashed the prices of some of their prominent brands (Rothmans and Pall Mall) to between R20 and R23 per pack. Even the price of Peter Stuyvesant, its most important brand, has been reduced in the past year.

With about half of regular lifelong smokers dying of a tobacco-related disease, any reduction in the number of smokers is encouraging. But as Van Walbeek says, policy needs to be evidence-based.

The Project is proving its worth with a range of academic studies that could have impacts on policy across sub-Saharan Africa. Members have already advised government officials on tobacco excise-tax policy in a number of African countries, ranging from Ghana and Namibia to Botswana.

UCT master's graduate Nicole Vellios is one of the Project researchers whose work could feed into policy decisions in future. She poses a fairly simple question in her research: what are the determinants of smoking initiation? – that is, why do people start smoking? Up until now, research into this issue has been dominated by studies in high-income countries.

The price of cigarettes does not significantly affect smoking initiation for females; while Vellios did not extract the reasons in her research, she says this may be because girls or teenagers are often given their first cigarette by someone such as a boyfriend, brother or friend.

"Education levels in South Africa are improving gradually over time; and should the trends found in this paper continue, this should lead gradually to reduced smoking initiation in the next generation," says Vellios.

Living in an urban area increases the probability of smoking for both males and females. 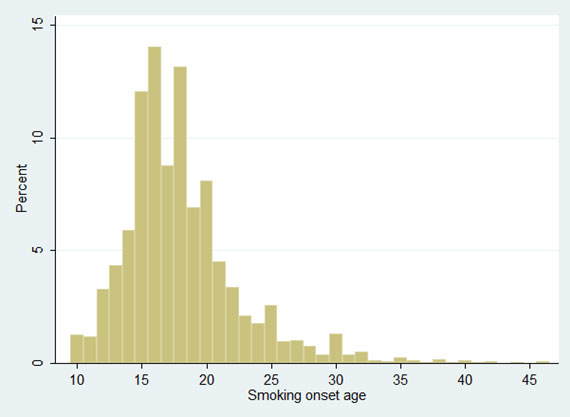 Eighty percent of smokers start by the age of 20 – which makes focusing on young people so important. (Source: NIDS 2008 DATA)

The average age at which South Africans start smoking differs slightly according to race. While there are substantial spikes at ages 16 and 18, the average age peaks at 17 years for White and Asian males, and at 17.2 years for Coloured males. Smoking initiation is substantially lower among African males – and peaks later, at around 18.5 years.

The average age at which girls or women start smoking is 16.8 years for Coloured females, 18.1 years for African females and 18.3 years for Whites and Asians.

The statistics reveal that Coloured South Africans smoke more than any other race in South Africa.

Van Walbeek says that excise-tax increases have been successful in curbing smoking, as cigarette manufacturers have generally passed the increase onto consumers in the form of higher prices. In many cases they have even overshifted the taxes. "When the tax increases by 50 cents a pack, the industry has increased the price by substantially more than 50 cents," he remarks.

Other tobacco-control measures have been introduced alongside an increase in excise tax. In South Africa, cracking down on smoking in public places, stringent packaging requirements, and the banning of advertising, promotion and sponsorships has also helped to stub out smoking.

"It's been a rewarding field to work in," says Vellios. "I hope the research will make an impact, and will benefit people and public health in South Africa."

The Project is also hoping to make more inroads into tobacco-control strategies elsewhere in Africa. While smoking prevalence is still low in many African countries, it is rising rapidly; as smoking rates have subsided in the US and many other countries in the developed world, the tobacco industry has intensified its marketing on the African continent.

"These countries can avoid most of the tobacco epidemic if they impose strong policies that include high and rising excise taxes. Many countries have poor excise-tax structures, and often these poor structures are exploited by the tobacco industry, to their own advantage," says Van Walbeek.

He's hoping his committed group of researchers will boost knowledge about tobacco control and help to strengthen support for tobacco-tax and -price increases in sub-Saharan Africa.

The Economics of Tobacco Control Project works in partnership with the Bill & Melinda Gates Foundation, the American Cancer Society and the African Capacity Building Foundation.