22 April 2015 | Story by Newsroom
Climate-change-induced drought is threatening the world's biodiversity hotspots; but a new, standardisable system to describe drought strategies in plants will help conservationists understand the impact of future drought, says a new paper in the Proceedings of the National Academy of Sciences.

Much like measuring blood pressure and metabolism in humans to determine how they might react to thirst or hunger, the system measures simple plant traits to get an index for responses to drought-induced starvation and thirst.

Understanding how sensitive biodiverse regions are to drought is crucial. But although plant physiologists have hundreds of years of research to draw on, predicting the impacts of drought on plants – particularly those in complex, biodiverse systems – has been difficult. There are no simple, universal measurements to determine how different species are likely to react to dry spells.

These hotspots include the tropical rainforests, the Australian scrubland, and fynbos, where lead author Dr Rob Skelton did the research that underpinned the paper.

Dominated by restios, proteas and ericas, South Africa's fynbos stretches from the Eastern Cape to the Northern Cederberg Mountains. Over 9 000 species co-exist in this great swathe of biodiversity.

Skelton is now doing postdoctoral studies in plant science at the University of Tasmania in Australia, but his "brain child" stems from his PhD research (he graduated at UCT last year), supervised by co-authors Dr Adam West of UCT's Department of Biological Sciences and Professor Todd Dawson from the University of California, Berkeley.

"The beauty of these plant traits is that they are relatively easy to measure, and can be gathered for a large number of species," commented Skelton. 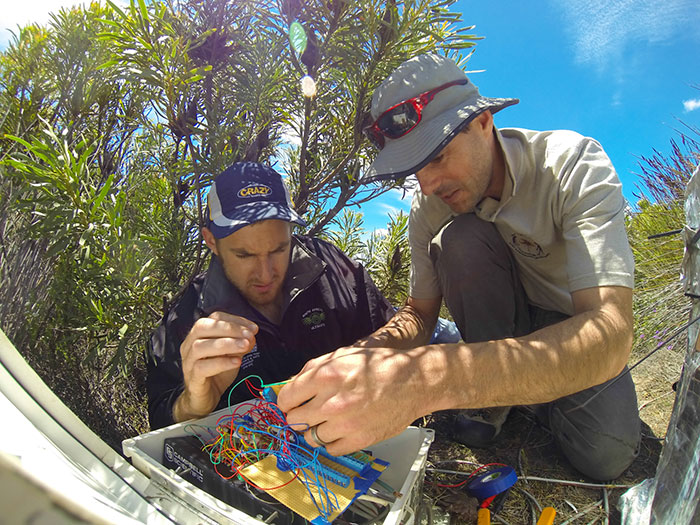 Heartbeat of a biodiverse hotspot: Drs Rob Skelton (left) and Adam West attaching probes to fynbos to measure the biological 'pulse' of these plants, part of a new system to describe drought strategies in plants.

To predict how different species respond to drought, the researchers focused their trait selection on the classic 'water-for-carbon' trade that plants perform.

The two components of interest for this 'water-for-carbon' trade are the xylem – the pipes in the stem that allow plants to transport water from the soil to the leaf – and the stomata, the pores on leaf surfaces through which plants take up carbon for photosynthesis (and lose water).

The system was developed using data painstakingly gathered over Skelton's two years of fieldwork in the Jonaskop region near Villiersdorp, as well as from careful laboratory measurements. A key component of the fieldwork involved measuring the "pulse" of the plants.

To do that, Skelton was up in the mountains before dawn a few days every month to measure the plants' water stress and carbon gain. Part of the project involved building miniature probes and attaching these to plant stems, and then logging that data, every 15 minutes, for two years. (Skelton notes in his blog that a "generally optimistic disposition" is necessary to conduct this kind of work!)

These field observations were followed up with detailed laboratory measurements of the stomatal and xylem responses to drought. To do this, Skelton developed a standardised mathematical technique to model these responses, and allow inter-comparisons between the species.

And although he found a continuum of drought-response strategies in these communities, he also found considerable variation in drought response among the species.

"While the three familiar fynbos plant types – like restios, ericas and proteas – all showed similar classes of response to desiccation or starvation, there were considerable differences among species, showing how important biodiversity might be in protecting ecosystems from change." 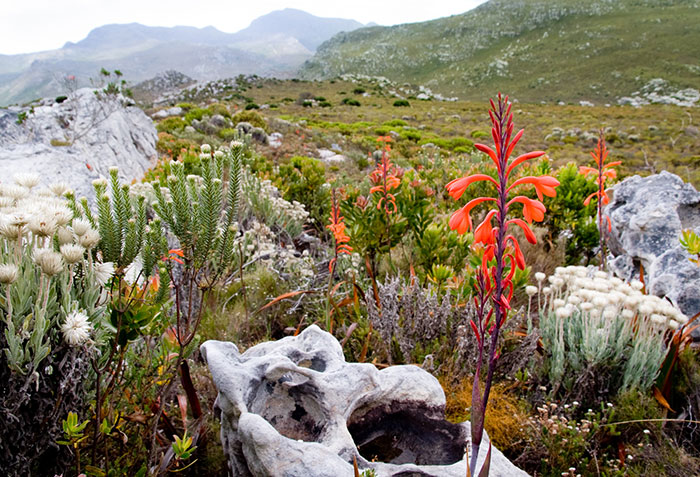 Jewels in the landscape: The fynbos is a swathe of drought-sensitive biodiversity that stretches from the Eastern Cape to the Cederberg Mountains.

Very few studies have addressed co-ordination between stomatal regulation and xylem vulnerability and used this to predict how likely a species is to die during drought.

"Even fewer studies have used functional traits to gather data about a large number of species," Skelton noted.

Closer to home, the study has important implications for fynbos communities, even those decimated by the recent fires.

"Our study suggests that distinct mechanisms of mortality among the three major groups in combination with future drought events might shift the composition of fynbos communities," said Skelton. "Worryingly, many restios and ericas appear to be particularly sensitive to future drought mortality."

The paper is a triumph for the researchers, who authored the work as part of a tri-generational group; Todd supervised West's postdoctoral studies, and Skelton was West's first PhD student.

Looking at the whiteboard in his UCT office, West muses: "Rob and I spent a lot of time at this whiteboard, and years in the field; so it's great to see how it's turned out."

[The Proceedings of the National Academy of Sciences (PNAS) is one of the world's most cited and comprehensive multidisciplinary scientific journals. For more information on the article, go to www.pnas.org/content/early/2015/04/15/1503376112.abstract]