Confucius Institute: A bridge between Africa and China

Shengyong Qin throws a small, brown cake into a white porcelain cup, and tips boiling water from the teapot.

The aroma rising from the coarse, bark-like leaves is earthy, almost pungent.

It's Pu-erh tea, Qin explains, sought-after for its health properties, and named after a centuries-old city in China's Yunnan province.

The tea leaves are sun-dried, fermented, rolled and then packed into cakes or bricks, and sometimes aged further in mandarin orange shells, the peel contributing anti-inflammatory properties to the tea.

And like wine, Pu-erh teas can be classified by year and region of production.

Qin decants some of the tea into the second cup on the tray.

"In Chinese culture, a cup that is too full says the conversation will not go well," says the new director of UCT's Confucius Institute, now part of the International Academic Programmes Office.

It's a nice gesture, in this corner of middle campus that is distinctly Chinese in its look and feel − and still in a celebratory mood, after the Chinese Spring Festival (Chinese New Year).

Even among the multilingual UCT students (over 100 countries are represented on campus), the rapid-fire sound of Mandarin is exotic.

Chinese is a symbolic language, each written character signifying an object: fire, tree, water, tea. All varieties of spoken Chinese are tonal; each syllable can have a number of different meanings depending on the intonation. Mandarin, for example, has four tones, Cantonese has between six and nine, and Taiwanese has seven.

"But you need to be embedded in Chinese culture to understand the tones," says Qin with a wry smile.

UCT is one of 280 universities in 50 countries that host Confucius Institutes, integrating Chinese into their credit course system. The centres take their name from the influential Chinese philosopher, teacher and political figure known for his popular aphorisms.

The UCT institute celebrates its fifth birthday in October.

With China's star rising in Africa, there are 42 institutes on the continent. South Africa has the largest number; and besides UCT's, they are hosted at the Universities of Johannesburg and Pretoria, and at Rhodes, Stellenbosch, and the Durban University of Technology.

With a background in international relations and political communication, he started teaching at Sun Yat-sen University, UCT's Chinese partner at the institute, 14 years ago, after completing a PhD there. In October last year he left his job as associate professor of the Foreign Language Teaching and Research Centre at Sun Yat-sen to run the UCT institute.

For teaching support, Qin draws on the resources of Hanban, the colloquial abbreviation for the Chinese National Office for Teaching Chinese as a Foreign Language.

Learning to speak Chinese has many benefits in Africa, he says. Like China, South Africa is a member of the BRICS community, and China is Africa's largest trading partner. In exchange for resources like iron ore, oil, coal and other raw materials, China has offered roads and ports, mines and schools – and even financial bail-outs. 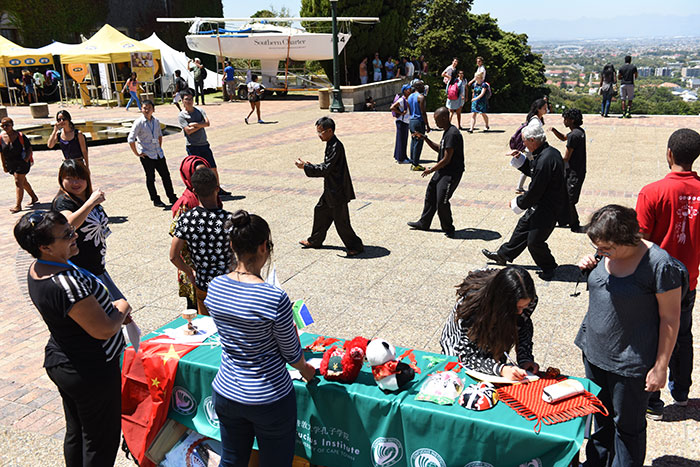 In celebration of this year?s Chinese Spring Festival – in the Year of the Ram – the Confucius Institute organised a tai chi demonstration together with a short Chinese language lesson.

With China rising as a second-largest economy in the world, Qin points out that UCT's students will be doing business with Chinese companies. South Africa itself has Africa's largest Chinese community (over 70 000), mostly in the economic hub of Johannesburg.

The history goes back to the 1670s, when the first Chinese settlers were exiled from Batavia by the Dutch and sent to the Cape colony, ostensibly to become farmers. This small population grew markedly after 1870, once diamonds and gold were discovered. But growing Sino-African partnerships have also necessitated platforms for cultural and language exchanges.

The UCT Confucius Institute also participates in the faculty's outreach programmes to local schools like Claremont High, where Mandarin has been introduced.

May will see the launch of the China-Africa Colloquium, during Africa Month.

Groups beyond the university are also benefiting. The South African Police Services, for example, who are becoming increasingly involved in cases to do with the local Chinese community and growing Chinese business interests.

For over a year the institute has been teaching Chinese language and culture to members of the police, in clusters and units that span areas from Claremont to Delft, as well as the border police at Cape Town International Airport.

Of his sojourn in Cape Town, Qin seems bemused to find himself in a country he never imagined he'd visit.

After the bustle of China, he finds South African cities well organised and the people chilled; with less of the aggressive and ambitious energy of his compatriots. And he's at home at the 'university on the hill' in Cape Town, where he's already scouted out the local hiking routes.

"For most Africans, China is a benign and friendly country," he says in parting.