Forget the myths about immigrants

A new wave of attacks on foreign migrants working in the informal economy makes it clear that the problems that bubbled over recently are far from resolved.

The official response from Small Business Development Minister Lindiwe Zulu was to suggest that "foreigners" had certain underhand "trade secrets" that they should be made to share with their South African competitors.

This suggestion is akin to insisting that big formal retailers such as Pick n Pay share their business strategies with their competitors.

It is also off the mark, because new research shows that far from resorting to underhand business practices that give them a competitive edge, foreign migrants are simply particularly hard-working entrepreneurs who employ similar techniques to those of formal retailers.

This finding is among many drawn from extensive surveys with foreign informal business owners in Johannesburg and Cape Town by the International Migration Research Centre, alongside researchers at the Southern African Migration Project, the University of the Witwatersrand and the University of Cape Town.

The research has just been completed, and the full results will soon be available.

Here is an early snapshot of the findings: 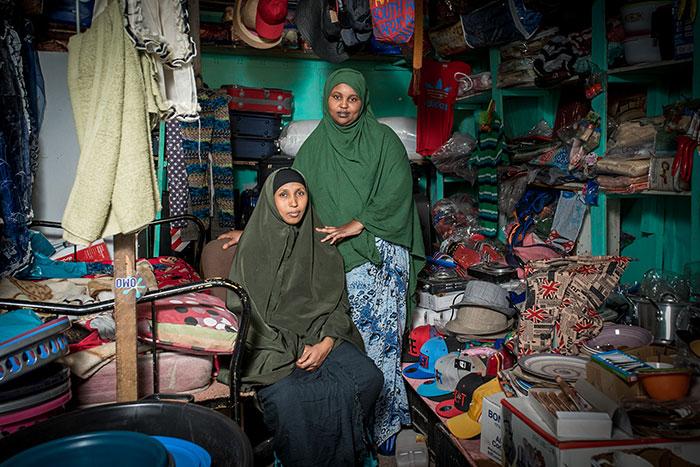 Somali migrants Muminom Omar and Ifrah Ahmed, who live and work in the Western Cape.

Taken as a whole, the study suggests that foreign-owned informal businesses are interwoven with the local economic landscape, and are making a contribution that has not been sufficiently acknowledged in recent debates and policy pronouncements.

Migrant entrepreneurs are celebrated in many countries for their contribution to economic growth and employment creation. In South Africa, the opposite appears to be true, as the ongoing violence against migrant businesses makes all too clear.

In fact, the problems foreign entrepreneurs face are similar to those faced by their South African counterparts – too many competitors, lack of access to credit, and theft and other crimes. In addition, as the new wave of violence has painfully demonstrated, they experience frequent verbal and physical abuse because they are foreign. 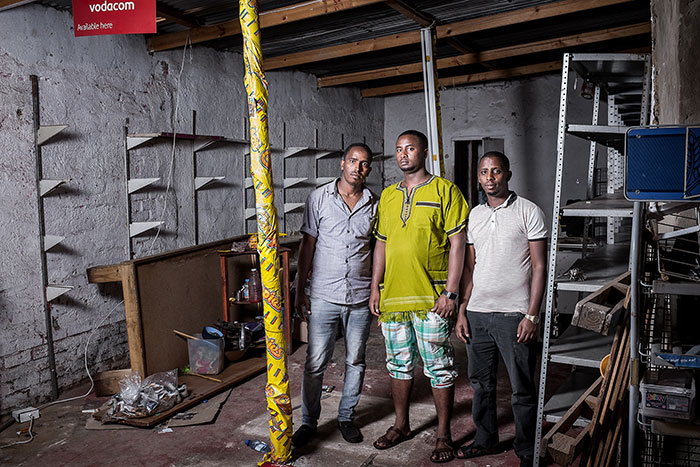 Ethiopians Abbiye Mahamed Osman, Ismail Ali Hussain and Abdoshe Abdul Jalil in their Soweto store after it was looted.

The truth is, most of the competitive strategies employed by foreign businesses simply follow the example of South Africa's formal retailers. For example, they tend to:

Have long opening hours. Most migrants and refugees work extremely long hours, and their spazas, for example, often open at 5am and close at 11pm;

Take care with sourcing goods. While some buy collectively from wholesalers, the importance of bulk buying is often exaggerated. Rather, most foreigner shopkeepers carefully compare prices of wholesalers and often share transport costs;

Have a loss leader, which involves selling a key commodity such as bread below its market cost to stimulate sales of more profitable goods; and

Rely on high turnover and a low mark-up on goods for profits. Even then, the profitability of the foreign-owned business is often overestimated: the majority of Johannesburg migrant business owners, for example, reported profits of R5 000 or less a month.

This suggests that there is nothing unique about the business practices and strategies of migrant entrepreneurs.

Creating platforms where foreign and South African entrepreneurs can engage with one another would be a positive step – but Zulu's plan for a detailed "sharing of business practices" is no answer. Rather than focusing on regulating foreign businesses and telling them to share their secrets, the government would do better to focus on putting in place policies that support the informal economy.

While initiatives such as that in Gauteng to revitalise township economies are promising, they should not exclude the foreign entrepreneurs, who contribute a great deal to the South African economy.

Story by Jonathan Crush, an honorary professor at UCT and director of the Southern African Migration Project's Growing Informal Cities project, and Caroline Skinner, senior researcher at the African Centre for Cities and urban policies director for the global research policy network Women in Informal Employment: Globalising and Organising.

Image by Thom Pierce, a social documentary photographer, who was commissioned to produce a series of images that reflect the experiences of foreign migrants working in the South African informal economy.

This story first appeared on TimesLIVE on 1 March 2015.