In a riveting public discussion in UCT's Jameson Hall, attended by a group of #RhodesMustFall protesters, the judges of this year's Man Booker International Prize discussed the thinking behind this year's watershed list of finalists and the literary politics of the 'Global South'.

On Tuesday 24 March 2015, the Man Booker International Prize judging panel – made up of Nadeem Aslam, Wen-chin Ouyang, Edwin Frank and Elleke Boehmer, and chaired by writer, cultural historian and mythographer Marina Warner – announced this year's finalists. It was the first time ever that the announcement was made on the African continent, and it can be considered a watershed list, signaling a bold and receptive new moment for the multiplicity of world literature and writing in translation.

South Africans were quick to herald the presence of Marlene van Niekerk, author of Triomf and Agaat, among the ten chosen authors. But this is also a moment of celebration for African literature – and for the multi-lingual, multi-vocal stories of world literature more broadly. Along with Congolese writer Alain Mabanckou, Ibrahim al-Koni of Libya and Mozambican Mia Couto, one of the most prominent writers in Portuguese-speaking Africa, Van Niekerk is one of four African writers on this year's list. The shortlist also features a writer from the broader African diaspora, Maryse Condé, who hails from Guadeloupe and spent 12 years in West Africa (Guinea, Ghana and Senegal). The other finalists are: César Aira (Argentina), Hoda Barakat (Lebanon), Amitav Ghosh (India), Fanny Howe (United States of America) and László Krasznahorkai (Hungary).

In a selection that goes some way toward undermining the centrality of 'the West' in the literary establishment, as well as the primacy of English, eight out of the ten authors hail from the 'Global South' and eight have been translated into English from original texts in their mother languages.

For an instant, this headline moment for world literature risked being overshadowed by the institutional tumult triggered by the #RhodesMustFall protests. Instead, these two stories were brought together at a public discussion in Jameson Hall on Thursday night, 26 March 2015, exploring the topic of world literature from the perspective of the south and the role of the Man Booker International Prize in shaping the global literary field.

After some opening words by Vice Chancellor Dr Max Price, the 2015 judges were introduced by Associate Professor Meg Samuelson, who has played a key role in forging the partnership between UCT and the Man Booker International Prize. She hailed this as the most "international rather than Anglo-global shortlist yet" and noted how its timing coincides with an extensive curriculum review in the Department of English and with calls for removal of the statue of Cecil John Rhodes – a "concrete manifestation of the unfinished business of Northern imperialism" in South Africa.

Durban-born writer and critic Prof Elleke Boehmer described the 'Global South' as "a term of provocation" and "an oxymoron that seems to deconstruct itself, because how is the south also the entire globe?" She noted how it started out as something of an economic or political term, which one associated with the alternate or peripheral centres of economic power renegotiating and realigning their position in the world today. "The term questions the geographic equatorial alignment of the world," she said. "What we were looking for were writers whose works reshape the familiar, or reflect on their own locale in a way that is estranging. Literature offers us ways of creating new maps across the south. It's a way of discovering new centres in the world and remaking our own worlds."

Picking up on the subjectivity of geography, Pakistan-born novelist Nadeem Aslam told the audience of his disregard for objectified geographical distinctions. He was warmly applauded when he gestured toward Table Mountain, saying: "This is not your mountain; it is my mountain. Just as the great Indus River is not mine; it is yours." He told of a map that hangs above his desk in his study in London. He cut up a map of Pakistan and a map of Britain and stuck them together and that is how he knows and makes sense of his world, he said – adding that he is committed in his own reading and writing to getting to know the "hidden structures of power and corruption that flow between places – both in the past and the present".

Wen-chin Ouyang, who was born in Taiwan, grew up in Libya, and is now professor of Arabic and comparative literature at SOAS at the University of London, recalled how the classic postcolonial novel, Season of Migration to the North (1969), by Sudanese writer Tayeb Salih had realignedthe East-West orientation of her own world axis. "In China, our West is India and the Middle East. If you go to the Middle East, the West is Europe. If you go to America, what is the West? Is it China ... Asia?" she quipped.

"Many of us who are involved in academic discussions about what world literature is, tend to think of it as a canonical work within a national literature that has travelled to an international arena through the medium of translation and the translation goes in one direction – toward the Western metropolitan centres of Paris, London and New York," she said. "But in the past few years, the Chinese have been responding to this West-centric way of thinking about literature. I have been hearing discussions where the centre of the world is located in what you might know as the East. I've also heard discussion of 'script worlds' – using scripts to identify a centre for all the literary worlds that use the same script."

Poet Edwin Frank, who has been the editorial director of the New York Review of Books Classics series since its inception in 1999, reflected on the history of the novel as a form, and its association with markets and newspapers. The importance of translating and making accessible news from further afield has always been a key function of the novel – translating experiences of others and otherworldly selves and worlds into the terrain of self, he said.

Where protest and literature meet

It was during Marina Warner's meditation of the "transluminating" power of literature and the centrality of pleasure to the act of reading that a small group of student protesters, dressed in black, entered the auditorium. They moved silently to the front of the hall where they stood, holding up banners, which read: 'Rhodes Must Fall', '#OccupyBremner', 'The Inevitable Fall of Rhodes'. Instead of disrupting the discussion, their presence introduced a heightened poignancy, amplifying the decolonial energy of the night. 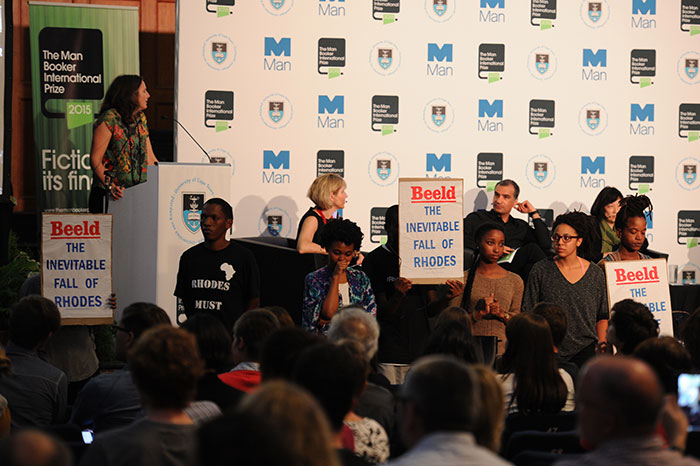 The silent protest during the Man Booker public panel discussion, staged in support of the #RhodesMustFall campaign.

They were welcomed by the speakers. Nadeem Aslam addressed them directly, embracing them in common cause. "I actually see my novels as a way of protesting," he said. They remained silent. When they exited the hall, they were thanked by Marina Warner, and applauded by the audience.

While it might have a genuinely decolonial agenda, as a British-convened and administered prize, the Man Booker International could still be said to have a colonial imprint. At one point a young man challenged the panel, asking them if the Man Booker International Prize had been conscious of partnering with an institution that actively diminishes and delegitimises black voices. Warner responded that she was not aware of UCT being such an institution, but that she had been "pleased about making the announcement in a university setting because I wanted to go beyond the commercial setting of the literary festivals". Her response recalled her 2014 essay in the London Review of Books against the increasing managerial culture and corporatism of universities.

The five panelists, each of whom has absorbed the words of around one hundred writers over the past two years, reflected on the rare capacity of literature to open worlds and establish empathy – not just for the external other, but for the parts of ourselves that are strange and unknown.

"Fiction can enlarge the world for us all and stretch our understanding and our sympathy," said Warner. "The novel today is in fine form: as a field of inquiry, a tribunal of history, a map of the heart, a probe of the psyche, a stimulus to thought, a well of pleasure and a laboratory of language."

The 2015 Man Booker International Prize winner will be announced at the Victoria & Albert Museum in London on 19 May.