The statue of Cecil John Rhodes overlooking the UCT rugby fields must go, say students. UCT's Student Representative Council (SRC) is planning various protest action unless a date is set for its removal.

In the latest development the SRC is planning a march to Bremner building to ask for the date of the statue's removal. Should no date be given to them the student body will resort to an "indefinite occupation of Bremner and the withdrawal of SRC participation in university committees".

The announcement of these plans follows a student debate at Jammie Plaza on Thursday 12 March around the topics of structural racism and white privilege at UCT. The debate ended with students chanting "we want a date".

The chant was started by Chumani Maxwele, a political science student, who last Monday (9 March) threw human faeces at the statue in protest to the perceived lack of racial transformation at the university.

According to Kgotsi Chikane, one of the student organisers, the debate was not an opportunity for students to vent. "This space has been created so that we can come up with ideas. When you take this mic you're not just venting your frustrations, you're sharing a tangible way for us to go forward." 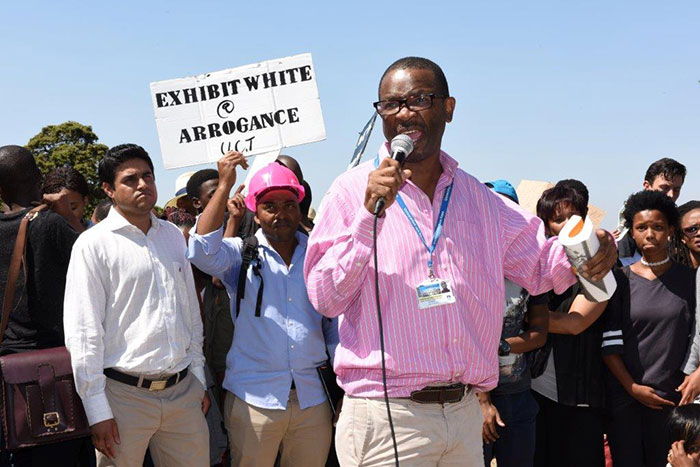 Assoc Prof Xolela Mangcu put his weight behind students' call for the removal of the Rhodes statue.

Another speaker Assoc Prof Xolela Mangcu from the Department of Sociology felt that as a member of the staff, it was important for him to stand in solidarity with the students: "Too many times the issues raised here have completely been disregarded. I hope that this gathering will be the energy not just behind the removal of the Rhodes statue, but the transformation of this institution for its own good."

He called for the university not to view the issue of symbols in isolation, but to see it "tied to staff transformation and curriculum [change]" among other things.

In his speech, Maxwele thanked Vice-Chancellor Dr Max Price for "igniting a spirit of activism" in students. He recalled a debate organised by humanities dean Prof Sakhela Buhlungu in October last year, where Price spoke of the statue in relation to the Eurocentricity prevalent at the university. "Interestingly also was Dr Price's observation that black people at UCT feel uncomfortable," he added.

Many black students participating in the debate referred to this discomfort, which they said became particularly acute when walking past the statue. One of the alternatives debated was to move the statue from upper campus to a less prominent place on campus. Another student suggested that all "apartheid paraphernalia" on campus be rounded up and put together in a space where it can be "critically engaged with" on a regular basis.

The comments and suggestions gathered from the debate will be put together in a document and handed to Council, said Chikane.