Using aerospace technology to look at dwindling bearded vulture populations from afar has offered fresh perspectives on the contribution of human beings to the species' steep decline.

The birds earned the nickname because of their habit of dropping bones from a height to feed off the marrow inside.

Amar said that satellite trackers had been attached to 18 Bearded Vultures, revealing that collisions with power lines and poisoning were two major vulture hazards, killing half of the birds in the satellite tracking survey.

"Once widespread throughout much of Southern Africa, the species is now critically endangered, with a nearly 50 per cent reduction in nesting sites since the 1960s. (They are) now restricted to the Drakensberg mountains in Lesotho.

"But even in these isolated mountains the population continues to decline, due to human encroachment on nesting sites and feeding territory."

Results, they said, also suggested that food abundance might influence the bird's overall distribution, and that supplementary vulture-feeding schemes might be beneficial.

The study concluded: "We recommend that mitigation of existing power lines, stricter scrutiny of development proposals, and proactive engagement with developers to influence the placement of structures is essential within the home range of a territorial pair."

In a second study conducted between 2007 and 2014, titled 'Differential Range Use between Age Classes of Southern African Bearded Vultures (Gypaetus barbatus)', also authored by Krüger, Amar and Dr Timothy Reid, data from the satellite trackers backed up the findings made in the other paper. 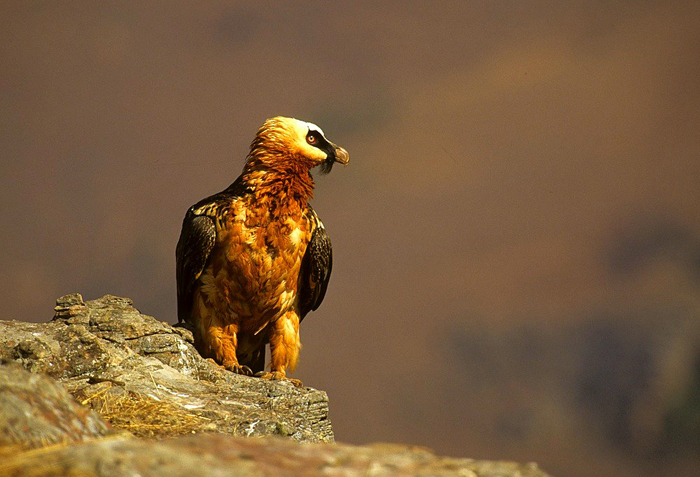 "The trackers... provided critical information on movement patterns and mortality.

"Tagging enabled dead birds to be recovered quickly and their cause of death determined... The tracking data also provided new information about the birds' ranging behaviour."

They said some young non-breeding birds patrolled an area the size of Denmark, and the average adult bird had a home range of about 286km2.

"The range was much smaller for breeding adults, at just 95km2."

Researchers used meat lures to capture the birds, which were then each fitted with a 70g solar-powered tracker designed to relay detailed information every hour between 5am and 8pm, including GPS co-ordinates and flight speed.

"The more they travel, the more they risk colliding with power lines or falling prey to poisoning," said Amar.

Plans for multiple wind farms in and around the highland regions of Lesotho, he explained, would likely place even more pressure on this vulnerable species, and might be "the final nail" in this species' coffin.

Last year, Birdlife South Africa, custodian of the International Union for Conservation of Nature (IUCN) Red List of Threatened Bird Species, globally uplisted the species from the 'Least Concern' category to 'Near Threatened'.

The organisation said there were only 400 individuals and 100 breeding pairs remaining in the wild in South Africa (Free State, KZN and the Eastern Cape) and Lesotho (mainly restricted to the escarpment and Lesotho highlands).

Dr Hanneline Smit-Robinson, terrestrial bird manager at the organisation, said South Africa and Lesotho shared the responsibility of safeguarding the populations of Bearded Vultures in the Lesotho Highlands and the surrounding escarpment of South Africa.

"Birds do not observe political boundaries, and the populations span South Africa and Lesotho. Significant impacts on the birds in one country will spill over to its neighbour. We therefore believe that the project has a responsibility to respond to the threat that the proposed Letseng Wind Farm poses to populations of Bearded Vultures, as further declines of birds in Lesotho will severely impact the viability and survival rates of the vultures in South Africa."

She said at the time that vultures played an important role in ecology, the economy and in culture.

"They are scavengers, and by disposing of waste and carcasses they help control populations of other disease-carrying scavengers and pests. In this way they help protect human health, as well as that of domesticated animals and wildlife."