Beyond the punishment paradigm: combating the drug trade

A purely punitive approach to criminal justice leads to more prisons being built, and more people being housed in them. The legal fraternity knows this well, says senior lecturer in criminology Kelly Phelps.

"Put simply, prison doesn't work most of the time – and we know that, but we haven't got a better idea for most of the people," says Phelps.

Dr Simon Howell of the Centre for Criminology uses the drug trade as an example to demonstrate that mere policing won't make a big enough dent in the problem.

"South Africa has recognised that the punitive approach doesn't work," says Howell. "The famous saying is that the war on drugs has failed, and it has failed. It's failed spectacularly. You're talking $50 billion a year globally spent on policing drugs, and it doesn't do anything."

In the context of the drug trade, the punitive model can actually exacerbate the problem.

Take tik – crystal methamphetamine – for example. The 'demon' drug, it's especially popular among working-class and unemployed communities in the Western Cape. Users of the drug are similarly demonised and cast out of mainstream society, and often find themselves in jail, says Howell.

"If you trace the logic of punitivism all the way back, you find that it is inherently wrapped up in the way we articulate the problem itself," Howell argues. "We talk about justice and stuff, but throwing someone in a police van is violent. If you're already feeling excluded from society – pissed off that promises from '94 haven't been realised, that you're still living on the Cape Flats, and you still don't have a job – you're going to get even more angry and you're going to take more drugs, and you're going to join gangs, and get sent to a prison where the gang system is entrenched."

Howell argues that unleashing the military onto the Cape Flats would only reproduce the fear and antagonism that has often existed between communities and the state, further undermining the police's capacity to access the resources they need – and ultimately fuelling the conditions that allow drug use and crime to proliferate.

"So the punitive model doesn't work. You need to deal with the conditions that encourage the drug trade to proliferate – and for that, you need multiple, strategic interventions," says Howell.

The entire social structure must become less fertile ground for drug trade to flourish. This could be done by creating viable alternatives to a life of drugs and gangsterism, Howell argues – such as employment and education opportunities. 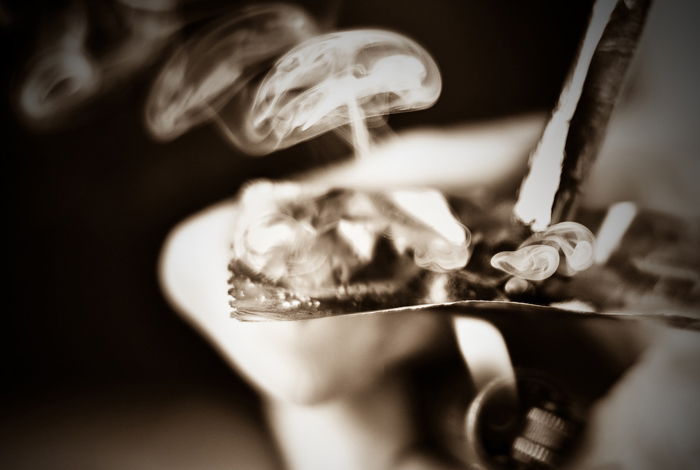 Huffing and puffing: Dr Simon Howell argues that traditional punitive approaches are doing more harm than good in combating drug use and the drugs trade.

With regard to cannabis, legalisation isn't the answer, either. This would merely serve to placate middle-class recreational users and save them from falling foul of the law; but the ones who would suffer are those who rely on the trade to live, says Howell.

Often these people don't want to be involved in the drug trade.

"They do it because in the Transkei it's the only cash crop you can really grow – they do it to support their families."

The answer, then, lies in creating economically viable options outside of the drug trade: "You'd need to find a cash crop that grows like cannabis [which can be harvested up to four times a year] ... but few are as viable," is Howell's thesis.

How to break the cycle?

In parts of Uganda, women spend days brewing a particularly potent alcoholic beverage, which they sell to raise funds to send their children to school. The obvious solution there is to fix the schooling system so that poverty is no longer a barrier to education, says Howell. Jail, on the other hand, won't uproot the malady.

You need to engage with issues of development and health to deal with drugs over the long term, says Howell.

"There are people who are doing work on neurobiology and the damage drugs cause because they undermine brain development, which increases the likelihood of people becoming violent.

"You need to break that cycle, and that cycle can be broken by police intervention, but you need to have support systems in place. At the end of the day, government can't do that, unfortunately."

Howell works with a SAPS sub-committee dealing with drug use in in Khayelitsha. They have the departments of social development, education and health on board, as well as NGOs, and it's this kind of multi-pronged approach that he advocates.

"Ideally, when you police drugs, using the police should be the last resort. Not the first. Because it necessarily creates the very violence in which drug use becomes more entrenched."