For over a century the sudden death of Constance Wilde, wife of the famous author and playwright, Oscar Wilde, has remained a mystery. Now, thanks to medical sleuthing by retired UCT academic and psychiatrist, Dr Ashley Robins, and the Wilde's grandson, Merlin Holland, the cause of Constance's death may finally have been discovered.

Constance Wilde died suddenly in Genoa, Italy on 7 April 1898, from complications following surgery for the removal of a uterine fibroid. She was 40 years old. These facts, however, describe only a small part of the circumstances that surrounded her death.

Constance had fled to Genoa to escape the scandal and spectacular fall from grace of her husband, who had been found guilty in 1895 of the crime of being homosexual. She found herself in a foreign city, with two young sons, having abandoned her career as a children's author and her role as a women's rights advocate. In addition she was plagued by mysterious physical symptoms such as an inability to walk, exhaustion, pain and facial paralysis: symptoms that many doctors had tried – unsuccessfully – to treat.

Enter the urbane and seemingly knowledgeable Italian gynaecologist, Luigi Maria Bossi, who claimed that he might provide a cure.

Reviewing old documentation, Dr Ashley Robins, a retired UCT academic and psychiatrist, posits that Constance gave her consent to undergo surgery, believing a cure was possible. "Bossi believed that some patients with neurological illness stemmed from women's reproductive organs (pelvic madness), even though at the time such ideas were already discredited. It is likely that Constance died of paralytic ileus (bowel paralysis) brought about by the operation."

Although at the time Bossi did not suffer any consequences over the botched surgery, he was suspended many years later from his professorship at Genoa University due to professional misconduct, before being fatally shot by the jealous husband of one of his patients.

According to Robins and Holland's re-examination of the correspondence between Constance and her brother, she first started displaying symptoms almost a decade before her death. Their recently published Lancet study states: "Her nine-year illness was characterised by widespread pains, right leg weakness, tremor of the right arm, profound fatigue, and a left facial paralysis. For the first seven years the clinical picture was dominated by intermittent acute episodes followed by extended periods of recovery; in the last two years her disability became permanent with gradual deterioration. A likely diagnosis is multiple sclerosis of the relapsing-remitting type that subsequently developed into secondary progressive multiple sclerosis."

This debilitating neurological disorder is thought to be an auto-immune condition leading to a degeneration of myelin, the substance that protects nerve fibers from damage. Although the illness was first described by Jean-Martin Charcot in 1868, physicians of those times may not have associated Constance's symptoms with this fairly recently discovered disease. 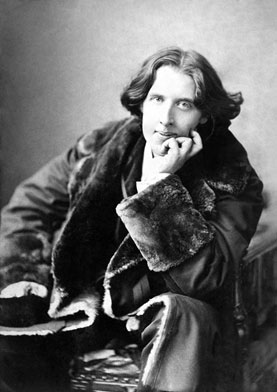 What prompted Robins and Holland to re-examine these century-old letters? In Robins' case this latest discovery has been preceded by a lifelong fascination with Oscar Wilde. "My mother would read me Wilde's fairytales as a child, but she would never explain the circumstances of his downfall. I became fascinated by him, his wit and larger-than-life personality." In 2000, the centenary of Wilde's death, Robins played a part in the discovery that he died from meningitis brought on by chronic middle ear disease, rather than syphilis as had been speculated previously. In 2011 Robins also published a book analysing Wilde's personality and retrospectvely diagnosing him with hysterical personality disorder.

Merlin Holland, Oscar and Constance's grandson, has mentioned in a previous interview that while his mother was alive she had worried that revealing the contents of the letters would encourage people to sensationalise Constance's life and death. With this new discovery, however, previous ideas that her death had been caused by a fall or syphilis (contracted from Oscar) have all been proven untrue. In Holland's words: "I rather feel this will put Constance to rest, poor thing."

Almost 120 years after they died, it has now been shown that Oscar and Constance died from completely unrelated medical conditions. Nonetheless their deaths share common, and tragic, elements. Not only did they both die young, and from medical conditions that today might be successfully treated, but in both cases the more indirect causes of their premature demise can be related to the prevailing social attitudes of the day.

Prejudice against homosexuality led to Oscar's incarceration and subsequent physical decline. Constance suffered the consequences of being a woman at a time when the medical fraternity tended to blame neurological conditions on female physiology.

"Tragically, if Constance had been alive today, there would be every chance that her condition, while not curable, could have been diagnosed and appropriately managed," says Robins. "I would like to believe that medicine, the very discipline which failed her then, has also played a part in uncovering the truth behind both their deaths."

Story by Ambre Nicolson. Image of the Wilde family courtesy of imgarcade.com. Images of Constance and Cyril Wilde and Oscar Wilde courtesy of Wikimedia Commons.