More than a gut feeling: the good news and the bad about parasitic worms

Around a billion people living in the developing regions of sub-Saharan Africa, Asia and the Americas are infected with at least one type of parasitic worm. These worms – including hookworms, roundworms and tapeworms – collectively known as helminths, cause some of the most common infections in the developing world. Strikingly, they have probably co-evolved with us for millions of years since we first stood upright, and so have helped define how our immune systems function. However, our relationship with these worms is poorly understood, and far from straightforward.

On the one hand, helminths are disease-causing pathogens that directly contribute to significant illness, suffering and death in the developing world. On the other, immunological studies have found a range of potentially positive effects of helminth infections, including protecting against diseases such as diabetes, multiple sclerosis and respiratory disease. Therefore, the same infection has the potential to cause harm and also do good. Dr William Horsnell and his team in the Institute for Infectious Diseases and Molecular Medicine (IDM) are trying to unravel the complex effects of helminth infections on our health.

A recent study led by Dr Horsnell and Professor Adam Cunningham (University of Birmingham, UK), and published in PLoS Neglected Tropical Diseases, has shown that exposure to helminths led to a strikingly reduced control of non-typhoidal Salmonella (NTS) infection, and also reduced the efficacy of a new vaccine candidate against these bacteria. NTS is a devastating disease that kills tens of thousands of children every year in sub-Saharan Africa. At this stage, no licensed vaccine exists for NTS: understanding how new vaccines against the infection may work is therefore an important research question. 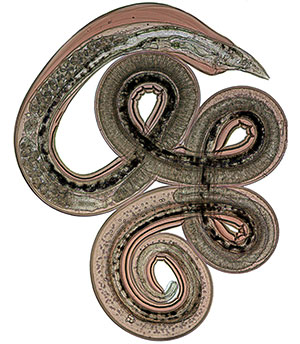 The authors note that many vaccination studies have not addressed how an unrelated infection (such as a helminth) might alter how a vaccine will work, and how any such effect could be overcome. This is particularly important, as it appears helminths might affect the success of many different types of vaccines.

To understand how exposure to a helminth infection influences immunity to NTS infection, the researchers infected mice with both salmonella and helminths. Dr Saeeda Bobat, from the School of Immunity and Infection at the University of Birmingham, who performed the majority of these experiments, noticed that a major feature of the impaired immunity was a reduction in the level of antibodies against salmonella in helminth-infected mice. This suggested that a prior helminth infection could result in lower antibody responses after infection or vaccination. This was indeed the case. Helminth-infected mice that were vaccinated subsequently had up to a hundredfold more bacteria than vaccinated mice that hadn't had a helminth infection. This suggests that vaccination might be less effective in populations that have more helminth infections. Fortunately, this study also showed that giving additional immunisations rescued antibody production, and protection could be restored. This will help plan how to use vaccines effectively in regions where helminths are prevalent.

What Bobat, Cunningham and Horsnell have shown in this study is that a helminth infection can have a dramatic effect on both the ability of the host to control an unrelated infection, and on the chances of a vaccine against that infection working. Importantly, the authors then go on to demonstrate that if health workers adapt their approach to vaccination, then helminth impairment of vaccine efficacy can be reduced. This discovery could have quite far-reaching consequences, because the age when children most commonly receive their vaccinations – at or before school – is also the age they are most likely to be infected with parasitic worms.

"This finding is particularly significant, as a greater understanding of the effect of helminths on immunity will help medical professionals to better understand how best to employ life-saving vaccines," says Horsnell.

Yet interestingly, the relationship between helminths and immunity is not always a negative one. A number of studies have shown that helminth infections can protect against a number of autoimmune diseases, such as inflammatory bowel disease, diabetes, allergy and respiratory infections. This appears to be achieved by the parasites inducing regulatory components of our immune system that prevent other damaging immune responses. As the majority of helminth infections we experience are harmless, it may be that the parasite induces these regulatory responses, so that our immune responses to them are weaker, thus allowing them to live in us. A beneficial side effect of this may be that these regulatory responses protect us from developing autoimmune diseases. 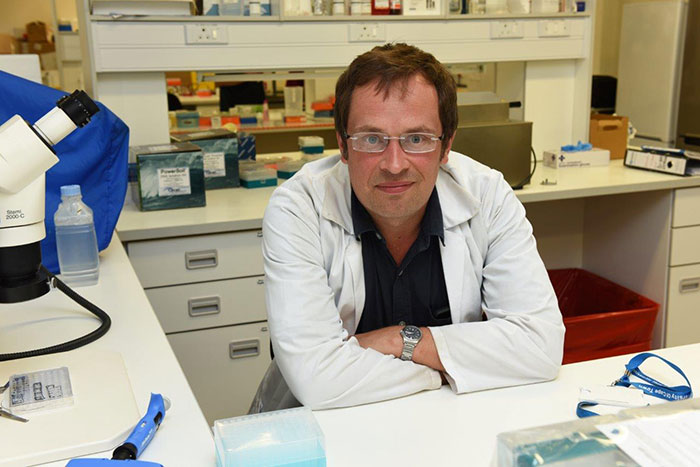 Horsnell's involvement in a separate study, RHINESSA (Respiratory Health in Northern Europe, Spain and Australia), has recently received World University Network (WUN) funds to explore the possible positive effects of helminth infections on allergy. This large collaborative study with (among others) Prof Cecilie Svanes (University of Bergen), Prof Vivi Schlunssen (Aarhus University) and Prof Rain Jogi (Tartu University) has been examining trans-generational effects on respiratory health in a study group, which has data and samples from as far back as 1940. One of the key outcomes of this study has been the high correlation between individuals who grew up on farms with low levels of allergy. This correlation, says Horsnell, may be related to increased exposure to helminth infections. (Read more about the WUN collaboration on the University of Bergen's web page.)

"We assume people in Europe no longer get a lot of helminth infections, which is probably true. But they may get more than we think, especially if they are living on a farm. Hopefully, this large-scale study will help to answer whether this exposure to helminths occurs, and more importantly, how it contributes to protection against allergy," he says.

Archaeological evidence has shown that helminths have infected humans for as far back as we can document: the eggs of intestinal helminths have been found in the mummified faeces of humans from thousands of years ago, and characteristic clinical features of helminth infections have also been identified in the writings of Hippocrates and in Egyptian medical papyri. Yet we still have a great deal to learn about the relationship parasitic worms have with us. What is apparent is that while helminth infections can make us ill, they can also have beneficial influences on our susceptibility to a range of important diseases. As scientists continue to grow their understanding of helminths, so the medical community can learn not only how better to protect us against the negative effects of parasitic worms, but also to understand how helminths can be used to protect us from disease. 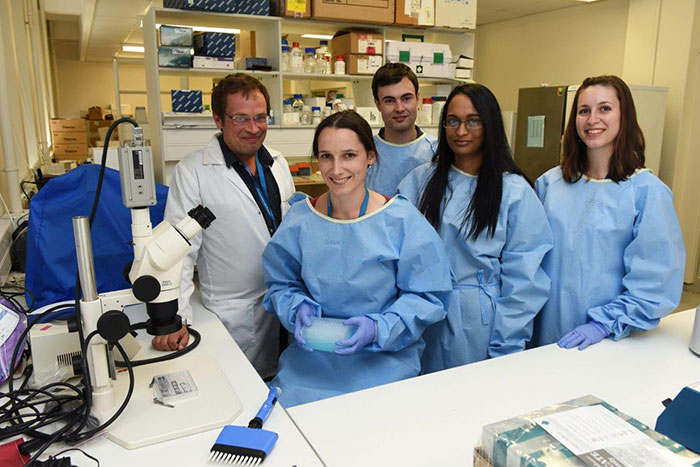 Story by Natalie Simon. Images of helminths by Claire Hoving. Images of William Horsnell and team by Michael Hammond.