Few are able to say they have helped to change the way rugby is played around the world, but this is something University of Cape Town PhD graduate James Craig Brown can claim with confidence.

Dr Brown's thesis evaluates the effectiveness of the BokSmart programme, a nationwide injury-prevention programme for rugby launched in 2009 by the South African Rugby Union (SARU). Ultimately, the programme aims to reduce the incidence of rugby-related catastrophic head and neck injuries in South Africa.

Through his research, Dr Brown (who graduated with a PhD in December 2014) found that the scrum engagement sequence in rugby was dangerous and needed to be adapted to increase the safety of the players. Dr Brown's research helped to contribute to a new 'crouch, bind, set' sequence in rugby when setting the scrum, as opposed to the previous 'crouch, touch, set' sequence.

The 'crouch, bind, set' engagement sequence requires props and hookers, who comprise the first row in a scrum, to bind onto (instead of simply touching) their opponents, after the referee has called "bind".

The front rows maintain the bind until the referee calls "set", when the packs engage – or more accurately, collide. The "bind" stipulation means that opposing packs hit each other from a shorter distance than before, thereby probably decreasing chances of traumatic neck injuries.

SARU first announced this change at the school and amateur rugby level in 2013.

Based on Brown and his team's identification of the most common injuries at the annual SARU youth weeks, the SARU medical department also drafted a 'minimum safety standards' document to make medical support teams aware of the most likely injuries, and how many they may need to deal with in a day.

Dr Brown's research found that after its launch, BokSmart was able to reduce catastrophic injuries in junior (schoolboy) but not senior (adult) players. The study also found that player behaviour had improved over this period. However, Dr Brown said that although there was a widespread positive response towards the programme, some coaches from high socioeconomic-status teams felt that the programme was a waste of time, as they perceived the risk of catastrophic injury to their teams to be negligible. 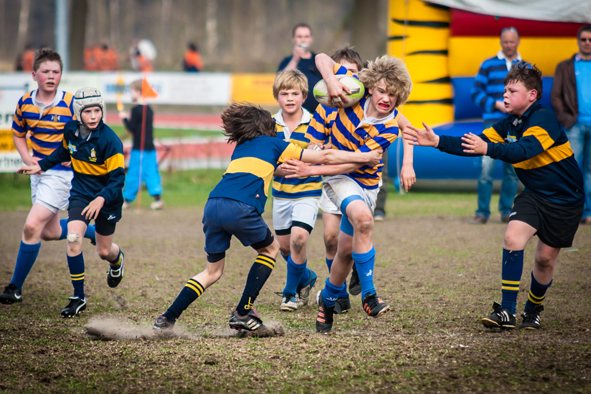 Having played rugby all his life, Dr Brown says he has a "huge passion for the game".

Wanting to complete a PhD that not only provided novel information to the world, but also had a direct application and improved rugby player safety led Dr Brown to his thesis: Safer rugby through BokSmart? Evaluation of a nationwide injury prevention programme for rugby union in South Africa. The thesis evaluation uses both quantitative and qualitative methods to investigate not only catastrophic injury rates over time, but also player behaviour and coach and referee perceptions of the programme.

Dr Brown obtained his BSc in Biochemistry and Physiology before obtaining his BSc (Med) (Hons) and MSc (Med) in Exercise Science from UCT. His PhD thesis was a joint project between UCT and VU University in Amsterdam, The Netherlands.

Dr Brown graduated on 20 December 2014, with a doctorate in Exercise Science from UCT's Science faculty.