Three UCT students were among 25 recipients of the Green Talents 2014 awards, internationally recognised prizes for young researchers focused on sustainability. The winners were chosen from among 800 applicants from more than 100 countries. It is the sixth time that these awards have taken place, under the patronage of the German Federal Ministry of Education and Research.

Nkulumo Zinyengere, a 28-year-old PhD student from Zimbabwe, regards winning as an honour and a challenge: "What the award acknowledges is potential. I therefore feel challenged to live up to the recognition by translating this potential into an actual contribution towards sustainable improvements in agriculture and food security in the region."

Zinyengere studies the farming practices of smallholder farmers in Southern Africa, looking in particular at their potential to adapt crop production to climate change. He remains motivated by his research's "potential to provide insights into practices that could help promote food security in vulnerable farming communities".

"I am a strong believer in Africa feeding itself through innovation in agriculture, so for as long as I can work towards making a contribution to this, I will be satisfied."

His experience in Germany was eye-opening, with the highlight being the Falling Walls conference at which UCT doctoral graduate Dr Dyllon Randall won third place. "Here [at Falling Walls] some of the most innovative scientific ideas and breakthroughs by young scientists from all over the world are presented. As a believer in the idea of science in service to society, I was inspired by how young scientists are contributing to solving everyday life challenges." 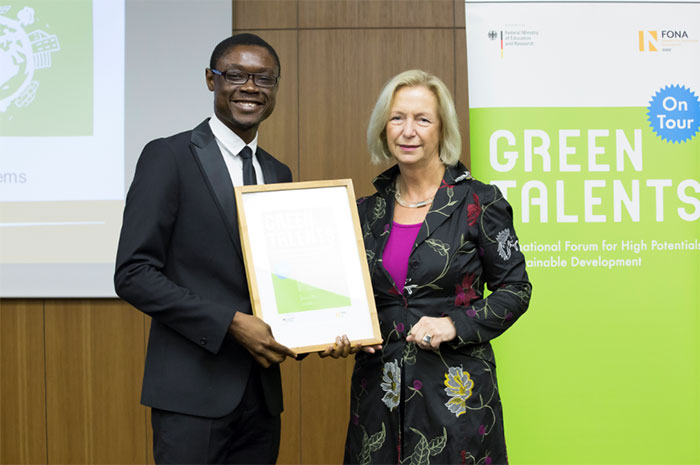 The Green Talents 2014 judging panel was impressed by Melissa Sikosana's academic achievement so early on in life (she is only 26 years old) and her "efforts to link scientific solutions to societal innovations".

A final year MSc student in chemical engineering, Sikosana's research is focused on nutrient and energy recovery from sewage. "I have always been fascinated by centuries-old rural African practices, which are often basic and sustainable. I believe that sustainable solutions lie within communities themselves, and the real challenge in Africa is aligning these solutions in terms of health, safety and functionality; making them not only more efficient but more effective," she explains.

She also believes her achievement has put her home country, Zimbabwe, and UCT on the global scientific radar: "This [achievement] demonstrates that the face of scientific research is willing to change. My research is at the interface between social sciences and engineering, and I feared that it would not be well-received. It is encouraging to see that this unconventional (and very relevant) scientific research, promoted by my supervisor Professor Harro von Blottnitz, is making waves in the global sustainability scene."

The prize included a two-week tour through Germany, where the winners visited top German locations for sustainability research. Winners were also offered a research stay in Germany of up to three months in 2015.

"Meeting with industry experts opened the door for discussion and collaboration. It was also interesting to learn that many developing (and some developed) countries are experiencing similar sustainability issues; hence, collaboration and cross-continental exchange is essential. On a personal level, it was great to travel and meet people from different countries, as well as learning about their cultures and aspirations. It refreshed my perspective on my research, and has given me the confidence to continue to question the effectiveness of current scientific methods towards achieving sustainable development." 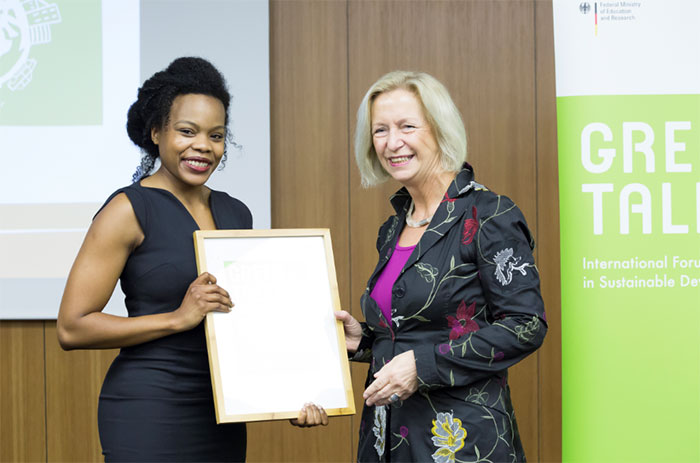 Lovanomenjanahary (Lova) Marline (27) is one of the first scientists to embark on a comprehensive study of Madagascan bryophytes, small non-vascular plants such as mosses, liverworts and hornworts.

Marline, who is from Madagascar, a global biodiversity hotspot, is doing her PhD on these plants: "Bryophyte ecology is a dynamic field with much to offer to our better understanding the importance of local and landscape-level processes in controlling biodiversity. Climate is the ultimate driver of species distributions at large [regional and national] scales. Some traits of bryophytes might make them less vulnerable to change in temperature, but many species are likely to be substantially affected by changes in humidity-related parameters."

The jury commended her for showing "great initiative and [breaking] new ground in the study of tropical bryology in Madagascar, working under difficult research conditions and being awarded both national and international scholarships".

Marline found the interaction with other Green Talent winners enriching. "It was an incredible experience. I have created new collaborations with bryologists and German specialists from the different institutions I visited. We also developed a large network of international young researchers, and very good friendships." 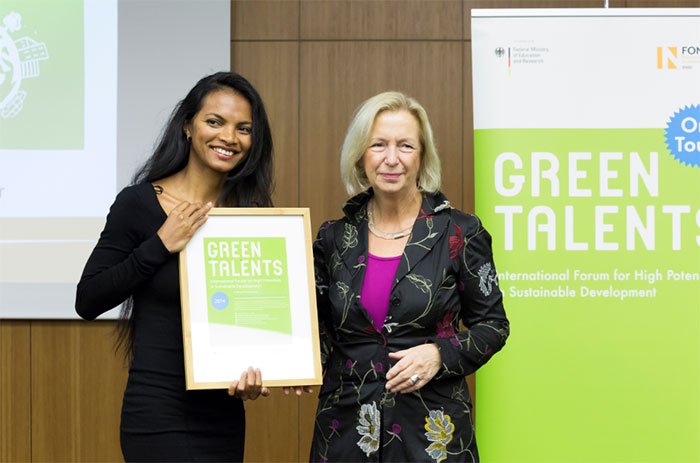 Lova Marline – seen here with German education minister Professor Johanna Wanka – embarked on one of the first studies on Madagascan bryophytes, a group of plants that include mosses, liverwort and hornworts.