Inclusive economic growth the antidote to poverty and inequality

This was the message from Sandile Zungu, the speaker at the commerce faculty's graduation ceremony earlier today. Zungu, who obtained his MBA and a degree in mechanical engineering at UCT, is also a company's executive chair and co-founder.

Zungu believes sustainable and inclusive economic growth to be the "catalyst and pivot around which the triple challenges of poverty, unemployment and inequality" can be addressed.

He started his speech by recalling his formative years in Umlazi, a township outside Durban and the third largest township in South Africa. "My loving parents – both working class, one a civil servant (a staff nurse) the other a factory worker – would never let us go to bed on an empty stomach. I personally experienced neither hunger nor poverty and was saved from the indignity of unemployment and its concomitant suffering.

"Notwithstanding my parent's heroism, they couldn't cushion me from apartheid inequalities ... My parents did what they had to do and for that I am eternally grateful, however one person's complex journey of success cannot be explained solely by faith or good parenting," he added.

According to him this growth can only be achieved if "South Africa's growth logic" changes. One of the ways this can be achieved is through an increase in exports. "Our credit as a country is maxed out and therefore we can no longer create internal demand. South African can only grow by servicing the world and competing in it. "

Ideas and courage will be needed in equal measure for such economic growth, said Zungu. "We need good ideas to upgrade the operating systems if our country is to be competitive in the world. And this will take courage as vested interest and traditional ways of doing business will increasingly be called into question."

Lastly sustainable, inclusive economic growth requires a shared and inclusive vision for South Africa. "We have to be explicit about our destination as a country. We cannot forget where we have come from and how far we have to go. Equity, justice and solidarity are part of our DNA as a nation and we have to proud of that," he concluded.

The first of two Social Responsiveness Awards was presented to Stuart Hendry, director of the commerce faculty's Development Unit for New Enterprise (DUNE) and co-founder of the Southern Africa Sustainable Development Initiative (SASDI). The award was in recognition of SASDI's Starting Chance campaign, which aims to transform 30 shack-based crèches into formal centres of excellence for early learning development. Hendry's involvement is not restricted to SASDI as he serves on the boards of other NGOs and has over the past five years also led his postgraduate students in raising more than R300 000 for various charitable projects. 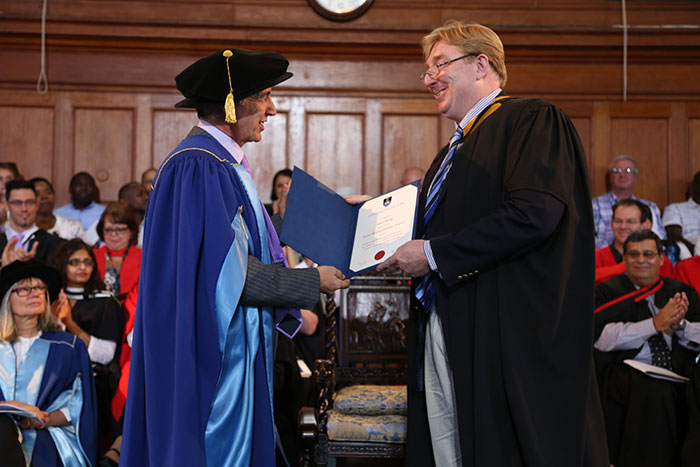 Stuart Hendry, co-founder of SASDI, won the Social Responsiveness award for his work in addressing the needs of communities outside of UCT.

Story by Abigail Calata. Images by Je'nine May.