Guard the lamp of knowledge

Building a research enterprise on equipment scavenged from dusty corners of medical school may not have been a dream start to his career as a neuroscientist. But for honorary graduate Prof Rodney Douglas, it was this spirit of enterprise and exploration that paved the way for him and other UCT alumni to become neuroscience pioneers.

"So, even though we may have a relative lack of resources, the training and exploratory spirit of UCT is able to make a world-class impact on science and society," Douglas said in his address shortly after UCT conferred a DSc (honoris causa) on him.

An emeritus professor at the Institute of Neuroinformatics at the Swiss Federal Institute of Technology and the University of Zurich, Douglas was speaking to the mostly postgraduate students at a combined Faculties of Law and Health Sciences graduation ceremony at 14h00 on 16 December.

He continued: "Indeed, I believe that we gain advantage through being leaner and hungrier than our colleagues at more well-endowed institutions.

"That fledgling neuroscience lab, with its avant-garde interest in computers, automated data collection, and neural computation, gave rise in a few short years to half a dozen essentially self-taught neuroscientists whose abilities and innovative methods took them quickly to positions at Cambridge, Oxford, Harvard, Caltech, the University of Maryland, the Weizmann, Max Planck, Illinois, and the Swiss Federal Institute of Technology."

All had become leaders in their field, he said.

"For example, one of the largest neuroscience projects of all time, Europe's €1-billion Human Brain Project, is now lead by a student [Professor Henry Markram] from that little lab at medical school, with its charming view of wildebeest trotting in the tall grass of Devil's Peak."

Douglas' scientific quest has been two-pronged. In neuroscience he has tried to understand the nature of computation in the neuronal circuits of the neocortex, the region of the brain that is crucially involved in intelligent behaviour. Second, through neuromorphic engineering he has applied that knowledge to the development of novel electronic technologies for brain-like computation.

And though he has made many "satisfying advances", he said has yet to solve the central scientific questions that have driven him all his life.

"It's important for young postgraduates to recognise that this essential lack of closure in our understanding is the very nature of the scientific quest, both in mythology and also in reality."

Safeguard the lamp of knowledge

Douglas said it was the collective journey rather than individual ends that fuelled the growth of human knowledge.

"So it is together that we must tend the lamp of knowledge that is symbolised, in chief, on UCT's coast of arms."

But that lamp had to be guarded, he said, because knowledge and it application were not always for the good of humankind.

Citing the example of the museum and library at Alexandria, which had engendered knowledge and progress, and which had been crushed by bigotry and Roman militarism, so conflicting ideologies and religions posed a similar threat today, he warned.

"Now again, we live in an age of dramatic growth of knowledge and spectacular technological progress. And again, ideologies, religions and militarism grow. The responsibility rests with all of us to ensure that in these exciting but unstable times we tread vigilantly and with integrity, to ensure that the lamp of knowledge is not again extinguished.

"But UCT has ensured that you, its graduates, are equipped to do well in this task. It now remains for you to do good."

Three other highlights marked the afternoon ceremony. The first was the official conferral of a UCT Fellowship on Emeritus Professor Clifford Shearing of the Faculty of Law. Shearing, who holds the South African National Research Foundation Chair in Security and Justice at UCT, is a distinguished scholar in the field of security governance. 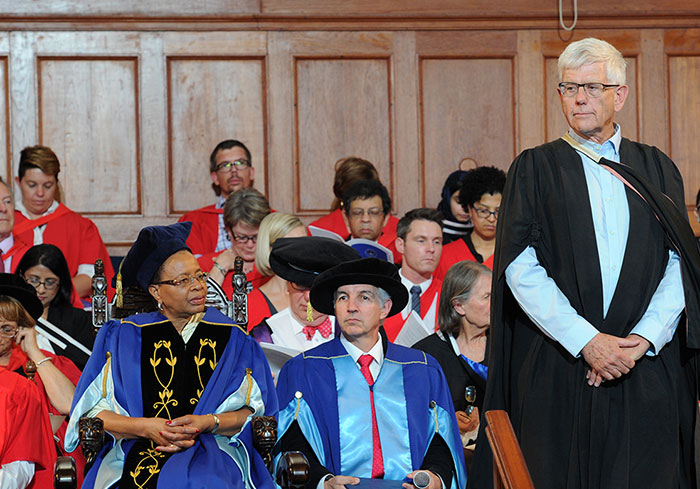 Creative endeavour: Emeritus Professor Clifford Shearing of the Faculty of Law was nominated as a UCT Fellow for his sustained and original contributions to research, specifically in security governance.

The second was the award of the President of Convocation Medal for 2014 to William Pick, an honorary professor in the School of Public Health and Family Medicine at UCT and a medical graduate whose life and work have been devoted to improving healthcare for all South Africans. In her citation, President of Convocation Mary Burton lauded Pick for his distinguished leadership in public health. 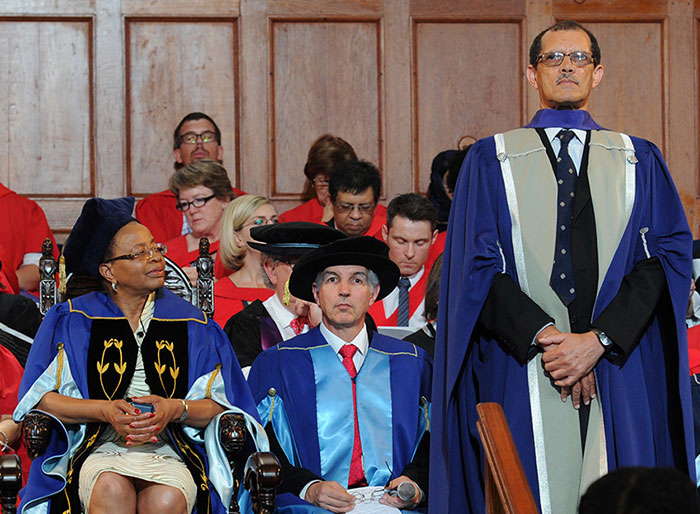 Common good: Alumnus Honorary Professor William Pick received the President of Convocation Medal for 2014 for his dedication to improving healthcare for all South Africans.

Third was a 're-graduation'. Many UCT alumni who were marginalised during the apartheid era chose not to graduate. This year, UCT invited these alumni to 're-graduate' and among those who took up the invitation was Margot Emanuel (BSc [Hons]; MSc [Med]). Emanuel completed her last degree at UCT in 1992. She now lives in the UK. 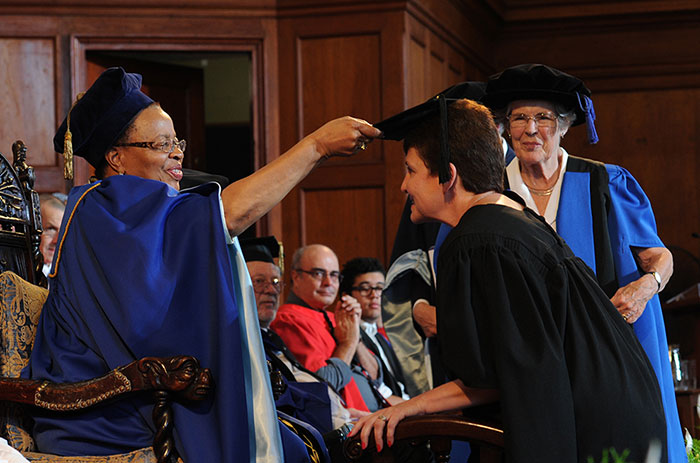