The plight of LGBT patients

The climb toward equality continues in the lesbian, gay, bisexual and transgender (LGBT) community. In a short audio segment that was broadcast on public radio in the US, postdoctoral research fellow Dr Alexandra Müller chronicles the plight of LGBT patients in South Africa's healthcare arena.

Listen to the Academic minute

Analysing the experiences of lesbian, gay, bisexual and transgender patients in health care
(click to play)

About the Academic Minute

The Academic Minute features researchers from colleges and universities around the world, drawing experts from top research institutions and keeping listeners abreast of what's new and exciting in the academy. It airs on WAMC, a public radio station in the US, featuring a different academic each weekday at 7:34 am and 3:56 pm, and is syndicated to 68 other stations throughout North America. Each podcast is posted on Inside Higher Ed.

Historically, health systems have been antagonistic toward lesbian, gay, bisexual and transgender (or LGBT) people: until 1972, the American Psychological Association considered homosexuality a mental illness, and psychiatrists prescribed electroshock therapy as a 'cure'. Even today, many LGBT people remain wary of health professionals. Yet discrimination and social exclusion render LGBT people more vulnerable to ill health: recent studies have shown that people who identify as LGBT are more likely to be depressed and to attempt suicide.

Even though the South African constitution guarantees LGBT people protection from discrimination, most people I interviewed have received suboptimal health care, and recounted experiences of homophobia and discrimination from nurses and doctors. Often healthcare workers let stereotypes and personal prejudices overshadow their professional obligation to provide non-judgmental care. LGBT patients were ridiculed or even refused services, and as a result avoided seeking care in future.

Many healthcare workers also lacked knowledge about LGBT health. I interviewed lesbians who were turned away from HIV tests because nurses did not think they were at risk for the virus. Yet women who don't conform to gender norms face high levels of sexual violence and are thus at high risk of HIV. There is also the widespread but erroneous belief that sex between two women carries no risk for sexually transmitted infections.

Analysing LGBT patients' experiences pointed me to crucial gaps in the education of health professionals. As a result, many may choose to do without the professional health care they need. Although my research is based in South Africa, such experiences are likely to resonate with LGBT people worldwide. 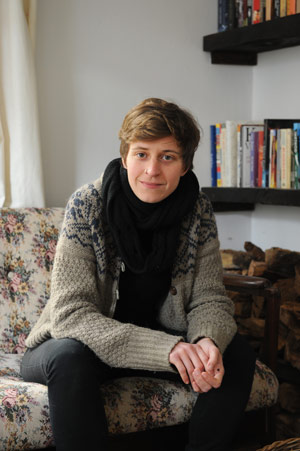 Dr Alexandra Müller is a postdoctoral research fellow in the Health and Human Rights Programme, Division of Public Health Medicine in UCT's School for Public Health and Family Medicine. She qualified as a physician and also received her Dr. med. in Medical Psychology and Medical Sociology from Georg-August-Universität Göttingen, Germany. Dr Müller's research centres broadly on sexual and gender minority health and the health rights of other vulnerable groups in South Africa, where she has lived for the last several years.

More specifically, her research explores the experiences of lesbian, gay, bisexual and transgender (LGBT) people in the South African public health system, and pioneers pedagogical approaches to integrating critical theory into the curricula of South African medical schools and nursing colleges. Her interdisciplinary research has been published in various academic journals. She has also authored numerous publications aimed at the general public, including the first South African sexual and reproductive health guides for transgender people and their primary care providers. Dr Müller's aim is to improve health care for LGBT and other vulnerable people in South Africa and beyond, through applied research and through partnerships with civil-society organisations, academics and government representatives.

This audio segment was originally carried by the Academic Minute on 27 October 2014. Health care photograph sourced from the World Bank under Creative Commons 2.0 license.