Birds on Gough Island under threat from mice

Unlike the farmer's wife of the popular nursery rhyme, desperate biologists are looking for much more than a carving knife as they combat an infestation of mice to save Gough Island's status as the world's most important seabird island.

This is because the birds on this proclaimed World Heritage Site deep in the southern Atlantic Ocean are under increasingly severe threat from the common house mouse, introduced accidentally by sealers during the 18th and 19th centuries, which has since started preying on the birds.

Last week, field biologists returned from Gough with horrifying new evidence of mice predation on live seabird chicks in their nests, including the critically endangered Tristan Albatross, which breeds almost exclusively on this 65km2 British possession.

Of equal concern are the millions of petrels (another bird virtually confined to Gough Island) that breed on the island in underground burrows and caves.

Field biologist Ben Dilley installed infrared cameras in 10 Atlantic Petrel nests during his past year on the island, and was shocked to find that mice had killed every chick within 12 hours of hatching.

In one case the mice pulled a hatching chick from its shell while it was still being incubated. 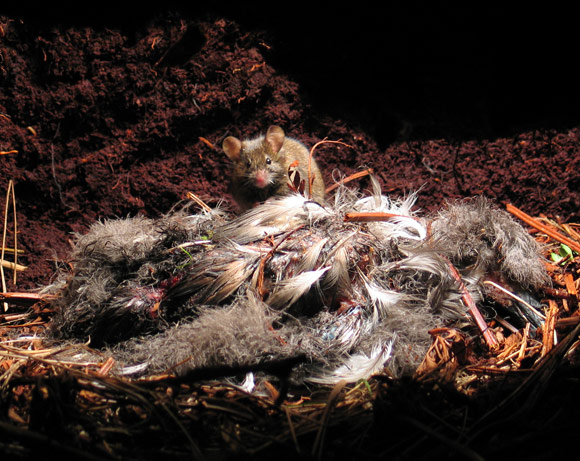 Dubbed 'supermice', the rodents that are threatening the survival of birds on Gough Island are twice the size of the common house mouse in Britain.

"Each year we visit the island, we see the numbers of birds dwindling. Clearly something has to be done," says Professor Peter Ryan, director of the UCT's Percy FitzPatrick Institute of African Ornithology.

The first hard evidence that the mice - dubbed 'super-mice', because of their size (they are twice the size of the common house mouse in Britain) - were preying on seabird chicks was produced by husband-and-wife team Andrea Angel and Ross Wanless, then FitzPatrick ornithological students, while working on Gough Island in 2003/4.

They recorded gruesome photographs showing that during winter, when other food such as seeds and invertebrates is scarce, the mice attack albatross chicks, eating them alive while they sit helpless on their nests.

The mice also attack chicks of other species, such as petrels and shearwaters in their burrowed nests.

The situation has since been closely studied by seabird biologists who monitor the island's populations of albatrosses and petrels.

The status of the Tristan Albatross is of particular interest, because apart from a couple of pairs on Inaccessible Island in the Tristan archipelago, Gough is the sole breeding site for this critically endangered species, Ryan explained.

One of the main tasks during the annual relief voyage to Gough from South Africa is to count the Tristan Albatross chicks across the entire island, to assess the year's breeding success. 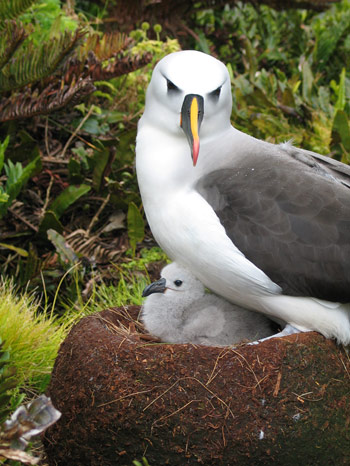 During winter, the mice attack seabird chicks on their nests, eating them alive.

This year, the results were dire, with only 163 chicks counted - less than 10 percent of the number of eggs laid. Large albatrosses should raise chicks from 60 to 70 percent of breeding attempts. This year has been the worst since complete island counts started in 1999.

Over the last 15 years, chick production has fallen by more than 80 percent, Ryan said. Field biologist Delia Davies, Dilley's partner - who also returned aboard the SA Agulhas 2 after a year on the island - said it was "astounding" that an albatross chick weighing up to 10kg could be killed within a few nights by mice weighing less than 50 grams.

"As usual, the north of the island was particularly hard hit, but we weren't prepared for the magnitude of the impact there. In the lower-lying areas of West Point and GP Valley, only two chicks survived out of more than 400 breeding attempts," she said.

Ryan said the status of the petrels was of equal concern, because these birds left their chicks alone within a few days of hatching. "And those that breed in winter are especially vulnerable, because that is when the mice have few other sources of food."

A study to determine the feasibility of eradicating mice by using helicopters to drop poison bait over the entire island (led by the Royal Society for the Protection of Birds, the UK BirdLife partner) concluded that such an attempt would be likely to succeed, he said.

Ryan pointed out that mice, rabbits and rats were recently eradicated from Australia's Macquarie Island, also a World Heritage Site, which is almost twice the size of Gough.

"We can only hope that the UK acts swiftly to restore Gough, allowing it to reclaim its title as the world's most important seabird island."