While little can be done to curb the current outbreak of Ebola in Africa, when the next outbreak happens, the world will be armed with cheap but powerful biologics made using plants, says UCT plant biotechnologist Professor Ed Rybicki.

Recent news from the BBC is the World Health Organisation reporting that a serum made from the blood of Ebola survivors could be made available in Liberia within weeks.

Liberia has been hardest hit by Ebola deaths, followed by Guinea and Sierra Leone, and the US Centres for Disease Control and Prevention estimates that cases in Liberia and Sierra Leone will rise dramatically by January 2015.

The WHO's Dr Marie-Paule Kieny says trials for two promising vaccines could produce initial results by the end of the year.

Worldwide, governments have been on high alert to halt the spread of the disease, spotlighting the need for emergency vaccine technology: vaccines that can be made quickly, cheaply and safely.

And biologics - drugs that can be created by genetically re-engineering plants, or even plant viruses, to produce vaccines and antibodies needed to curb diseases such as Ebolavirus - could be the answer.

Biologics are not new, says Rybicki, a genetic engineer who heads up UCT's Biopharming Research Unit (BRU), but they are the latest growth area for pharmaceutical companies, and part of new approaches to disease prevention.

And plants such as the humble tobacco plant are key.

Vaccine antigens, substances that provoke an adaptive immune response, can be made in plants. These antigens treat a host of diseases and cancers by mimicking proteins and other molecules found in disease-causing organisms, and eliciting protective antibodies in the human body. It's also possible to make therapeutics to treat rare genetic diseases: for example, the now-licensed biologic Elelyso, used to treat Gaucher's disease, is made in carrot cells.

Recently, however, worldwide attention has focused on making therapeutic monoclonal antibodies in plants. These plant-made antibodies, or 'plantibodies', are completely safe for humans and will pave the way for low-cost therapeutics - and will change the way we treat viral and other diseases, adds Rybicki.

"You can make a complex vaccine in plants that's as good as a conventional vaccine," he said in a recent TEDxCapeTown talk.

It's technology that's been incubating at UCT since the 1980s. 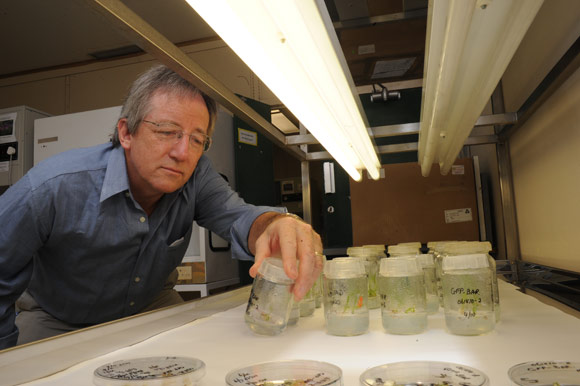 UCT's Biopharming Research Unit (BRU) was founded from the Subunit Vaccine Group that developed from the plant virology laboratory started in the 1970s. Rybicki has been at the helm since 1985.

Since then, he and his team have collaborated with organisations in and outside the country on (mainly human) viruses of 'vaccine interest'. In 1999 they became part of two big local vaccine development consortia: the South African AIDS Vaccine Initiative (HIV-1 subtype C), and a project on novel vaccines for human papillomavirus, the cause of cervical cancer.

"We've succeeded in establishing a first-world technology in a developing country, where many of the proponents of the technology claim to want to see it used."

While transient expression technology can produce antigens or antibodies in tobacco leaves in just a few days, and harvesting and processing them takes just a few more, the scale of production for therapeutics in particular can be huge, and the processing facilities very expensive; largely beyond African resources.

Charles Arntzen of Arizona State University, the plant biologist who helped establish the 'plantibodies' technology, points out it takes 30 to 50 kg of tobacco leaves for a single course of ZMapp, the US-Canadian experimental therapy antibody-based drug for the Ebolavirus, and four to six months to produce clinical-grade medicine.

The clinical-grade batch of ZMapp, manufactured by San Diego-based Mapp Biopharmaceutical, was tested on macaque monkeys. A recent article in Nature reported that of the 21 macaque monkeys infected with Ebolavirus, the 18 that lived had received three doses of ZMapp (the three that died received none).

"But we don't know whether it works for humans, because we haven't had a full-scale human trial," says Rybicki.

Ebola haemorrhagic fever, assumed to be carried by bats, first appeared in the Democratic Republic of Congo and Sudan in 1976, in the DRC again in 1995, and several times since; however, these outbreaks have all been small compared to the current West African epidemic. 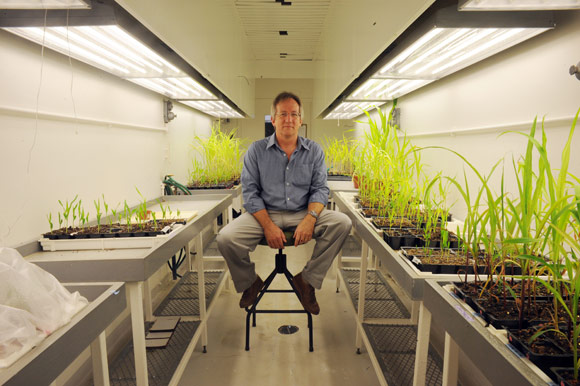 It was the 1995 Kikwit epidemic in the DRC that grabbed Rybicki's attention and fuelled his interest in the field - largely because he was able to use an honours student's essay on emerging diseases, plus daily updating from various sources, to provide some of the only reliable information on Ebola on the then-very-new World Wide Web.

'It kills up to 90% of people it infects and is highly unpredictable, popping up wherever it feels like it, from West Africa to the southern Congo to Uganda; and it also hits healthcare workers.'

A recent news report said that ZMapp could be made somewhere in Africa, and that South African officials had been in talks with US officials and the manufacturers of ZMapp to develop a facility here.

'We most certainly have the expertise and research infrastructure to support a facility,' Rybicki was quoted as saying. 'Trouble is, it needs to be built.'

While the technology produces drugs faster and more cheaply than traditional methods, it's not as simple as mixing it up in a laboratory - certainly not in the case of a potential Ebolavirus vaccine.

Vaccine development is not only about emergency situations; it's also about capacity building.

And then there are initiatives to curb the silent killers, such as cervical cancer.

Earlier this month the BRU joined forces with the Canada-based biopharmaceutical company Medicago to develop a vaccine against human papillomaviruses (HPV), which cause cervical cancer.

Having perfected their 'biofarming' process over many years, the UCT unit was the first group worldwide to produce significant amounts of human papillomavirus protein in plants, Rybicki added.

In fact, the unit's new name reflects this shift from basic virology and vaccine research, towards more applicable research to produce 'farmed' human and animal therapeutics in plants.

Aside from HPV, BRU has also worked on human immunodeficiency virus (HIV), and avian and human influenza; as well as animal viruses such as bluetongue virus, the beak and feather disease virus in parrots, and enzymes of interest to diagnostic kit makers.

"Because the main advantages vaccine farming have over conventional production are the speed of response and the extreme scalability of production, it should initially be used for 'niche' products such as emergency response vaccines and bioterror response vaccines," says Rybicki. "This is because a short response time is vital in responding to unexpected outbreaks or incidents, and scale of production essentially depends only on how many plants are available, or needed, rather than on expensive and hard-to-expand fermentation facilities.

"Thereafter, and only when the products have become established in terms of acceptability and efficacy, it's likely that the major niche would be in biosimilar or generic production, where the lower cost of material in large-scale production would become a major factor in determining economic viability," he wrote in a co-authored Human Vaccines paper in 2011.

Since Ebola has been on the radar since the 1970s, why has it taken so long to produce a vaccine and medicines?

"It's worth remembering that in the years between the first outbreak of Ebola in 1976 and the next in 1995, only a few labs worldwide were working on Ebola," Rybicki explains.

"And they were mainly in the Soviet Union and the US, and they were doing it because of the bioterror or biowarfare potential of viruses such as this."

Recently Russia announced it was working on three new Ebolavirus vaccines, and hoping to produce them in the next six months.

But while Ebola continues to dominate headlines, perspective is needed, says Rybicki.

"The number of people who've died over the recorded history of Ebola is less than the number who die of influenza every year: up to 400 000 worldwide, 40 000 of them in the US alone. While this may change - and we hope it does not - it is as necessary to have cheap vaccines for influenza and other diseases of low-income populations as it is to have Ebola vaccines. We hope we can help to provide them."