Rarer than rhino and just as prized by poachers

Critically endangered cycads are disappearing from the wild and from botanical gardens, ripped up by the roots to feed the lucrative landscaping market. UCT researchers are using a novel method to help the Hawks combat the theft of these ancient plants.

A method that has been used to trace cocaine, explosives and bank notes is being applied for the first time to help combat the illegal trade in cycads. In a paper published this week in the Journal of Forensic Sciences and reported on in Nature, Kirsten Retief and colleagues at UCT and the South African National Botanical Institute (SANBI) describe their use of stable isotopes and radiocarbon dating to identify cycads removed from the wild.

Cycads are the world's oldest seed plants '“ they have existed for 340 million years '“ but they are also the most endangered plant group on the planet. South Africa is home to 38 indigenous cycad species, and is therefore an important centre for cycad diversity; however, 12 of those species are critically endangered, and three of them are classified by SANBI as extinct in the wild.

There are fewer than 100 cycads of the species Encephalartos latifrons left in the wild: it is this species that was targeted by thieves in two separate raids at Kirstenbosch National Botanical Garden in Cape Town in August. The poachers stole 24 cycads, a haul worth more than R700 000.

"It was a very well-orchestrated operation," says uPhakamani Xaba, senior horticulturist at Kirstenbosch. "It was a rainy night on both occasions. They knew exactly which plants they were targeting '“ they even went for female plants, which are normally worth more than male plants." Some of these slow-growing plants had been nurtured in the Kirstenbosch nurseries for 20 years and were only planted a year or two ago.

Thefts like these pose an urgent challenge to those charged with protecting South Africa's cycads. Kirstenbosch has ramped up its security in the wake of the two raids, but plants in the wild remain extremely vulnerable.

"These plants sell by the centimetre," says Dr Adam West, senior lecturer in UCT's Department of Biological Sciences and lead principal investigator on the project. "A large, rare plant will sell for around R400 000. When you put a price tag like that on a plant, there's an incentive."

Trading in these endangered cycads is illegal '“ banned by the Convention on International Trade in Endangered Species of Wild Fauna and Flora (CITES) '“ but enforcing the law relies on the ability to prove that a cycad in someone's garden came from the wild.

A range of techniques has been used in the war on poachers, including microchips and micro-dotting: spraying the plants with 100 or more miniscule dots, each of which contains an individualised reference code. However, neither of these methods is foolproof. Poachers have taken to x-raying plants and digging out the microchips, and both methods rely on going into the wild and tagging each plant at risk.

"SANBI approached us for help in developing a technique to trace cycads that showed up in suspicious locations where they'd never been seen before," says West. "Cycads have very localised distributions, so we can characterise their environment relatively well using stable isotope composition."

The researchers can take tissue out of the stems of cycads at different points and link it back to its original location. "There's a lovely chronology in these plants," says West. "The more recent tissue will reflect the chemical signature of the current location, whereas further down the stem the stable isotope composition of the tissue can be linked back to the wild."

When plants turn up in suspicious locations, UCT researchers turn detective. Kirsten Retief, a researcher with both UCT and SANBI, and MichÃ¨le Pfab, scientific co-ordinator at SANBI, have accompanied the Hawks and the Green Scorpions on raids in Gauteng. "I've been to a number of private gardens where the owners of cycads claim they are legitimate, and yet you can see burn marks and porcupine bites on them," says Retief. "Our method will test their stories."

"The advantage of this method," explains West, "is that the signature has been locked up in the plant's tissue, and you can't get rid of that. It's not like a microchip, which you can pull out. It's not like a DNA marker, which tells you about parentage but doesn't tell you about origin. And it's not like most methods where you have to go into the wild to label the plants - we can trace these plants without having seen them before."

There is a great sense of urgency, he says. "When we go out into the wild to survey some of those populations, we go to locations where they were, and there are just holes in the ground. These plants are disappearing from the wild over timeframes in the order of weeks and months, not years." 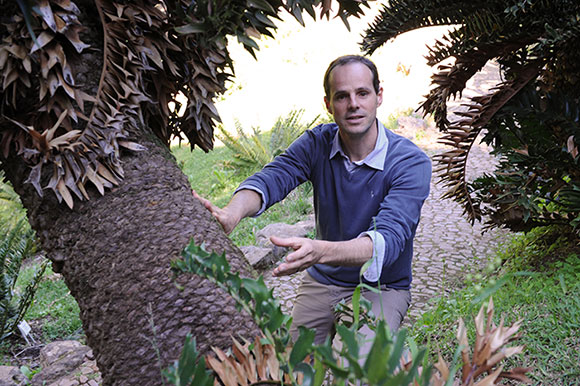 "The signature is locked in the plant's tissue": Dr Adam West of the Department of Biological Sciences explains the advantages of the method he and his team have developed to track cycads. Photo by Michael Hammond.