How far have we come since 1994? Deputy Minister of Public Works Jeremy Cronin challenged national narratives of change, growth, redistribution and reconciliation at the Department of Philosophy's Social Equality Conference in August.

It was telling that the front cover of Mayibuye, the African National Congress (ANC) journal from 1991 to 1998, triumphantly proclaimed 'free at last', but not 'equal at last' after Nelson Mandela was inaugurated as South Africa's first democratically elected president in 1994, said Jeremy Cronin, national Deputy Minister of Public Works.

This was because liberty was a state, while equality was a process, and political liberty from apartheid did not mean that everybody was finally equal, Cronin argued.

Cronin was speaking at a special session on inequality in South Africa on 15 August, as part of a three-day conference on social equality organised by UCT's Department of Philosophy. The conference featured a range of speakers exploring philosophical approaches to equality and inequality - all taking advantage of the fact that the philosophical debate about equality has become increasingly nuanced, concrete and empirically informed in recent years, organisers explained.

Call it what you may

Mayibuye's editorial, Cronin reported, was not quite sure what to call South Africa's democratic moment - was it 'liberation', 'real change', or 'national democratic revolution'?

"Call it what you may," resolved Mayibuye.

"What the editorial of Mayibuye should have said was that this democratic breakthrough and the inauguration of the new president had brought elements of freedom and elements of greater equality, if you wanted to use those words," said Cronin, who lectured in philosophy at UCT in the 1970s. "[It should have said that the democratic moment gave] more capacity to South Africans, but a long road to travel. It doesn't do that. It celebrates an event, a moment, and hypes it up terribly, and then drops it off the cliff, as it were."

Cronin's address, titled The Bigger the Cake? Jobs, growth and equality, challenged some fundamental post-apartheid discourses - from the notion of justice as redistribution only, to the post-1996 policy that privileged economic growth over redistribution.

South Africa's National Development Plan 2012 (NDP) called for the "pie" to be grown so that there would be more to share, for instance. Growth was measured by a country's gross domestic product (GDP), but Cronin pointed to growing criticism of GDP's usefulness as a measure of development.

For one, money spent on gambling and education were weighted the same.

Cronin used Working for Water, a programme run by the Department of Public Works, as another case in point.

"People on small stipends of R71 a day are trained and then work to clear invasive aliens, and the figure quoted is something like 'R400 billion worth of water in a water-scarce country has been saved', 'Two million hectares of grazing territory - 71% - has been rescued from irreparable damage', and so on.

"That doesn't count. What does count in the GDP is the R71 paid to the participants."

So the battle of what growth [is], what we value and why we value it, is a big one, Cronin said.

"Unfortunately, part of the discourse in South Africa, in trying to move from 1994 to better social justice and equality and so forth, is compromised by the notion that we must just grow the pie, and the measurement of a growing pie is GDP. Hugely problematic."

The escalator of redistribution

As for limiting the idea of justice to redistribution, Cronin cautioned that this would condemn South Africa's "productive economy" to continue working within the exploitative structure imposed by apartheid. The apartheid economy and the creation of Bantustans were largely a response to a crisis in the mining industry, argued Cronin, with the former homelands seen as reserves of cheap labour to service the economy.

"So what the redistribution state of which I'm part does is – it's been redistributing quite significantly since 1994: three million free houses, basically for the poorest of the poor (not all of them, because the queue is endless), 60 million social grants.

The people who received these three million houses and social grants are largely still confined to "the same distant locations, same faraway places, dormitory townships", as under apartheid.

Another "re-word" that Cronin challenged was 'reconciliation', as exemplified by the Truth and Reconciliation Commission. "[It] implies that we will reconcile, rather than calling for a construction of conciliation," says Cronin.

"All of these 're-words' tend to pull us in a direction which I think has hampered an understanding of what we're trying to do, and [of] how to achieve social justice."

Time cut short the conclusion of Cronin's address, but delegates also applied their minds to a range of other talks, including keynotes by Professor Charles W Mills of Northwestern University, who spoke on racial equality; Professor Miranda Fricker (University of Sheffield) on epistemic inequality; and Professor Jonathan Wolff (University College London) on social equality and relative equality.

"It would be naÃ¯ve to think that philosophy on its own could do anything to alleviate inequality," said the conference organisers. "But it does have a role to play. Philosophy can articulate the various different forms of social inequality. By arguing for a particular conception of justice or the good life, it can show what is wrong with some or all of these forms of inequality." 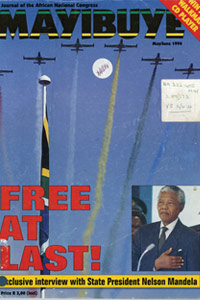 Story by Yusuf Omar. Photo by Je'nine May.