Transformation is a challenge for all South African higher education institutions. In response to recent discussions on this important topic in the media, UCT Vice-Chancellor Dr Max Price outlines what UCT is doing to advance employment equity.

Professor Xolela Mangcu, one of UCT's significant public intellectuals, attacks UCT's new admissions policy by extrapolating from some shocking statistics on the paucity of black academic staff at UCT. (Ripping the veil off UCT's whiter shades of pale, Sunday Times, 6 July 2014). There is no disagreement between us on the lamentable lack of demographic transformation amongst senior academic staff. Yet he does not make any argument that connects the one with the other and if I had space I would demonstrate that the factors underlying the staff demographic profile are quite distinct from the student profile and have no bearing on the admissions policy.

Nevertheless, it is very much in the public interest to understand the challenges of employment equity in academia.

Although Mangcu presented the employment statistics as if they were exposÃ©s, these are not revelations to the University leadership. These data are our own research; we publicise and submit them in annual reports; we agonise about how to address the problems; and, contrary to Mangcu's dismay that his colleagues do not speak out against inequality, thousands of hours are spent by his colleagues in various fora tackling the problem.

Mangcu implies that the reason for such embarrassingly low numbers of black professors is racism at UCT, referring to discrimination against black academics in the 1950s and 60s evidence. Yes, there was racism in many aspects of university life. But it is a tendentious rewriting of history to deny UCT's many challenges to the apartheid system, its reputation with the security police as "Moscow on the Hill", its successful manipulation of the notorious ministerial permit system to admit black students to UCT when they were denied access to whites-only universities. Thus it is a superficial argument that simply blames historic endemic racism at UCT as the root-cause of failed transformation particularly given much greater degrees of racism and collusion with apartheid at most other universities and technikons.

Here is UCT's analysis of the problem. It generally takes more than 20 years from getting a PhD to becoming a professor. The pool of South African black academics available for appointment to professorship in 2014 is a proportion of the pool of black PhD graduates in 1994. Given our history, this was a very small pool. Few in that small pool chose academic careers over offers from the new government, civil service and corporates, all desperate to recruit highly skilled black professionals.

So this is not a UCT problem '“ it is a national university sector problem. The table makes the case eloquently. 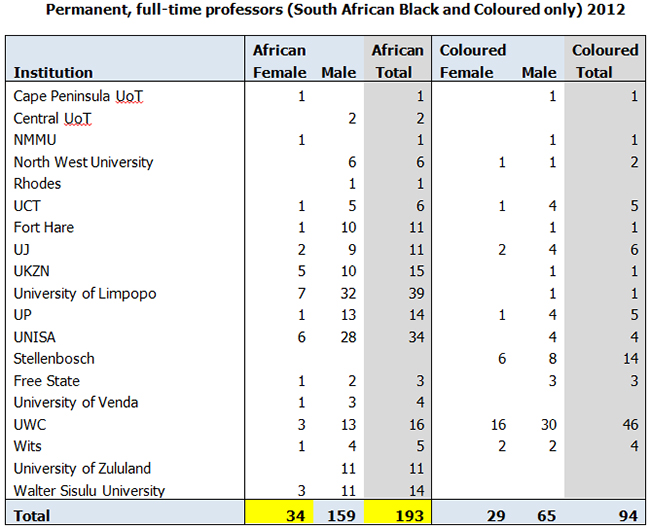 Mangcu makes much of UCT having no African women professors (though we had one in 2012). If we exclude UNISA (which accounts for about 30% of all students nationally with staff primarily involved in distance education), there are 28 African women professors in the whole country. Spread across 22 universities, it isn't surprising that seventeen have either none or one.

Regarding total numbers of African professors, these are low all-round. Only eight universities have more than UCT. The relative size of universities is also a factor. UKZN, UJ, North West and UP are around twice the size of UCT with twice as many staff. Only three out of 23 universities, including UNISA, have more coloured professors than UCT. Clearly this is a national problem that we must tackle together without mud-slinging.

What are we doing for employment equity at UCT?

We are not lowering the standard for appointment or promotion as professor for people of colour. This would reinforce racial stereotypes and sets transformation back. It is the exposure to black professors who are in every way as distinguished as their white colleagues that changes mind-sets - black and white alike.

We nevertheless have a strenuous employment equity policy. At professorial level this may lead to selecting a black applicant who meets the appointment criteria over a stronger white one. At junior levels, this leads to consideration of potential, not just achievement, with a commitment to developing that potential. The criteria and qualifications for every job are reviewed to see if we might be able to appoint someone at a lower level than professor if there are no professorially eligible black candidates. But fine policies may not be implemented as planned. Therefore I commissioned a review of all professor and associate professor selection processes over the last three years, to see whether any black candidates were overlooked. Once completed, we will share the results with the national Transformation Oversight Committee as we believe the challenge and solutions are sector-wide.

When we encounter a candidate from the designated groups for whom we do not have a post, we have a special fund to employ that candidate, to provide a development opportunity for competing in future.

We are also aware of the importance of retaining black staff. So all staff who resign are interviewed to discern if UCT could have done anything to retain them. These anonymised interviews are collated and reported to the University Transformation Advisory Committee and to Council.

We have special programmes to accelerate academic careers. Normally, progressing up the ranks junior lecturer, lecturer, senior lecturer, associate professor to professor may take up to five years per stage. For example, in the last 10 years, over 600 academics have been through the Emerging Researchers Programme, which helps kickstart their research with training, supervision and mentorship, and provides research grants without requiring an established track record.

We remain frustrated at the slow progress but foresee a future with a majority of academic staff being black '“ as is already the case with non-academic staff (72% black).

What UCT has achieved in quality and global excellence is not a trade-off against transformation, but rather the consequence of the right sort of transformation '“ one which taps into the much larger and more diverse pool of talent now available to us, and builds that talent slowly and incrementally, takes no short cuts, does not compromise on quality in the short term but takes a long term view.

*This article is part of UCT's series on transformation.