A handful of stars

In the endless expansion of space, the great distances between stars are cold and terrible, writes Dennis Overbye in his book about science's quest to understand the universe, Lonely Hearts of the Cosmos. But not beyond science's understanding, says astronomer Michael Feast, an authority on the cosmic distance scale and galactic structure.

It's this work that's earned Feast a National Research Foundation A-rating, making him one of an elite corps of South African astronomers who carry the badge 'world leader'.

At the age of 87 Feast remains a prolific author, and has published another paper (on Cepheid stars, one of the tools used in studies of the cosmic distance scale) in the science journal Nature. This is another milestone in a career that has spanned 66 years - as a fresh-faced 21-year-old, his first offering also appeared in this prestigious, multidisciplinary journal.

He served as director of the South African Astronomical Observatory (SAAO) from 1976 to 1992, and as a senior research associate at SAAO from 1992 to the present. He has been an honorary professor at UCT since 1983.

Now white-haired and craggy, the still rangy octogenarian is a familiar sight, a beanpole among jostling students daily tackling the steep hill to upper campus. Few would know that the unassuming man headed for the RW James Building is listed in the International Who's Who. 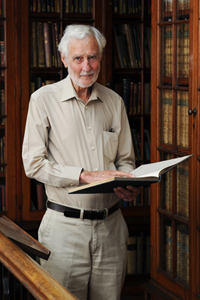 Hon Prof Michael Feast published his first paper in Nature at the age of 21. Sixty-six years later he has just published another paper in that same journal (he has had over 400 papers published in his career), the latter on Cepheid variables, stars that provide the cosmic time scale. Photo by Michael Hammond.

"It's amazing that you can get a paper in Nature on so few stars," he jokes. Astronomers study great swathes of the galaxy, sifting millions of stars through telescopes.

"But these are quite special stars."

The Milky Way, which appears as a bright band across the night sky, is part of a great disc of stars and other matter that is the most prominent component of our galaxy, explains Feast.

"Our sun is in this disc, about 28 000 light years from the centre. The region within 10 000 light years of the sun has been well studied, and it's been shown that stars are kept in the disc by the combined gravitational attraction of all the stars there."

The paper in Nature relates to what happens as one explores the outer regions of our galaxy.

Radio astronomers have used observations of hydrogen gas to show that the disc still exists there, though it's thicker than near the sun (astronomers describe this as 'flared').

"However, the density of stars is not sufficient to hold the gas in place, suggesting that dark matter of an unknown type may provide some of the gravitational force. The behaviour of the gas is difficult to study, as its distance cannot be determined in any direct way, and our understanding of the outer galaxy depends on a theoretical model."

The authors have been studying five stars (Cepheid variables) whose distances they can determine directly, and which they show to be in this flared outer disc - the first stars to be discovered there.

"These stars," says Feast, "are 75 000 light years from the sun, and up to a million times fainter than the faintest stars visible to the naked eye.

"The few stars we have located must be just the tip of the iceberg. Future work, for instance involving ground-based follow-up of observations made by the recently launched astronomical satellite Gaia, will present opportunities to probe in detail the distribution of dark matter in the outer galaxy and give clues to its nature."

Why do stars hold us in thrall?

"Astronomy is a very soft sell to the public," says Feast. "Try interesting them in nuclear physics, and see them turn off!"

His long career comes with many highlights. He's been editor of The Monthly Notices of the Royal Astronomical Society since 1993, making him, in all likelihood, its longest-sitting editor. He also served on the first Hubble Space Telescope Time Allocation Committee, which had the thankless task of determining which programmes and proposers were granted observation time.

"It's extraordinary how much science has changed in all that time," Feast says, referring to the span of his career. "There's so much more to learn these days. It was so simple when I was a student. Practically, if you could add you were alright."

He recalls his introduction to astronomy. Feast was involved in laboratory physics in Canada when he got the opportunity to work at the British-run Radcliffe Observatory in Pretoria, which in the 1950s was the largest telescope in the Southern Hemisphere.

"I came in during the photographic era and spent many years of my life taking photos of the spectra, photos of stars and their fields, and getting my fingers dirty working with plates. That's all changed, and the technology of telescopes is so much more complex. With today's telescopes we can see much deeper - and in much greater detail.

"When I came into astronomy we were just getting used to the idea that the universe is expanding. Now we're so much closer to the physics, or the particles the universe is made of, although there are still many questions to be answered."

Projects like the Square Kilometre Array require a different kind of astronomer, he says.

"You've got to be able to play in a very large team and be one very small component."

There's a parallel there, in the cosmos.