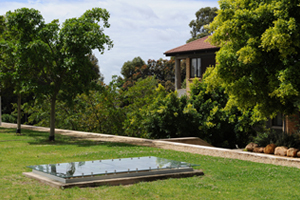 A peek into the past: Under the glass rests the remains of a cemetery wall on the Rustenburg site where slaves were buried in the eighteenth and nineteenth centuries, and on which UCT's New Economics Building now stands.

What is the nature of our responsibility to the dead?

This was one of the questions posed by Professor Pierre De Vos at UCT's new dialogue series that marks Emancipation Day, which in turn commemorates the abolition of slavery in the Cape, on 1 December 1834.

The first event of the series '“ Rustenburg Memorial Conversations: Commemorating Emancipation Day '“ was co-facilitated by the Office of the Vice-Chancellor and the HIV, Inclusivity and Change Unit (HAICU) and brought together several stakeholders, including UCT academics and some members of the public, at the end of November.

De Vos co-presented a paper with fellow legal expert Professor Jaco Barnard-Naude at the first of the annual series which will serve as part of the ongoing memorialisation of the Rustenburg slave burial site believed to be in the proximity of the New Economics Building on UCT's middle campus.

"Why do we feel responsible? How do we honour [the dead], and when?" De Vos asked the audience. He continued: "Do we honour some more sincerely, reverently and insistently than others? A starting point for responding to these types of questions would be to admit that one of the major reasons we feel responsible to the dead on whose graves we dwell in turn, is that the dead are never simply confined to the past.

"As memory, the dead remain alive in the ghostly form of memory in the present, and, as such, undeniably influence and contribute to how we ethically recognise their influence on the present."

Barnard-Naude added: "We considered the question of the memorialisation of the Rustenburg slave memorial site in the context of what is going on in the world and in post-apartheid South Africa '“ our global condition '“ which seems to depend on a very particular way of dealing with space.

"That way of dealing with space is through demarcation, separation by way of physical structures. So it was significant to us that what was memorialised here already is in fact the remains of the wall, once again. The wall keeps figuring in the consideration of the space, how the space is dealt with, how we deal with an authentic idea of post-apartheid living, of post-apartheid togetherness, not simply a perpetuation of the spatial legacies that so starkly marked apartheid.

The dialogue series is one of the developments to stem from UCT's Public Participation Process (PPP) around the Rustenburg burial site. Launched in 2007 in accordance with the South African Heritage Resources Act for the burial ground and prior to construction, the PPP involved open forums with the UCT community and the broader public.

The site is thought to be the final resting place for slaves that worked on the farms along the Liesbeeck River in the 17th and 18th centuries. Although no relics were found during the extensive excavation undertaken by the university's Department of Archaeology, a glass encasement now protects what is believed to be a portion of the graveyard's boundary walls.

Speaking at the event, the Vice-Chancellor, Dr Max Price, said: "A series of meetings over two years examined all of these options from the details of how close could you build the building to the cemetery wall without causing offence'¦to the issues of what is the best way to represent and take this history forward."

Ebrahiem Manuel, a community historian and a founder member of the Heritage Museum, also addressed the audience and stressed that it was important to learn the lessons of the past and to acknowledge the memories of the slaves and exiles.

"It's also very important for the students to know what happened in the past so that it doesn't happen again," Manuel concluded.

"We are inviting artists and curators to think about how we might use the space downstairs in the Economics Building," said Professor Crain Soudien, Deputy Vice-Chancellor. "We hope that by next year this time, we'll remember the space on the space."

Watch a clip of the 2013 Rustenburg Memorial Conversations here: