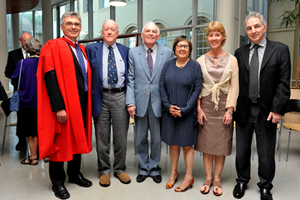 They came from across the globe - the United Kingdom, Australia, Canada and Israel - 50 years after graduating from UCT as young doctors in 1963.

Of the 97 who graduated that year, 46 made their way back to the medical campus for a reunion weekend in early December, the highlight of which was a Golden Jubilee 'regraduation' ceremony in the Wolfson Pavilion.

The attendees represented over 55% of the surviving class, and just under half of the original class. And 22 of these medical alumni were from abroad.

There were many other familiar faces at the regraduation.

Another special guest was Dr Donna Stokes, CEO of New Somerset Hospital. The hospital has a special place in the memories of the Class of '63. Founded in 1862 and Southern Africa's oldest hospital, Somerset Hospital was UCT's first teaching hospital in 1920, until Groote Schuur Hospital opened in 1938.

Importantly, it offered a training ground for students of colour who were otherwise restricted at Groote Schuur Hospital.

The reunion was also attended by Vice-Chancellor Dr Max Price and new Dean of Health Sciences, Professor Wim de Villiers, who both addressed the medical alumni. 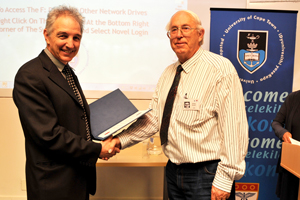 Special award: VC Dr Max Price (left) presents a special award to Dr Douglas Kroon for the significant and unique impact of his work on the ecology and taxonomy of the moths and butterflies of Southern Africa. Kroon is part of the MBChB Class of '63 who gathered for their 50th reunion and regraduation ceremony in early December.

But as they stood in silence to remember those classmates who had died in the years after graduating, they also remembered former President Nelson Mandela who died on 5 December, on the eve of the reunion.

Price reminded the gathering that 50 years ago, the historic Rivonia Trial had taken place, with Mandela and other leaders of the ANC in the dock. It was a momentous time in the country's history to be a young doctor, he said.

Even then, many of the new graduates went abroad to work, starting a brain drain that was to accelerate in the decades that came, said organiser Dr Ashley Robins, one of the Class of '63.

"So it's gratifying that so many people were prepared to come all this way," added Robins who retired in 2005 but has remained active at UCT as an honorary senior lecturer in the Department of Medicine.

In regraduating, the group reaffirmed the oath they took 1963. The address was delivered by Dr Lynne Heselson (Canada), whose father was a prominent surgeon and whose mother was a teacher at the Child Guidance Clinic.

Back in 1963, Robins was nominated to deliver the address at the oath ceremony on behalf of the class and a recording of this was played at the regraduation ceremony, much to the surprise of all present.

Jacobs called up members of the class who were presented to and greeted by the Vice-Chancellor.

Two special awards were conferred. The first went to Dr Donald Nuss for his innovative, minimally invasive technique, internationally known as the Nuss Procedure, and which revolutionised the management of pectus excavatum, an abnormal development of the rib cage where the breastbone caves in, resulting in a sunken chest wall deformity.

The second was made to Dr Douglas Kroon for the significant and unique impact of his work on the ecology and taxonomy of the moths and butterflies of Southern Africa.