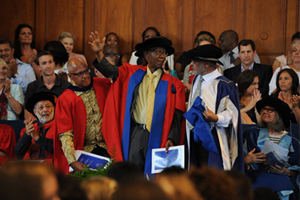 Honorary degree: "Epic linguist" Prof Daniel Kunene greets graduands and their families after being awarded the degree Doctor of Literature (honoris causa) at the afternoon graduation ceremony on 13 December.

Renowned literary figure and scholar in the fields of translation and critical appraisal of African literature Professor Daniel Kunene was awarded the degree Doctor of Literature (honoris causa), at the afternoon graduation ceremony on 13 December.

Through his translations Kunene has contributed to exposing African culture to the rest of the world. Kunene is one of three candidates on whom honorary doctorates were conferred during this graduation cycle.

"Vice Chancellor, I have the honour to present, for the award of the degree of Doctor of Literature, honoris causa, Daniel Pule Kunene.

"This is the chant of the preschool Daniel Pule Kunene. He is sitting on the floor of the cooking area of his home, the house he grew up in, whilst his mother is doing household chores. He remembers: 'I'm watching a sunbeam from a hole in the tin roof slowly moving across the floor, flickering at the edges, little tiny leaps, continually changing shape, and ultimately dying as the sun sweeps across the roof and leaves the hole in the dark, so to speak, until tomorrow.' He hears himself chanting absent-mindedly. Somehow, with the movement of the sun, and the mantra of the consonants, he had discovered the music of Sesotho, his mother tongue. 'P' ke 'B'.

"He was already fascinated by how his parents could take a language and make it the vehicle of a narrative, by how the sounds could be moulded into spoken music and how the spoken music could become intriguing and exciting stories. Many years later, this interest in sounds and languages became the focus of his PhD thesis at the University of Cape Town and, in fact, the focus of his life's work.

"Kunene was born in Edenville, near Kroonstad, and completed his BA through UNISA in 1949. This was followed by an MA, a Secondary Teacher's Certificate and a PhD, all from UCT. Kunene is currently a Professor Emeritus at the University of Wisconsin-Madison but has also taught at the University of California Los Angeles, the University of London, the Johannes Guttenberg University and at UCT. His literary contributions include poetry, short stories, monographs and translations. His poem Soweto was set to music for choir and orchestra and his translations have won wide acclaim, including the Karel Capek medal, for'"translation from a language of limited diffusion'.

"The live, participating, critical audience disappears; the voice, the mimetic gesture, the facial expressions, the dramatic action - are gone. In the written tradition, the writer works in isolation with an audience that has dwindled to a single reader. But the oral storyteller who tells on paper must find a way to introduce the audience back into the story, must find a place for the communal voices, for the anonymous gossipers, for the running moral commentary and for the story teller to enter and exit at will. What is required is a new approach, one that allows us to hear the sound that is silenced by the page, one that is poetic and polyphonic, and one that takes us back into the communal fold and that captures the spiritual glow of shared stories.

"Daniel Pule Kunene has done just that. Not only has he succeeded in describing, analysing and categorising poetic rhetoric, but his new analytical approach has generated a methodology and thus has vital implications for the study of other oral traditions.

"In the literary landscape, he is a courageous dew-drier, an avid pioneer, finding the new path and risking the hidden dangers of unexplored terrain.

"Vice Chancellor, I have the honour to invite you to admit to the degree of Doctor of Literature, (honoris causa), Daniel Pule Kunene."