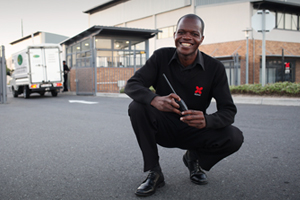 When Willson Tarusarira came off night shift at his workplace on the outskirts of Cape Town International Airport, he'd go straight to class at UCT if it was a weekday.

Tarusarira would work 12-hour stints and then attend class between eight and five, taking a taxi or bus from work. Once, he worked straight through four days and nights: work, class, work, class–

"I sometimes struggled to stay awake,â€ said the 33-year-old Zimbabwean security guard, who graduates on 11 December with a postgraduate diploma in disability studies, a one-year course offered by UCT's School of Health and Rehabilitation Sciences.

"I knew that by not getting seven to nine hours of sleep, I was starving my brain. But I did not have any option.â€

The only advantage was that in the quiet hours of deep night, between patrols, he could read and draft assignments.

He even gave up TV, except for the 7pm news.

Born in Rusere, Zimbabwe, Tarusarira went to school on the sugar cane plantation where his father worked. He attended secondary school in the country. Keen to teach, he enrolled first at a teaching college and then at the University of Zimbabwe, completing undergraduate studies in 2004.

But Zimbabwe's political and economic woes forced him south. Without asylum papers, he couldn't get work. When they did come he enrolled for a security course, and went to work as a security checker in Wellington. Although he was keen to study further, he had a family to support on a modest budget.

"I kept calculating my years and I was always upset because the clock was rotating while I was not studying!â€ Friends told him he was too old to go back to school.

"But I certainly knew you are never too old to set another goal or to dream a new dream,â€ Tarusaria said. "I also learnt that you must keep company only with people who uplift you, whose presence calls forth your best.â€

UCT's emphasis on research was the clincher when he was looking for a suitable university at which to embark on disability studies. The institution is also internationally known, says Tarusarira. He also liked the cosmopolitan feel of UCT.

Importantly, the diploma course changed the way he thinks about people with disabilities. Tarusarira is from the remote Zaka district in Zimbabwe, where disability is still associated with sin.

"It's from such cultural beliefs that disability is associated with punishment from the ancestors because of your parents' sin. Mothers with disabled children are called names and the community does not want to associate with them, because they believe they have done something wrong to the ancestors. This further exacerbates the plight of the disabled children, since they're kept indoors.â€ By interacting with members of his university class, particularly those who're disabled, Tarusarira says he grasped the essential difference between disability and inability.

"I can now do awareness programmes in my own areas to correct this antiquated way of thinking.â€ The Zimbabwean diaspora has seen other family members displaced. Tarusarira's older brother, Joram, is doing a PhD in Germany. "He is my role model,â€ says the younger brother. "At times I lost hope, but kept telling myself that even if I fell on my face, I would still move forward.â€

Tarusarira is now thinking of a master's degree, and possibly a PhD. "I have faith I can be a doctor soon, if I work hard. I am not yet done.â€

He will miss his close family at graduation, but has sent money home to fund a celebration. "My father and everybody else back home are happy for me.â€

Come 11 December, there will be a small corner of Zimbabwe that's bound to be partying well into the night. At the airport behind his workplace, the air vibrates with the roar of jet engines; people are going places, exploring possibilities. "Go where you want to go. You are your own pilot,â€ says Tarusarira.