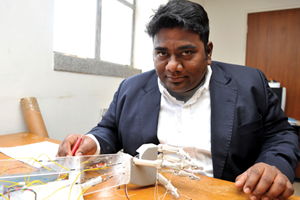 Indigenous technology developed partly at UCT is helping leprosy patients in India, where a new 'tactile' or smart glove is being tested.

The technology tracks pressure points on the palms and fingers and helps prevent injuries to hands and digits as a result of nerve damage and sensory loss. It is being tested at the Leprosy Mission Hospital in New Delhi, India.

Some 95% of people are naturally immune to leprosy, caused by mycobacterium leprae and resulting in progressive damage to skin, nerves, limbs and eyes. Leprosy does not cause body parts to fall off, although they can become numb or diseased as a result of secondary infections because the primary disease compromises the body's immune system.

Though curable, thanks to multi-drug interventions, patients often suffer a 'secondary tier' of injury and disability because they can't feel the heat or pressure that often destroys tissue and results in amputation.

But those who develop the disease are prone to nerve damage.

With 232 000 (globally in 2012) new cases each year, India has the highest concentration (about 56% of the global burden) of leprosy, followed by Brazil (interestingly, Ireland recently reported two cases), and in India there are dedicated leprosy hospitals.

In South Africa, the figures are low, some 50 to 70 new cases annually, predominantly in the Eastern Cape and from neighbouring countries like Swaziland and Mozombique. Dr Sudesh Sivarasu (30) of Biomedical Engineering in the Department of Human Biology believes in developing simple biomedical solutions to problems like these.

Sivarasu took an off-the-shelf fabric glove to model his own; a stretchable glove that uses a revolutionary fabric with in-built nano-sensors.

For example, a patient with hand nerve damage can't feel the heat from a metal mug of tea (metal is a preferred domestic material in India). "We've created an artificial sense of touch," he said. "The fabric picks up haptic factors like roughness, temperature, pressure, and humidity." The glove also maps the individual's hand usage to establish where the pressure variations are during simple domestic activities like cutting wood or cooking. These are recorded to show where ulcers are likely to develop.

Patients, who often live far from hospitals, can administer preventative care, especially to the fingers.

"Because of wound infection, the digits are the first to go in leprosy patients and amputation usually follows," said Sivarasu.

His invention was covered by the BBC-Health Check programme and he travelled to the Leprosy Colony on the Delhi-Haryana border for the film, later telecast on BBC World. This work was presented at the Appropriate Healthcare Technologies for Developing Nations International Conference in London.

And in September he presented a paper on the glove at the International Leprosy Congress in Brussels where he and Sathish Kumar Paul (36), his PhD student in India, won the Young Scientist Award and Best Oral Presentation Award.

"We want to make this glove widely available."

Born and educated in India, Sivarasu said he'd experienced the despair of seeing a loved one die because of the prohibitive cost of medical intervention in India.

Many diseases are treatable - but the means is unaffordable.

In South Africa, where 90 to 95% of medical equipment is imported with up to 300% mark-up, the excessively high cost is passed on to the patient. "This in a country with world-class engineers and clinicians," said Sivarasu, whose watchwords are 'affordable' and 'simple'. "It's quite burdening." It's motivated him to develop indigenous technology. He and his team of postgraduate students have come up with a number of innovative, inexpensive solutions to common medical problems, like locally designed drip lines for re-feeding. Little more than a coil of thin plastic tubing with a plastic drip chamber attached, they're currently imported from Germany.

"How many of these do you think we use daily in South Africa?" he asks, uncoiling a sample from hermetically sealed packaging. "Thousands and thousands."

Some solutions are deceptively simple, and make you wonder: why didn't we think of that before? "We're thinking out of the box," Sivarasu added. "Too often we get stuck in a cycle of novelty and academic outcomes. We want to be able to make things easier, make it cost-effective - and get it to the masses."

It's also about the uniqueness of the patients themselves, so there's an 'in situ' aspect to his biomedical designs.

For his PhD (which he got at the tender age of 26), Sivarasu developed a high-flexion artificial knee implant for Eastern cultures, where people squat or sit on low platforms. Western prostheses don't provide the 120-degree flexion extension, the range needed for comfort when semi-squatting.

With a special interest in rehabilitative engineering, Sivarasu is inspired by everyday things. After watching the 2009 epic movie Avatar, he began to develop a paraplegic walker.

"It's scientifically challenging," he muses, "but we want to be helpful to people."