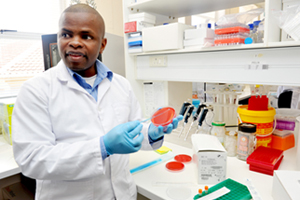 Young children participating in studies on childhood bacterial pneumonia in future can expect to suffer less discomfort and indignity. This after the World Health Organisation (WHO) decided to change its recommendation after a study was completed at UCT.

The study looked at the type of swabs that are used in the detection of one of the main causes of childhood bacterial pneumonia. Instead of endorsing the use of swabs with either a calcium alginate or Dacron polyester tip, the WHO working group will advise researchers to use flocked swabs, following a UCT study that found these swabs were not only more comfortable for the children, but also far more effective for the recovery and detection of Streptococcus pneumoniae (pneumococcus), which is responsible for more than 40% of all bacterial pneumonia cases worldwide.

Given the stats, this change in protocol will benefit a high number of children in Sub-Sarahan Africa: Globally, pneumonia accounts for 18% of childhood mortality in children under the age of five years, resulting in the death of 1.6 million children per annum. No fewer than 70% of these deaths occur in sub-Saharan Africa and India.

Felix Dube, a doctoral student from the Division of Medical Microbiology and one of the researchers in the study, says the flocked swabs are so effective in specimen collection because of tiny bristles that are electrostatically attached to the end of a very flexible plastic shaft. The flexible shaft means the swab head "finds its way to the back of the nose, causing minimal irritation on the way," clarified Dube.

The Dacron and calcium alginate swabs are constructed by winding the respective fibres around an aluminium shaft, which is likely to cause more discomfort for the children. 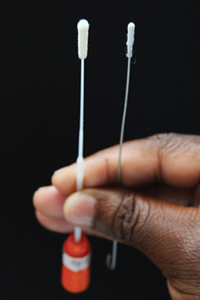 Spot the difference: The flocked swab (left) is more effective than the Dacron swab (right) in detecting the pneumococcal bacterium, which accounts for most bacterial pneumonia cases in children.

These preliminary findings fall within a broader longitudinal birth cohort study, the Drakenstein Child Lung Health Study, that is funded by the Bill and Melinda Gates foundation. This study investigates the etiology and risk factors for the development of childhood pneumonia in the Drakenstein region in the Western Cape. The timing of acquisition, intensity of colonisation and interaction of the pneumococcus with other respiratory pathogens are likely to be key determinants for progression to pneumonia. "We're interested in anything we can find that will lead to an explanation of why some children are carriers, but don't get sick, while others develop pneumonia," says Dube.

Finding optimal strategies for specimen collection is crucial to assess the impact of pneumonia vaccines, and in this case, to establish how the organism goes from being harmless to causing disease.

According to the study, "the ideal swab would be highly absorbent, maintain the viability of microorganisms, release most of the specimen material into culture broth or transport medium, and not inhibit culture or nucleic acid amplification". The latter is the process by which the type of organism (virus, bacteria, etc) is detected using its DNA.

Flocked swabs tick all the above-mentioned boxes. Furthermore virology studies use flocked swabs for detecting viruses. This caused Dube and his fellow researchers to conclude that "the use of a single swab type for both viral and bacterial studies would simplify specimen collection protocols".